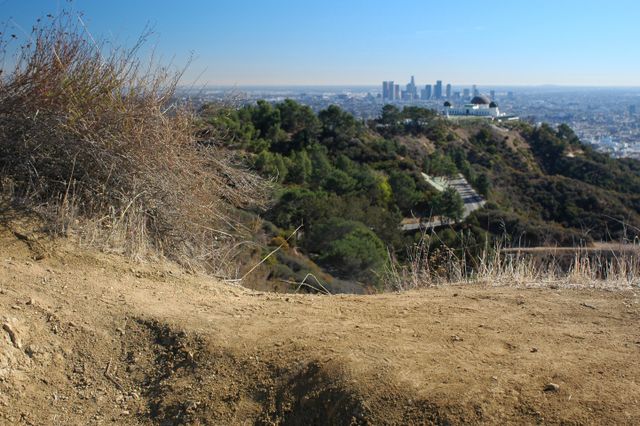 When Gov. Jerry Brown recently approved $687 million in relief funds to cope with the state’s devastating drought, he noted, "This legislation marks a crucial step, but Californians must continue to take every action possible to conserve water.”

Yoram Cohen is working on it.

For the past two years, in the backyard of a house in West Los Angeles, the UCLA professor of chemical and biomolecular engineering and director of the Water Technology Research Center has been field-testing a “vertical wetlands” that mimics a wetlands in nature. That’s when dirty water gets naturally filtered as it runs through an expanse of plants, rocks, soil and indigenous bacteria as it makes its way to a river or other waterway. 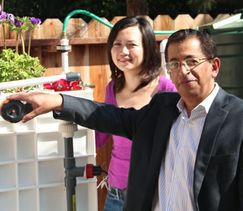 The Gray2Blue pilot system, with its maximum output capacity of 560 gallons of reusable water a day, could conceivably save Californians billions of gallons of water. But it would require changes to state water regulations that, in many ways, slow the march toward water sustainability.

Cohen is working on that too.

“I’ve reached a stage in my life where I want to see things happen, not just find ways to solve problems from the technical viewpoint. Sometimes the impediments [to problem-solving are really a combination of technology and policy,” said Cohen, who has been working on water reclamation, recycling, reuse and desalination for much of his 30-year career at the UCLA Henry Samueli School of Engineering and Applied Science. He is also a member of the UCLA Grand Challenges project team working towards its goal of "Thriving in a Hotter Los Angeles: Achieving 100% Sustainability in Energy, Water and Biodiversity by 2050."

Cohen is working in collaboration with chemical engineering Ph.D. student Zita Yu, whose research focuses on the development of Gray2Blue and the policy and economic aspects of onsite graywater treatment and reuse in urban and rural areas. Also onboard is the Luskin Center for Innovation at the UCLA Luskin School of Public Affairs. Their intent is to build a case for California regulators and residents alike to rethink how we use water. 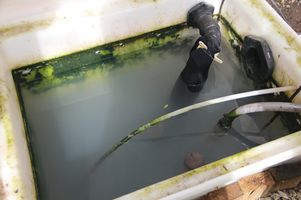 “There’s been this whole idea that you use water once, and then you dump it in the sewer,” said Cohen. “That’s been the mindset.”

Gray2Blue, a refrigerator-size contraption of white plastic crates and plumbing topped with a patch of colorful flowers, challenges that notion. Graywater is pumped into the flower bed and, over a period of about three hours, percolates down through a two-foot layer of plant roots and soil that act as “phytoremediators” that filter out particles and contaminants. The water then passes through a biofilm layer of scum-eating bacteria and finally drips like gentle rain into a collection bin connected to irrigation pipes and a storage tank.

Reusing gray water isn’t a new concept, the researchers say, but Gray2Blue takes it to a whole new level. The water it produces is of high enough quality to meet California’s Title 22 standards for tertiary, disinfected, reclaimed water — water for aboveground, non-potable reuses like sprinkling a lawn or flushing a toilet. But under current regulations, Cohen noted, treated gray water can be used only sub-surface, as in the test home’s underground irrigation system. That leaves a large quantity of high-quality, filtered water going to waste, while the home’s above-ground lawn sprinkler and toilets continue to draw from the household’s supply of potable water. 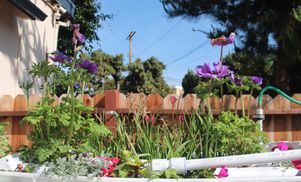 Gray2Blue’s efficiency in harvesting high-quality water bolsters Cohen and Yu’s determination to persuade policymakers to reassess state water regulations. To this end, the researchers have been producing policy papers, including a recent analysis of water regulations in all 50 states.

California, with its long tradition of environmental awareness, has some of the strictest standards, Cohen noted. “I don’t fault that,” he said. “But I think we also need to be more progressive.”

Also in need of revision, he said, is the regulatory process for certifying a system like Gray2Blue. Currently, the state requires individual homeowners to regularly monitor and report on water quality if they install such a system.

“This puts a tremendous burden on the homeowner as if he or she were a major water treatment plant,” said Cohen. Instead, he said, regulators should certify not the individual users but the Gray2Blue system — the same way that household appliances are certified.

“When you get a stove, the stove is certified that it’s not going to emit carbon monoxide. You’re not required to continuously monitor your stove,” said Cohen. “You have to streamline the [graywater treatment] regulatory process rather than impose additional burdens on people.” Otherwise, he’s concerned that some people, pressured by the drought, will use gray water without treating it. “And then it becomes a health and potentially environmental issue.”

Cohen and Yu have also engaged in exhaustive number-crunching to determine everything from how much water the state can conserve to how much money homeowners can save: Every day a typical Californian uses about 198 gallons of water, about 62 gallons of it indoors. About half of that — some 31 gallons — ends up as gray water that could be filtered and reused. Multiply that by 37 million Californians, and that’s 1.1 billion gallons of potable water that could be saved every day.

With water rates in the city of Los Angeles currently running about $10.60 per 1,000 gallons, homeowners will save money with a system like Gray2Blue. They’ll also save on sewer charges, because water reused for watering a lawn doesn’t end up down the drain. This also helps relieve overloaded septic systems in homes that do not have sewer services.

By Cohen and Yu’s calculations, Gray2Blue — which was constructed with off-the-shelf components that run around $500-$600 or $1,300-$1,500 with the addition of an irrigation computer timer for the water pumps — could pay for itself in six months to two years. And the savings after that could add up to $2,000 a year. Cohen suggested that the state could offer homeowners a financial incentive, as it does with solar panels, to make the return-on-investment even faster.

The researchers have demonstrated the system to local and state officials, among them the Metropolitan Water District of Southern California — which provided some funding for their research — and the  L.A. Department of Water and Power. Cohen and Yu have also been presenting their work at water conferences nationally and internationally. Yu recently showed Gray2Blue to officials in Hong Kong’s Water Supplies Department, which is exploring options for gray water and who were also very interested in learning about U.S. regulatory incentives and impediments.

“Our approach has been to make this technology simple, affordable and one that can contribute to solving some of our water problems,” said Cohen. “It isn’t the only solution … there isn’t just one magic solution to all of our water problems. We have to increase our water portfolio, and this is one way to do that.”
Tags: engineering | environment | research | water
Share