Biochemistry and structural biology are surprisingly — at least to the uninitiated — visual fields. This is especially true in the study of proteins. Scientists like to see the structure of proteins within cells to help them truly understand how they work, how they don’t work or how they can be modified to work as they should. That is, how they can be targeted with drugs to cure disease.

Current methods, however, have their downsides. Many widely used techniques require large amounts of protein for analysis, even though many diseases are caused by proteins that are far from abundant or that are difficult to amass in large quantities. A new method pioneered by a professor who recently joined UCLA overcomes this challenge, offering untold potential in the exploration of disease and treatment.

Called “MicroED,” for micro-electron diffraction, the technique uses high-powered electron microscopy to determine the structure of proteins with atomic precision, using samples that are only one-billionth the size required by other imaging methods.

Tamir Gonen, a new professor of physiology and biological chemistry at the David Geffen School of Medicine at UCLA, is the developer of MicroED. For the past five years, Gonen has been spearheading the exploration of MicroED in his lab at the Janelia Research Campus of the Howard Hughes Medical Institute near Washington D.C.

Now, in joining UCLA’s faculty, Gonen’s goal is to set up a lab centered on this new imaging tool. Already the university is using the technique in the labs of Jose Rodriguez, assistant professor of biochemistry, and David Eisenberg, a professor of chemistry and biochemistry and of biological chemistry. Both use MicroED to view the structures of proteins involved in neurodegeneration.

“With MicroED, the way we think about disease is going to be different,” Gonen said. “Because it uses minute samples and the resolution we get is very high, problems that were beyond our reach are suddenly attainable. We can see individual atoms and even peer deeper into subatomic space and see things that have not been seen before.” 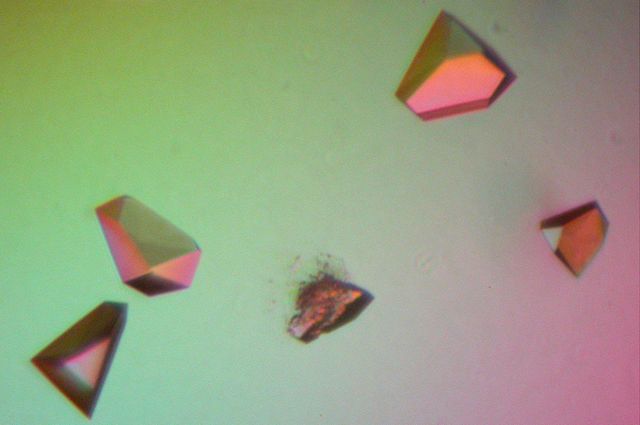 Gonen lab
Samples used in MicroED resemble jewels with one exception, they are made out of biological material rather than precious mineral.

Since 2013, which marked his publication of a proof of principle paper on MicroED, Gonen has been an advocate for the technique. As other researchers have come to understand the long-sought imaging potential MicroED offers, about 20 institutions worldwide have begun setting up MicroED labs, many with Gonen’s help.

“I have fantastic folks working in my lab, and they are extremely collegial and want to help others get their science done,” Gonen said.

That focus on getting “science done” — and MicroED itself — has enormous ramifications for the treatment of HIV, Parkinson’s, Alzheimer’s and other neurodegenerative diseases. “When you’re talking about drug discovery, it’s a whole new ballgame,” Gonen said.

Gonen’s development of MicroED stemmed from his study of cell membranes, specifically the protein gateways within those membranes.

These gateways can help cells maintain healthy homeostasis in which everything works as it should — think of it as a biological “peace.” When things go wrong, however, as happens with disease, these gateways might allow too much of one substance, such as water or sugar, in or out. 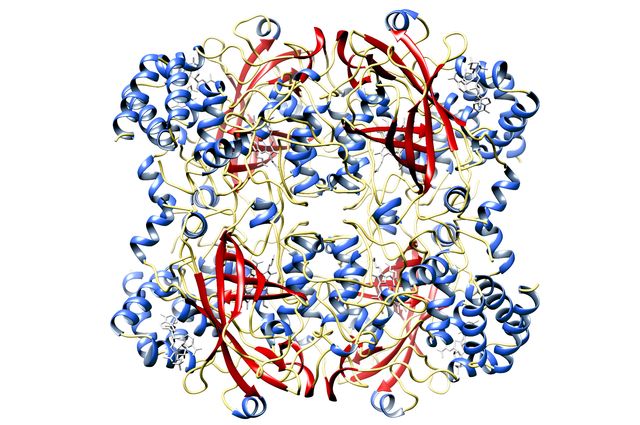 Gonen lab
This illustration of a protein shows an example of a structure that could only be determined by the capabilities of micro-electron diffraction.

Gonen knew that targeting these gateways — or targeting their function — could lead to innovative ways to control disease and help patients. But he and other scientists needed good images to facilitate the design of better drugs.

“More than 90 percent of all medicines sold these days target G-protein coupled receptors,” Gonen said. “When you feel pain, when you see light, when you taste, when you have any neurological sensation, all of this is occurring because of these receptors.”

Another potential, and timely, target of this type: opioid receptors. “Opioids are an increasingly challenging problem, and not surprisingly there exists an opioid receptor,” Gonen said.

MicroED makes it possible to image these G-protein coupled receptors, which move around a lot. This movement has made it difficult for traditional methods to capture images of them.

MicroED’s potential goes far beyond such receptors, however.

Larry Zipursky, a distinguished professor biological chemistry and the leader of the neuroscience research theme at the David Geffen School of Medicine at UCLA, called the approach “revolutionary.”

“This technique uses a rational approach to disease,” Zipursky said. “It allows researchers to assess the structure of abnormal proteins that give rise to disease; from this structural determination, they can assess the disease in a more strategic way.”

Gonen is enthusiastic about the larger potential as well. “For a medical school, this is going to be quite a resource for pushing research forward. I’m hoping to collaborate with a lot of people.”

In fact, he’s already working on several projects, including one that points to a way to make more efficient HIV medicines. This is in addition to the projects with Eisenberg and Rodriguez, who’s studying the conversion of proteins from a normal state into an abnormal, clumped — or aggregated — state, as seen in Alzheimer’s and other diseases of the brain and nervous system.

“We need new and better treatments for neurodegenerative diseases, one way to achieve this is to understand how atomic scale changes in the brain lead to disease. What do the structures look like before and after, and, quite simply, how are they so toxic?” Rodriguez said. “MicroED may finally open the door to that understanding.”

The potential of such collaborations is what brought Gonen — and his emphasis on MicroED — to UCLA.

“What I like about UCLA is it’s a top-rate institution — you can find some expert in every field,” Gonen said. “They’re a world leader, but they come without the ego you may find at other institutions.”