UCLA Professor Emeritus of Biochemistry Paul Boyer, who won the 1997 Nobel Prize in chemistry for his pioneering research on how adenosine triphosphate, or ATP — the cellular energy that drives all biological reactions — is formed, died June 2 at age 99.

Boyer, a member of UCLA’s faculty since 1963, called ATP “the currency of cells.”

“It’s an experience of a lifetime,” Boyer had said of winning the Nobel Prize. “The support of basic research by our society makes this kind of work possible. I feel like one of the most fortunate people to have the opportunity to satisfy my own interest in how things work. I just happen to be lucky.”

Boyer devoted his research career to the study of enzymes, particularly to the study of oxidative phosphorylation — the process in which the energy that the human body gets from the combustion of food is converted largely to ATP. Every cell function relies on ATP, from the building of bones to the contraction of muscles and the transmission of nerve impulses.

ATP absorbs the chemical energy released by the combustion of nutrients, a process that includes photosynthesis in plants and digestion in animals, and transfers it to fuel functions that require energy, such as the growth of cell parts, the contraction of muscles, and the transmission of nerve messages. Substantial quantities of ATP are produced and consumed by the human body each day. 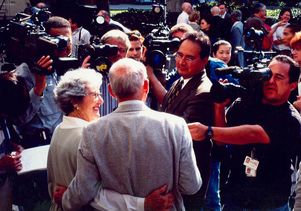 The mechanisms by which ATP is made are highly complex and challenged scientists for decades. Boyer’s insights helped illuminate the world’s understanding of these processes. Over several decades, he developed a model of how the various subunits of the ATP enzyme work together as a motor, driving the rotation of a central rotor. Boyer’s model, based on biochemical experiments, was later confirmed by structural studies. Starting in 1948, Boyer’s research was supported by the National Institute of General Medical Sciences, with additional funding from the National Institute of Diabetes and Digestive and Kidney Diseases.

“Paul Boyer inspired both trust and ambition in his fellow faculty members, and had perhaps the most positive character of anyone most of us have ever known,” said his friend and colleague David Eisenberg, who is UCLA’s Paul D. Boyer Professor of Molecular Biology and a Howard Hughes Medical Institute investigator. “He combined true modesty with unstoppable persistence and unmatched personal interactions.”

When Boyer won the Nobel, Albert Carnesale, who was then UCLA’s chancellor, said, “Professor Boyer is a humble, gracious and dedicated researcher and faculty member who has spent decades working on giving the world a greater understanding of energy storage in cells. Everyone at UCLA is extremely proud of Professor Boyer and this honor he so richly deserves.”

Among his many honors, Boyer was elected to the National Academy of Sciences in 1970, and won a Guggenheim Fellowship in 1955. From 1959 to 1960, he was chairman of the biochemistry section of the American Chemical Society and from 1969 to 1970 he was president of the American Society of Biological Chemists.

In 1963, Boyer was recruited from the University of Minnesota to the division of biochemistry within UCLA’s department of chemistry. As soon as he arrived, recalled Steven Clarke, distinguished professor of chemistry and biochemistry, Boyer became involved in the nascent Molecular Biology Institute and the plans for a new building to house it. In 1965 he was chosen as the founding director of the institute and served in this capacity until 1983.

He was largely responsible for the Molecular Biology Building that opened in 1976 to serve some 30 faculty members from a wide variety of UCLA departments. In 2000, the building was renamed in his honor. He also spearheaded the organization of UCLA’s interdepartmental doctoral program in molecular biology, which now includes about 100 students.

Paul Boyer donated a major share of his Nobel Prize award to provide funding for chemistry postdoctoral fellows at UCLA and two other institutions.

Clarke, a subsequent MBI director, said “Paul’s contributions to the biosciences and to UCLA’s biosciences community were truly transformative. Not only was he the heart and soul of the Molecular Biology Institute, overcoming great odds to make the MBI building a reality, but perhaps most of all he succeeded in finding new ways to enhance the research, teaching and mentorship of the 200 or so UCLA faculty in molecular biology. He leaves a lasting mark on UCLA science.”

Boyer has donated his brain to UCLA for research on Alzheimer’s disease and dementia.

UCLA is planning a memorial service. Details will be posted on the UCLA Chemistry and Biochemistry website.