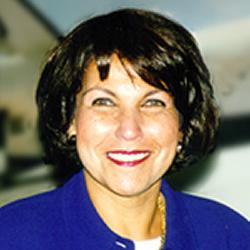 Maha Ashour-Abdalla, a professor of physics with expertise in space plasma physics and a passion for teaching, died May 1. She was 71. Until very recently she was actively working on research and teaching. Her colleagues and students praised her as extremely dedicated, charismatic, engaging and loyal.

Born and raised in Alexandria, Egypt, Ashour-Abdalla excelled in mathematics and finished high school very young: She was in college at age 15.

“I wanted to do physics in college, but that was not for a young lady in Egypt,” she told the UCLA Newsroom in 1999. “My parents were really against it, but they thought within a year, I would come to my senses and change to literature like a normal person.”

Fortunately for her students and for the physics community, she never lost her love for physics.

After completing her B.Sc. at Alexandria University in 1964, she received a scholarship to pursue graduate studies at Imperial College in London, where she earned her Ph.D. in 1971. She then became a research scientist at the Centre National d’Etudes des Telecommunications in France before moving to Los Angeles, where she was a geophysics researcher in the UCLA Institute of Geophysics and Planetary Physics from 1976-1985. She was appointed as a professor in UCLA’s Department of Physics and Astronomy in 1985.

Her undergraduate physics courses were very popular, including with non-physics majors; she was awarded the Outstanding Teacher Award from the UCLA Department of Physics and Astronomy 11 times.

“I enjoy working with undergraduates and find nothing more rewarding than seeing a student understand who was having a hard time,” she told the UCLA Newsroom. “I go through the steps one by one, no matter how long it takes. It's like running a race with them, and you're out of breath sometimes, but it's worth it when we make it to the finish line.

"Let's be honest: The best science students are going to learn anyhow. They don't need to be pushed. I prefer to teach students who hate physics. I tell them not to be intimidated. They can all do it once the fear is removed."

In 1999, Ashour-Abdalla was instrumental in the success of a first-of-its-kind teaching experiment, called Transpacific Interactive Distance Education (TIDE), in which UCLA and Japan’s Kyoto University — overcoming their 14-hour time difference — jointly taught two classes in which students, in real time, could see and hear one another and the professor at both sites. each classroom The courses — space physics and beginning physics for non-science majors — combined live lectures and synchronized interactive multimedia.

In the space physics course, which Ashour-Abdalla co-taught with Kyoto University professor Hiroshi Matsumoto, she used videos and computer visualizations to demonstrate how the Earth’s environment changes in response to solar activity. Hands-on computer simulations were an integral part of her class, enabling students to experiment by themselves on the effects of varying solar wind parameters on geospace.

Ashour-Abdalla gave a great deal of thought about how best to teach in the TIDE program's multicultural environment.

“Japanese classes tend to be rather static,” she said at the time. “In Japan, the professor typically stands at the podium and gives a lecture, and the interaction between the professor and students is minimized. Our students would not accept it if we stood still; we would lose them. I learn students’ names and encourage them to participate. I ask for volunteers to go to the blackboard. The first time, girls especially will say, 'I have never been to the blackboard.' I say, ‘Come with me, don't worry; help me.'”

Students in the TIDE program also visited each other’s campuses to meet their student counterparts and the instructors face-to-face. One of the Kyoto students commented, “At first, I had to translate everything to Japanese; now I can think in English.”

Ashour-Abdalla founded and became the director of UCLA’s Center for Digital Innovation in 1999. One of the main achievements of the center was the development of interactive educational software using multimedia and computer simulations. During her 12-year tenure, the center produced a rich variety of CDROM- and web-based courses and programs, from CDs that made physics and chemistry more interesting and understandable to a preparation course for the California High School Exit Exam.

She also founded the UCLA Space Plasma Simulation Group, which was one of the first groups in the country dedicated to using plasma physics simulations for magnetospheric physics in close coordination with spacecraft data. She was principal investigator or co-investigator on a number of NASA missions, most recently for NASA’s Magnetospheric Multiscale mission, a four spacecraft mission launched in 2015 to study the physics of magnetic reconnection, a critical problem in solar and space physics.

Her numerous honors included election as a fellow of both the American Physical Society (1986) and the American Geophysical Union (1993) and receiving the UCLA Woman of Science Award (1986), the Department of the Army Outstanding Civilian Service Medal (2004) and the European Space Agency award for her outstanding contribution to Cluster’s exploration of Geospace (2005). She served on advisory panels for the National Academy of Sciences, National Science Foundation and NASA.

Ashour-Abdalla  is survived by her husband, Dr. Mohamed Abdalla, and her daughter, Kenz Abdalla.

In accordance with her wishes, she will be buried in Egypt with her family. A public memorial service will be held in tribute of her many accomplishments. In lieu of sending flowers, a scholarship fund in her name will be established. Further information will be announced on the UCLA Physics and Astronomy website.