Photographer Janna Ireland is known for portraits of family and friends that explore domesticity and Black life. But she has devoted the last four years to driving the streets of Los Angeles, seeking out some of the more than 3,000 projects designed by barrier-breaking Los Angeles architect Paul Revere Williams.

The result: her critically praised collection of photographs “Regarding Paul R. Williams: A Photographer’s View” (Angel City Press). The book features 280 of Ireland’s black-and-white images that evoke moody interiors and exterior landscapes, with long shadows stretching over curving staircases and archways, showing the architect’s mastery of proportion and composition and his lasting impact on Los Angeles.

“This person, who was absolutely brilliant by the standards of any time, was doing all of this work in the middle of the 20th century. And while he got a great deal of recognition for it during his lifetime, it wasn’t enough, and people don’t know his name,” said Ireland, a UCLA alumna who graduated in 2013.

Ireland’s journey with Williams’ work started in 2016. Barbara Bestor, an architect who runs the Julius Shulman Institute at Woodbury University, wanted to put together a show of Williams’ work at Woodbury’s gallery. James Welling, a professor of Ireland’s and the former head of the photography area in the UCLA Department of Art, recommended that Bestor offer the project to Ireland.

“I had probably heard his name once or twice,” Ireland said. “So, the project has always been a research project, in addition to the project of actually making the photographs.”

At the time Ireland was working full-time at USC during the day, teaching at Pasadena City College in the evenings, and raising two children. That left the weekends to gather photographs.

“I had been thinking, maybe I will work in an office doing administrative work for the rest of my life. And if that happens, that’s fine, I can make my art in my own time. But the project grew so much bigger than that,” she said.

UCLA Arts · Turning the lens to the architecture of Paul R. Williams

Born in Los Angeles in 1894, Williams was orphaned at age four but excelled in school, landing internships and jobs at prominent architecture firms. Despite the racial prejudice of the time, he became a licensed architect and opened his own practice in 1923. He made history as the first Black member (and later, Fellow) of the American Institute of Architects, or AIA, and in 2017 Williams was posthumously awarded the institute’s gold medal, America’s highest honor for an architect. He was the first Black architect to receive the distinction.

In a career spanning six decades, Williams designed more than 3,000 structures, ranging from mansions for Hollywood celebrities, public housing projects, banks, churches, hotels, and more. Williams didn’t have a signature architectural style, unlike many of his contemporaries.

“They were making homes that were designed to be immediately recognizable [as their work],” Ireland said. “Paul Revere Williams didn’t have the same luxury. And actually, what made his career possible was his ability to work in many, many different styles. So, there are signatures, there are touches that repeat, but the thing that made him special and made him successful was this ability to shift styles for different clients.”

As she continued her work, Ireland began to feel a kinship with Williams. Like him, she experienced discrimination growing up. Ireland attended a creative and performing arts high school in Philadelphia.

“I had one teacher who told me, when I told him that I was planning to apply to NYU to study photography, that people from humble beginnings have no place at a school like NYU. And I still don’t quite know how to interpret that statement,” she said. “But it was very discouraging and I almost didn’t apply.”

Ireland did get into NYU, but that experience and the feeling of being an outsider stuck with her.

“It was a major financial decision for me, and the repercussions of that decision have continued to this day. I’m still paying off my NYU loans. I was studying with students who had freedoms that I didn’t, who could spend money on equipment, who could intern whenever they wanted to, because they weren’t working 20 hours a week as a work-study student like I was. I had to get past some of those things or figure out ways to work some of those things into the photographs that I was making.” 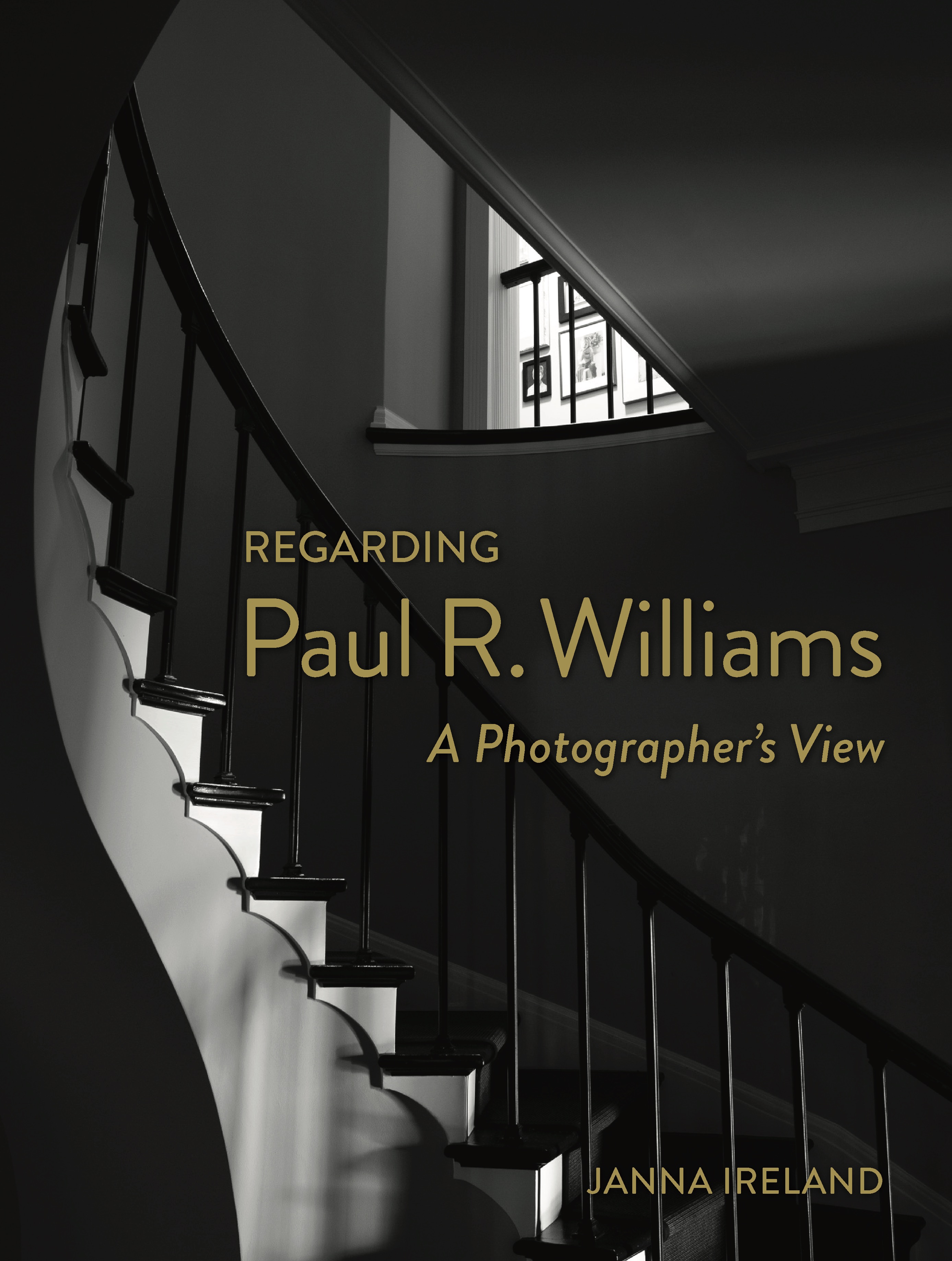 Once Ireland was tapped to photograph Williams’ work, she had to figure out how to avoid taking typical architectural photographs.

“I didn’t want to make photographs that were about showing spaces that were for sale, or were about furniture or about design. I wanted to photograph them in a way that really concentrated on the architecture itself, and the way that I chose to do that is to really look at small parts of particular rooms and how rooms fit together, versus how everything looks together.”

Rather than use artificial lighting, which is typical for shooting architectural interiors, Ireland relied on natural light from windows.

“I wanted to concentrate on the way these structures actually look and the way people actually experience them,” she said.

The images linger on the voluptuous curves of a staircase, the classical columns of a mortuary chapel, the shafts of sunlight through a window, or the delicate details in decorative crown molding. They highlight the mixing of revivalist styles and use of modern materials like concrete that typify his work.

“The thing that is consistent is the level of detail, the level of care. So, it’s not particular architectural details. It is a particular hand putting it all together that’s consistent. It’s the thoughtful way in which these places were designed. That is where I see him,” she said.

Other photographs in the book are not of buildings, but actually of dirt lots where Williams’ buildings used to be. They speak to the ephemeral nature of architecture, especially in Los Angeles, where many exceptional buildings have been torn down.

Since the book’s release, Ireland has received editorial commissions from leading publications. But she’s not done with Williams yet. She has continued to photograph his buildings since the book’s publication in September 2020. She’s also looking forward to exploring a trove of drawings and other archival materials that have been jointly acquired by the University of Southern California School of Architecture and Getty Research Institute.

“It’s sitting in tubes waiting for the pandemic to be over so that people can begin accessing the materials and figuring out what is in this archive,” she said.

While Williams was a trailblazer as a Black architect, Ireland is concerned that his stature tends to overshadow his architectural accomplishments.

“I do worry that always discussing him as a Black architect is setting him aside and making it harder to fully appreciate what he did. I want him to be able to be compared to his contemporaries without that asterisk,” she said.

Ireland said she thinks the Black Lives Matter movement has increased the public’s interest in Williams and in Black historic figures, and in telling stories of Black excellence.

“While he got a great deal of recognition for it during his lifetime, it wasn’t enough, and people don’t know his name,” she said. “People who should know his work, don’t know his work. And if this time can do things for his reputation and for making this work known to other people, I’m very happy about that, and happy to be a part of it.”