L.A.’s only species of newt is showing signs of severe distress, troubling researchers and raising questions about the impacts of the drought and climate change.

In the southern part of the state, the California newt—Taricha torosa — has been showing up at breeding grounds nearly 20 percent underweight on average. The drastic change has UCLA evolutionary biologist Gary Bucciarelli concerned.

“They look really emaciated,” said Bucciarelli, a postdoctoral researcher with UCLA Institute of the Environment and Sustainability. “You can see the vertebrae and ribs of individuals. They don’t look like they are in healthy breeding condition.”

Bucciarelli, who has studied the species since 2010, believes the problem is related to dry, hot weather from the drought and climate change, although more information is needed to determine an exact cause. 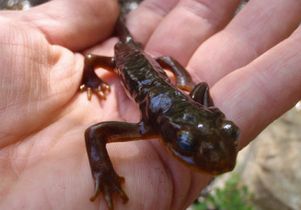 UCLA
The species is highly poisonous, containing the same neurotoxin as pufferfish.

“I’ve studied these newts across California, from San Diego to Mendocino County,” he said. “You see a very different picture when you look up north. They’re not showing these signs of lack of nourishment or whatever may be happening.”

California newts spend most of the year on land, staying underground to keep cool and moist—a must for amphibians. From January to May, they emerge to breed in streams. However, if there isn’t enough rain, they might not come out at all.

The species is highly poisonous, containing the same neurotoxin as pufferfish, yet it is not clear how newts get their toxin. If consumed, it is deadly to humans and other creatures—causing numbness, vomiting, decreased blood pressure and paralysis. However, a garter snake that preys on the newt has apparently evolved tolerance to the toxin. And, while evolution is typically a slow process, some researchers argue that toxicity and resistance are co-evolving, said Bucciarelli, whose research has drawn attention to this possibility.

A toxic arms race with a snake would top the list of most species’ concerns, but amphibians are highly susceptible to human impacts. Because they spend time on land and in water, changes to either environment affect them. This vulnerability came to global attention in the early 21st century when a climate-linked pathogenic fungus killed large numbers of Central and South American amphibians.

“At that time, they really became the canary in the coal mine for climate change,” Bucciarelli said.

Researchers believe individual California newts can live up to 30 or 40 years, which is a long time for an amphibian. That makes the species useful in determining how changes in climate might affect other wildlife.

Bucciarelli laughs when other researchers tell him about the difficulty of the fieldwork they do. “Birds fly. They’re hard to find. You’ve got to trap them.” The newt, on the other hand, returns to same breeding locations year after year. They don’t even swim away. “They’re quite inquisitive. They don’t mind coming to the water surface to see what’s going on.” Bucciarelli catches them by hand to take measurements and tissue samples — one for DNA and another for toxicity. He also assesses their general breeding characteristics. In just five days, he can sample 30 breeding localities from L.A. to Mendocino.

Laura Patterson is the statewide amphibian and reptile coordinator for California Department of Fish and Wildlife, which monitors the effects of the drought on wildlife. Not surprisingly, species that rely on marshes, creeks and other freshwater places are the most at risk. The agency helps create recovery plans for endangered and threatened species. It also focuses on protecting species — like the newt — that have not yet reached critical status.

“It can be a monumental effort to improve species to a point where they no longer need protection,” Patterson said. “It’s a lot cheaper to be proactive and protect habitat ahead of time.”

That’s where research from Bucciarelli and other scientists comes in. They partner with local, state and federal agencies to fill gaps in knowledge, enabling conservation authorities to create more effective plans. As Southern California moves further into the drought, Bucciarelli plans to keep working with land management agencies to improve protection for amphibians in the L.A. area.

This story was taken from the UCLA Institute of the Environment and Sustainability website.