More than 2,000 people gathered in Dickson Court on the UCLA campus on Friday, May 12, to celebrate UCLA School of Law's 66th commencement, the first of a series of 2017 ceremoniees taking place in May and June. 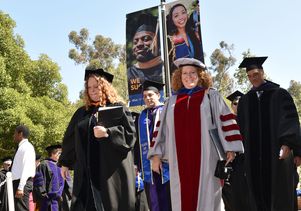 Dean Jennifer Mnookin and other UCLA School of Law leaders head up a procession of graduates.

Judge Paul Watford of the U.S. Court of Appeals for the Ninth Circuit, who graduated from the UCLA School of Law in 1994, delivered the commencement address.

“We live in very polarized times right now, where more and more people seem to be locked into their own narrow view of the world,” Watford told graduates and their guests. “By virtue of the training that you have received in law school, you have the skills necessary to combat this trend of polarization. … You have the capacity to facilitate constructive dialogue among parties who may strongly disagree with one another, and perhaps in the process help them to see that they share common ground.”

Jennifer Mnookin, UCLA Law's dean and the David G. Price and Dallas P. Price Professor of Law,  expressed pride in the accomplishments of the Class of 2017 and cited John Adams in emphasizing the importance of the rule of law, especially in times of unrest. As an example, she cited the voluntary efforts of nearly 200 law students who raced to LAX immediately after President Trump’s first travel ban to assist lawyers representing detained travelers.

“You will always remember at this point in time — when current events and the social, political and legal realms collided and created enormous upheaval, domestically and beyond — that you were here, in law school, at UCLA,” she said. “You have learned that mysterious but critical skill of thinking like a lawyer, and I hope that in some part of your professional life, you will, as John Adams asked of all of us, use it to redress wrong and advance right, however you understand those terms.”

Several of the ceremony’s student speakers came from immigrant families or were immigrants themselves. President of the Class of 2017, Carlos Almendarez, the son of an immigrant who worked as a housekeeper at the Beverly Hills Hotel, told his classmates to “continue fighting the good fight.” And Anika Amin delivered a speech on behalf of her fellow J.D. graduates and spoke of her parents who immigrated to the United States from Bangladesh.

For details on all UCLA commencement celebrations, including tweets from graduates, go here. 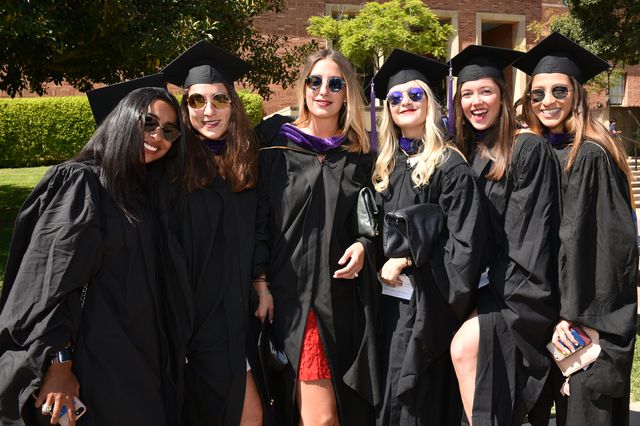