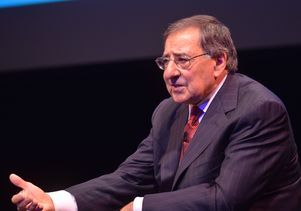 “I’m proud to honor the life and work of Danny Pearl,” said Panetta of the Wall Street Journal reporter, who was kidnapped and killed by terrorists in Pakistan in 2002. “Our enemy is driven by fanatics with fanatical beliefs … who have no regard for the sanctity of life.”

He said journalists like Pearl have the courage to report the truth, which is “so often the first victim of war.”

The annual Daniel Pearl Memorial Lecture honors Pearl and his work. His father, UCLA emeritus computer science professor Judea Pearl, and his family launched the Daniel Pearl Foundation and established the lecture series at UCLA in 2002.

Asked by Newton why he wanted to write a memoir, Panetta said he wanted to share his experiences of getting things done in Washington, D.C., where progress is at a standstill.  “I see a Washington that’s dysfunctional and in gridlock. It doesn’t work together, doesn’t want to face the major, important issues facing this country.”

Panetta said Washington needs governing. “In 50 years I never saw Washington as bad as it is now. There are no rules anymore; 47 senators decide to write to our enemy (Iran). Governing is not a pretty-please process. It’s essentially a kick-ass process. You have to fight for every vote. You have to roll up your sleeves and engage.”

Part of the Luskin Lecture Series, the event was sponsored by the UCLA Luskin School of Public Affairs, the UCLA Burkle Center for International Relations, the Daniel Pearl Foundation and the Yitzhak Rabin Hillel Center for Jewish Life at UCLA.

You can find a story summarizing the lecture as well as a podcast on the UCLA International Institute website.