Isabella Granados recalled crying a lot when her mother dropped her off at the bus that would take her to UniCamp, a summer camp for underprivileged children that’s run by UCLA students.

“It was my first time going to camp, and I really didn’t want to go,” said Granados, who is Mexican American and grew up in East L.A.

But the experience proved to be life-changing for Granados, who met UCLA students working as counselors at UniCamp, an independently funded nonprofit organization that links UCLA with the community. They motivated her to apply to UCLA and advised her on what she needed to do to get there.

“I asked the campus counselors a bunch of questions and learned a lot from them,” she said. “After UniCamp, I started to pay more attention to my schoolwork.”

This fall, Granados will enroll at UCLA as a fine arts major, making her the first in her family to attend college. She will return to UniCamp this summer to work in the kitchen, and, next summer, plans to serve as a camp counselor.

Granados is part of a select group of 20 UniCamp counselors and staff members who dub themselves the “League of Extraordinary Campers,” former campers who come back to the program as UCLA students fueled by the enthusiasm they first caught as youngsters. 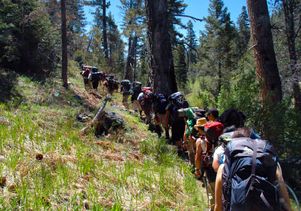 UCLA UniCamp
For the campers, UCLA UniCamp is the first they get to do outdoor activities like hiking.

Although the focus of UniCamp is to provide students with a positive camp experience — the first such adventure for the majority of campers who come from urban settings — there’s also another hope: that the campers end up believing in themselves and seeing college — particularly UCLA — as a viable destination.

Cardenas enjoyed his UniCamp experience so much that, after enrolling in UCLA, he returned to the camp as a student counselor, then head counselor and finally camp board chairman. Many years later after graduating from UCLA School of Law, he returned to visit the camp with his wife, children and grandchildren.

“He shared many stories with us about how much he enjoyed camping for the first time and how the camp really got him thinking about going to college,” Wirick said.

Since 1934, the camp in the San Bernardino Mountains has provided Los Angeles-area children with a weeklong outdoor experience they might not otherwise have. This year, nearly 1,400 low-income children from Los Angeles County between the ages of 10 and 18 will attend the camp, which will be staffed by 480 UCLA students. Because emergency repairs had to be made to the camp’s water tower, the first camp session begins later than usual this year, on July 20.

Nestled in the pine trees next to a river, the camp exposes children to traditional camping activities that seem far out of sync with today’s world of iPads and video games. Campers sleep in open-air cabins, sing songs, play games, swim, hike, ride mountain bikes and enjoy the camaraderie of sitting by a campfire. There is also an overnight hiking trip to the area’s highest peak, Mount San Gorgonio.

This year as a pilot, UniCamp, in partnership with UCLA’s Institute of the Environment and Sustainability, will offer an environmental camp in August to fourth, fifth and sixth graders from the UCLA Community School.

UCLA students apply to become camp counselors. They raise money throughout the year to help pay for camp expenses, particularly costs associated with sending a camper to UniCamp. (Campers are asked to pay $100 to ensure their commitment to attending camp. But campers are also helped out financially if their families can’t afford the fee.)

Granados said she tried many activities at the camp that she had never tried before, including archery, fishing and rock climbing.

“I love the people at camp,” Granados said. “When you go to camp, you don’t know anybody, but you automatically hit it off with them because you’re all in the same boat.”