Nicholas von Sternberg was a first-year UCLA graduate film student when, at the age of 21, he became the unlikely director of photography on “Dolemite,” a scrappy blaxploitation film released in 1975 that aimed to have it all — plenty of profanity, sex, drugs, crime and kung-fu-style action, in keeping with the genre that emerged only a few years before with the 1971 film “Sweet Sweetback’s Baadasssss Song.”

Made on a shoestring budget of $70,000, the film went on to make $10 million, appealing to a young, African American audience eager to see themselves represented on screen in a different way.

Now 68 years old, von Sternberg, who went on to shoot more than 50 films, TV shows and commercials as a director of photography in his 27-year career, is a supporting character (played by Kodi Smit-McPhee) in the new Netflix film “Dolemite Is My Name.” In the film, Eddie Murphy portrays singer-comedian Rudy Ray Moore, whose stage persona was a loudly dressed, over-the-top pimp with a fondness for explicit rhymes. The film received two Golden Globe nominations today in the categories of Best Motion Picture — Musical or Comedy and Best Performance by an Actor in a Motion Picture — Musical or Comedy (Eddie Murphy).

Dubbed the “Godfather of rap,” Moore entertained black audiences in Los Angeles in the late 1960s and early 1970s before setting his sights on cinematic fame; when studios turned him down, he decided to make his own film. “Dolemite Is My Name,” directed by Craig Brewer, chronicles the wacky production that ensued.

Von Sternberg, who would go on to serve as director of photography on movies like Peter Bogdanovich’s “Texasville” and such TV series as “Air America” and “Mike Hammer: Private Eye,” is the son of Academy Award-nominated Austrian-American filmmaker Josef von Sternberg (“Shanghai Express,” “Morocco”). The elder von Sternberg also taught at UCLA and among his students were Jim Morrison and Ray Manzarek of The Doors.

“Von Sternberg’s vision of sophistication and the darker side of the human condition was perhaps the single greatest influence on the music of The Doors,” Manzarek told UCLA Magazine in 2009.

While Nicholas von Sternberg was at UCLA he planned to become a director and it was during that time that he was tapped by “Dolemite” writer and co-star Jerry Jones to be the film’s production manager for $250 a week.

He quickly realized that he was one of the few individuals working on the project who actually had any formal training: Moore and the cohorts he enlisted to work on the film were flying by the seat of their pants without permits or any real organization. There wasn’t even craft service for the cast and crew.

“Rudy would cook spaghetti for us or whatever they could get,” von Sternberg recalled.

Recognizing the experience vacuum, von Sternberg created a script breakdown board and the tight $70,000 budget to which the ragtag team would have to adhere. He also gave himself a new job title: cinematographer.

“I didn’t really trust anyone else to shoot it,” said von Sternberg, who graduated from UCLA with his bachelor’s degree in film in 1973. “I’d shot quite a few films at UCLA and I knew I could pull it off … I hired the crew, too.”

The way von Sternberg tells it, the four-week shoot was chaotic, to say the least. He recalls renting a Mitchell BNCR, a nearly 300-pound camera that required four men to move it, and setting it up for filming at the rundown Dunbar Hotel in central L.A., where much of “Dolemite” was filmed.

“The camera was so heavy, that when we set it on sticks, it sank a couple of inches into the floor and we had to keep leveling it,” he said. 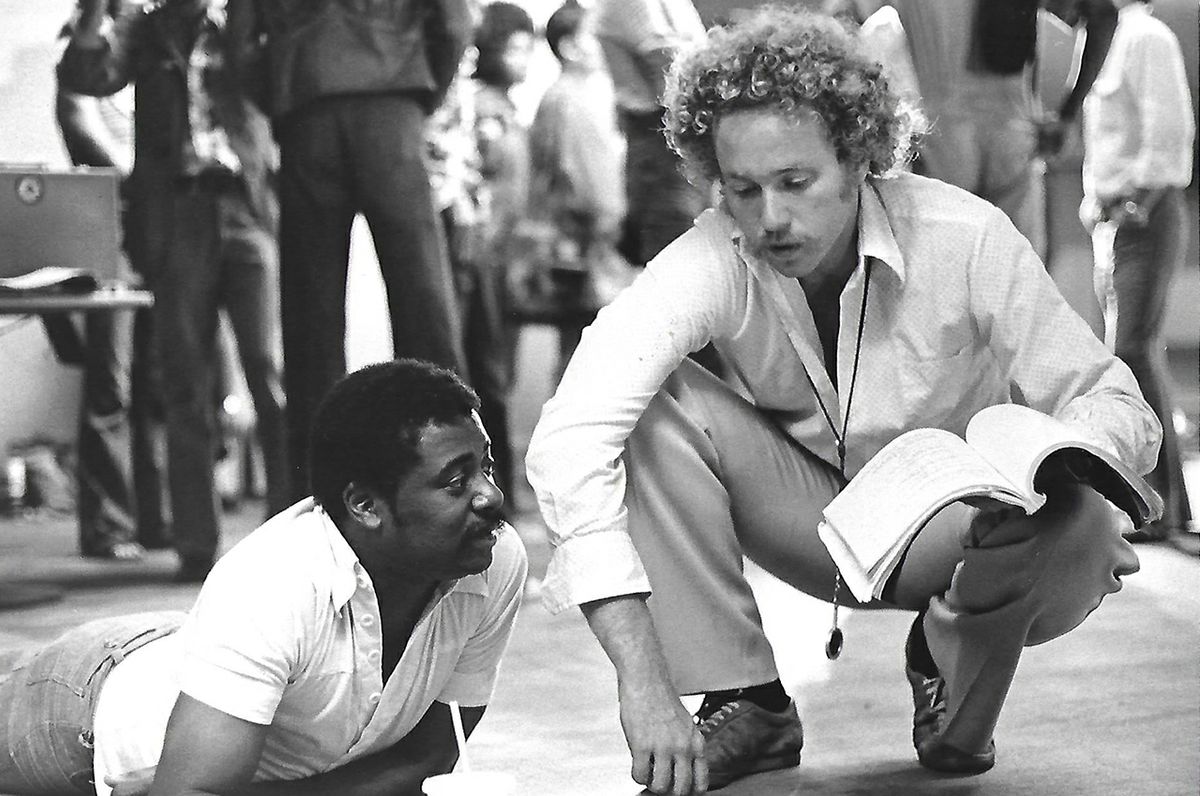 The shoot was also consistently hilarious. On more than one occasion von Sternberg laughed out loud during filming; fellow crew members resorted to putting a sound blanket over him to prevent him from being recorded.

“The whole thing was crazy,” he said.

“Dolemite” was von Sternberg’s first professional gig and though he had never before seen a film like the one he was working on, he became savvy and subsequently worked with Moore on two other films, “The Human Tornado” (1976) and “Petey Wheatstraw” (1977). They were experiences that helped change the course of his career.

Growing up, von Sternberg didn’t have conversations with his famous father about film. In fact, “My dad wanted me to be a scientist,” he said, though the elder von Sternberg taught his son how to use a Weston light meter and Leica camera.

Even so, when he was 12, von Sternberg worked as an assistant on the set of a Hungarian documentary about expatriate Europeans in Hollywood — his father was one of the subjects — with Academy Award-winning cinematographer Vilmos Zsigmond, who was a cameraman at the time.

Von Sternberg started college at UC Davis but transferred after the first quarter.

“I took a basic film production class at Davis and the professor encouraged me to come down to UCLA,” he said. “That’s really when I started to have the idea that I could be involved in films.”

He took a class taught by his favorite professor, film preservationist Ralph Sargent, in which students created a short film using the script of the 1970 film “How Awful About Allan.”

“We each had a week to prepare the production,” von Sternberg said. “Mike Riva, who became a production designer for Steven Spielberg was in that class; Lowell Peterson was in there, too.” Riva worked with Spielberg on “The Color Purple”; Lowell’s director of photography credits include “Desperate Housewives” and “Jane the Virgin.”

Von Sternberg met Oscar-winning cameraman Hal Mohr through Mohr’s wife, Evelyn, who was a professor of Latin at UCLA, and started building sets with him at their home.

“I learned to respect the work of the cameramen,” von Sternberg said. Along the way, he discovered that he had a good eye, and was interested in the lighting and equipment. “I was very mechanical so it really appealed to me to work as a [director of photography].”

He walked away from the cinematographer’s life in 2000. “I was almost 50, working in Canada a lot and it was getting hard to be up on my feet all night,” he said. Von Sternberg became a special education teacher, which he finds fulfilling, and hasn’t looked back. He is, however, nearly halfway through a script he’s writing about his father and his working relationship with Marlene Dietrich on the set of “The Blue Angel,” the first German talkie.

“Two years after [Blue Angel star] Emil Jannings said my father was the last person he would ever work with, he said that he had to direct ‘The Blue Angel,’” he says. “They didn’t get along but he respected him tremendously.”