When Judith Holland decided to take a job offer from UCLA to become its first full-time director of women’s intercollegiate sports in 1975, her friends told her she was making a big mistake.

After all, she wasn’t UCLA’s top pick for the job. That person had suddenly quit shortly after being hired.

“But I didn’t let my ego get in the way,” Holland said, looking back at her decision to join UCLA. “To me, UCLA was the epitome of Title IX,” the landmark federal civil rights law passed in 1972 that bans discrimination on the basis of sex in any education program or activity that is federally funded.

“UCLA was trying to do everything possible to make its women’s sports program as good as the men’s,” Holland said. “And that wasn’t true for very many places around the country. So this was something I really wanted to do, and UCLA was the school I thought I could do it in.”

Title IX’s impact, however, transcends athletic achievements and team championships and euphoric people-pile celebrations on the courts and fields. UCLA’s creation of a thriving women’s athletics program changed campus life, the school’s national reputation and most importantly, the lives of thousands of student-athletes and all the children who have looked up to them.

Some of those young kids who found their role models are, in fact, children of the original generation of Title IX pioneers. Current soccer player Kaiya McCullough’s mother, Amy Thorne, was a gymnast at UCLA.

“She became All-American and got the first perfect 10 while still being a walk on,” said McCullough, whose father, Abdul McCullough, was a captain of the UCLA football team. “Her legacy is only something I can only hope to live up [to]. If I can be half the woman she is when I’m older, then I did something right in my life.”

The genesis of women’s sports

Across the country, women’s sports grew up in the shadow cast by male athletes. This was also true at the Southern Branch of the University of California, a former teacher training institution that would evolve into UCLA. Football tryouts were announced on the very first day of classes in 1919, and nearly 100 male students showed up.

But because the Southern Branch had an abundance of aspiring teachers — female students outnumbered the men by a ratio of six to one — there were opportunities for women to play sports. The Women’s Athletic Association was created on campus in 1919; women participated in four sports: basketball, baseball, tennis and track.

Sports became even more popular among women with the founding of UCLA’s intramural athletics program in 1923-24. Among the intramural sports in those early days that drew both women and men were swimming, indoor baseball, track and tennis. 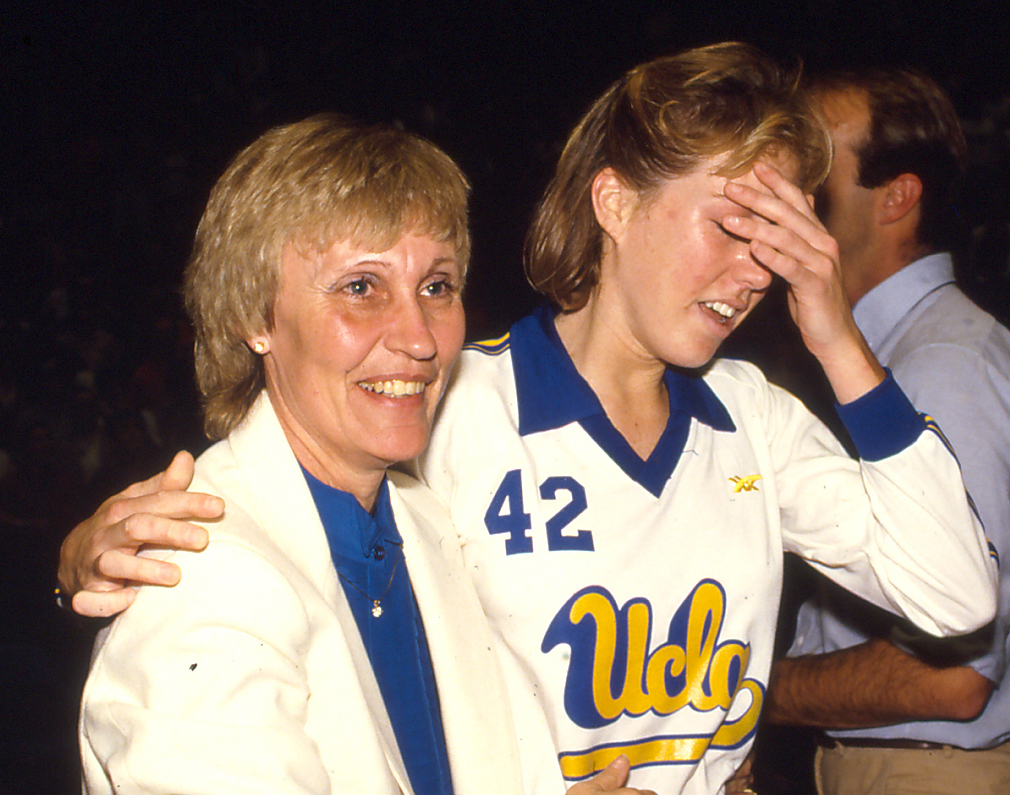 In the decades that followed, however, it was male athletes who would earn all the accolades and attention as intercollegiate athletics became part of the American sports landscape.

It wasn’t until Title IX was enacted by Congress in 1972 that intercollegiate sports for women started their march toward parity with the men’s — and also stirred controversy across the country as resources were shifted and some men’s sports programs were cut, including at UCLA.

Caspar Weinberger, then U.S. secretary of health, education and welfare, which oversaw compliance with Title IX, praised UCLA for being at the forefront of this new movement and urged others to follow its example.

Achieving sports equality at UCLA, however, was still a work in progress.

“Thanks to Title IX, they gave me a full scholarship,” Meyers Drysdale recalled in UCLA Magazine. “Not that there weren’t inequalities on campus. In my freshman year, we played on the junior varsity court, not on the main one like the men, and the women's athletics department was housed in a small green trailer behind the gym. But in the end, I couldn't be more grateful for the opportunity."

Holland had a different view of that green trailer where she and her coaches built the foundations for women’s athletics.

“It was a double-wide,” Holland recalled, chuckling. “The minute I saw it, I loved it, because it was all mine. I had been reporting to men for so long … and here I was going to have a place all to myself and my staff. … It was such a pleasure for me to be at UCLA where I found an open and welcoming environment.” 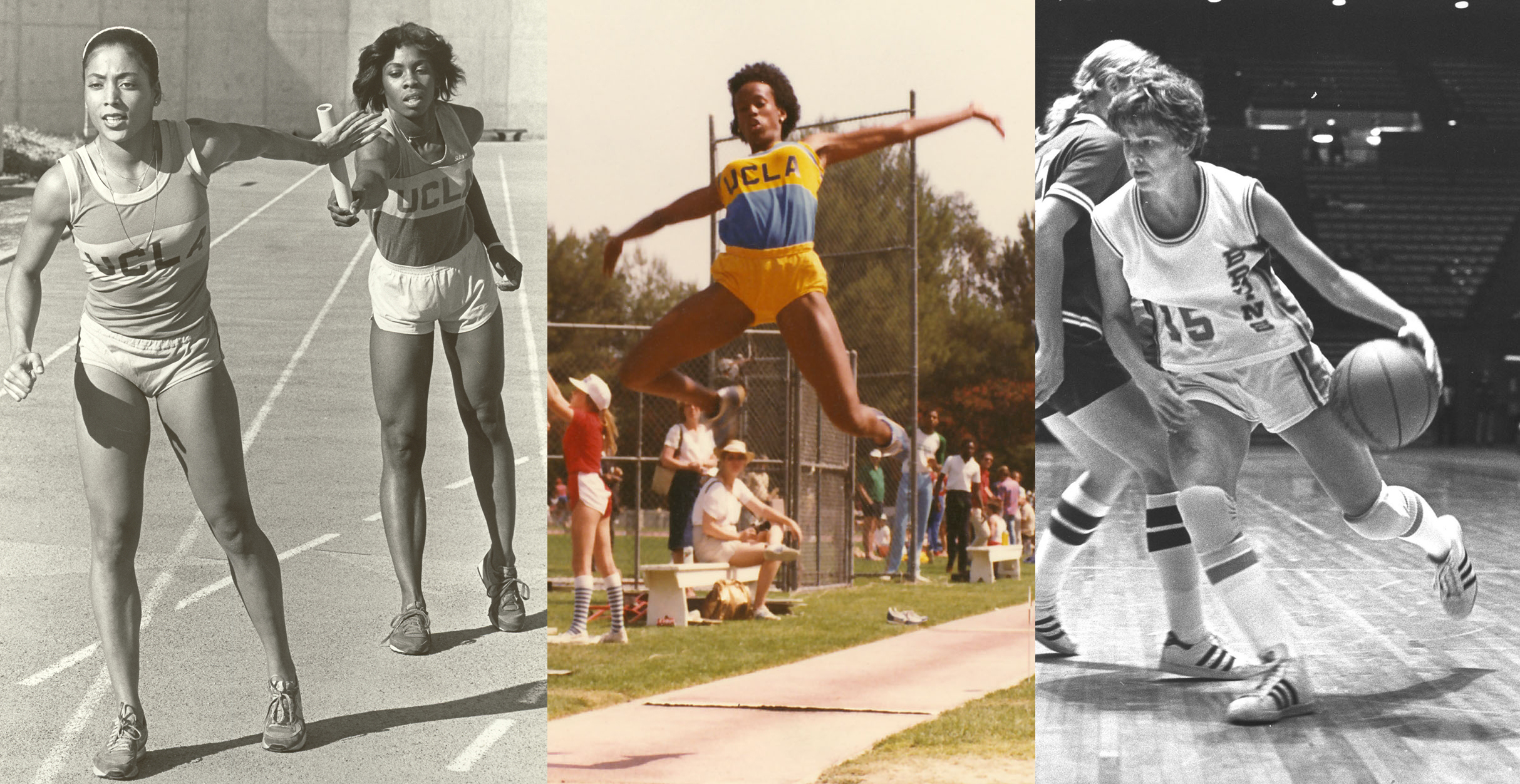 She was soon joined by others who felt a similar calling. While her initial $263,000 budget would only allow her to hire part-time coaches, most of that money went for scholarships.

The reason they came “wasn’t for the salaries,” Holland explained. “A lot of people wanted to coach at UCLA for the prestige of it and to get in on the ground floor. They thought what I thought … that UCLA was serious about doing the right thing and was going to grow this program in the best way possible.”

The administration, she noted, “especially Chancellor Young, wanted to do the right thing. They didn’t just want to give lip service to this, throw a little money at it and hope it would go away.”

Piecing together money out of her limited budget to hire the very best coaches she could find, Holland brought in talented individuals, like Sharron Backus, who led the Bruins softball team to a national championship in 1978.

Also in 1978, women’s basketball coach Billie Moore, another Holland hire, guided her team, featuring stand-outs Meyers, Denise Curry and Anita Ortega, to a national championship when they defeated the University of Maryland at Pauley Pavilion.

Holland also rehired Andy Banachowski, who had been successfully coaching the women’s volleyball team off and on since he graduated in 1968. To his first national championship in 1972, he added three more in 1974, 1975 and 1984.

Among her hires in track and field were Pat Connolly of women’s cross country and Bob Kersee in track and field, a sport later dominated by athletes he trained: Olympic gold medalists Florence Griffith (later Griffith Joyner), Gail Devers and Jackie Joyner (later Joyner-Kersee). UCLA claimed national championships in outdoor track and field in 1982 and 1983. 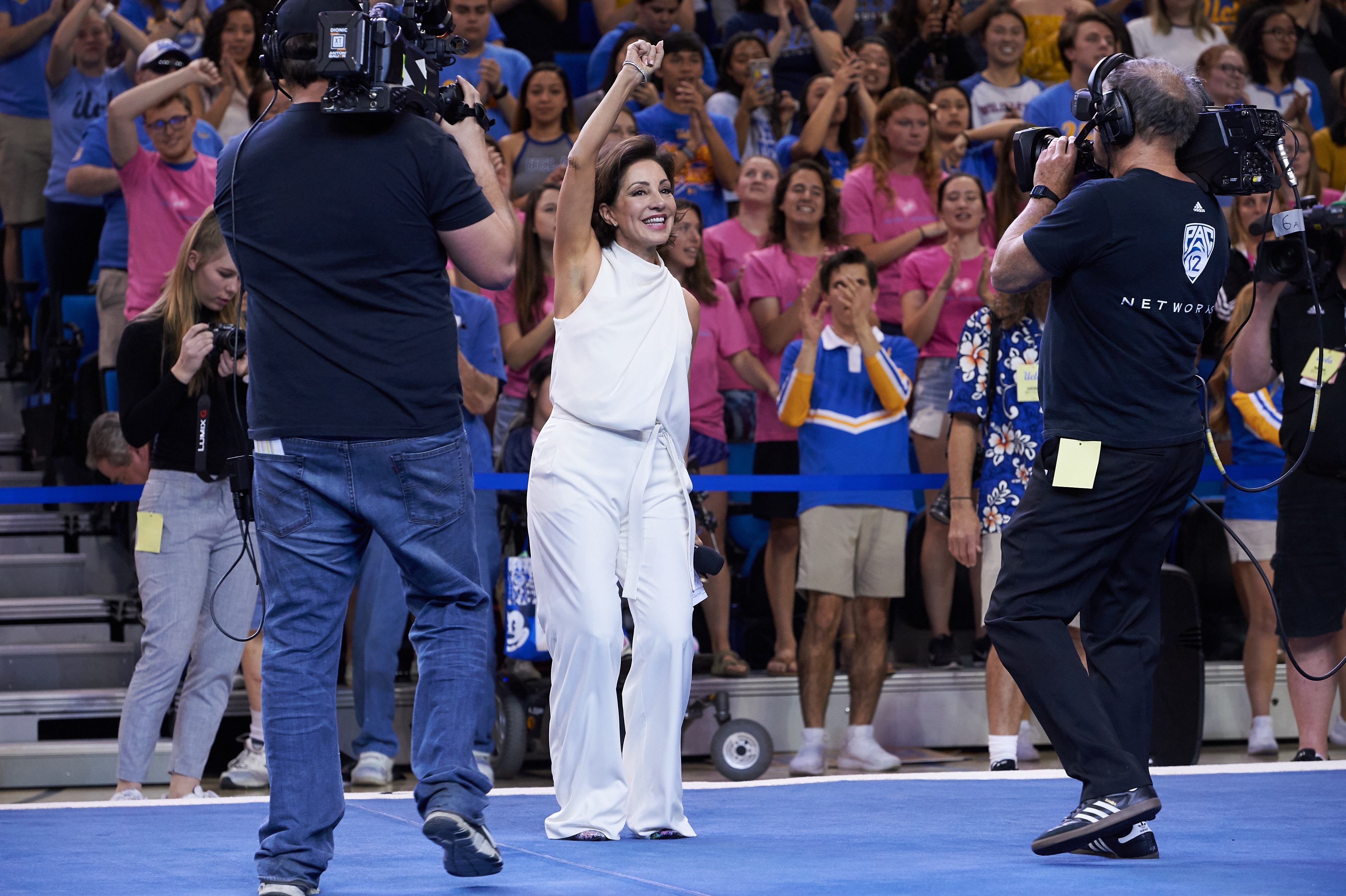 To head UCLA’s gymnastics team, Holland made a highly unusual hire that had many people scratching their heads. “But there was something in her that made me think she could do this. All she needed was support,” Holland recalled.

At the time, Valorie Kondos Field had virtually no experience in competitive gymnastics. “She was considered a ballerina, a dancer,” Holland said, hired to help the gymnasts choreograph and perfect their floor exercises.

Kondos Field retired in April after 29 years with seven NCAA national championships, 19 NCAA regional titles and 14 PAC-12 titles. The gymnasts she trained scored 21 perfect 10s just in 2019, more than double the number accumulated by any other college teams.

Today, UCLA’s intercollegiate sports program boasts 25 teams, 14 of them women’s. Women have won 10 of the last 14 NCAA championships won by Bruins. Since 2005, women have won 17 national titles while men have brought home 7. The latest was claimed by the softball team June 4 when it defeated Oklahoma to secure its 12th NCAA softball national championship and UCLA’s 118th NCAA title overall.

But the legacy these women leave behind is as much about cultural presence as achievement:

And it’s Youtube sensation Katelyn Ohashi, whose jaw-dropping floor exercise (which scored a perfect 10) was seen 41.8 million times last January, making it the most-viewed sports video of 2019 at the time.

A different kind of champion

UCLA’s women athletes have distinguished themselves in other ways — in upholding high academic standards as well as using their platform to advocate for social causes off the field.

In 2017 then-sophomore soccer defender Kaiya McCullough used her standing as a UCLA athlete to protest racial injustice. Seeing yet another video of police shooting an unarmed black man hit McCullough viscerally and compelled her to kneel during the national anthem before games, as did Colin Kaepernick, quarterback for the San Francisco 49ers.

“It was getting to the point where I would see one of these videos every couple of days — weeks — and every single time the emotional response inside me kept getting more powerful,” said, McCullough, whose activism follows a trajectory that traces back to Bruins like Jackie Robinson and Arthur Ashe. 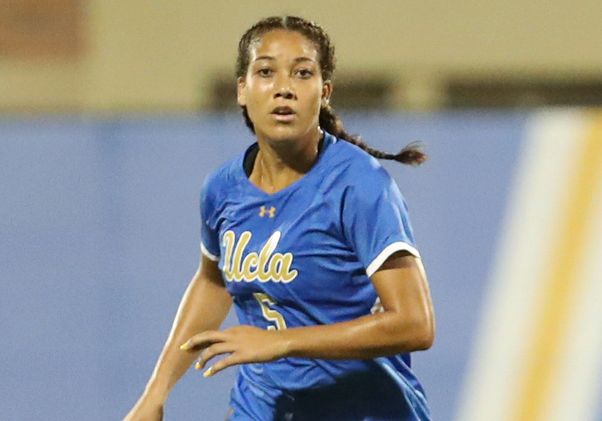 “The UCLA legacy … has a lot of history,” McCullough said. “I’ve seen where those people came from and where they ended up and being able to fulfill a legacy that even comes with an inch of theirs, it’s an incredible feeling.”

Because she was anxious about how her coaches and team might react to her silent protest, McCullough told her coach Amanda Cromwell of her plan to kneel. An open and candid discussion of the issues with her teammates and coaches followed.

“I couldn’t have asked for a better reaction from my coach and teammates,” said McCullough, who has since been joined by several other players.

McCullough, who will be a senior this fall majoring in political science, said she’s inspired by the dialogue her protest has initiated and the support she’s received in 2017 and 2018. “The amount of love and support I felt made me confident and brave enough to continue kneeling.”

Kaiya’s mother, Amy Thorne, said she is incredibly proud of her daughter for staying true to her convictions and “using whatever platform she is given to advocate on behalf of others, and even advocate for herself.”

When the 2019 soccer season begins, McCullough plans to continue to kneel.

“I definitely feel that, as a college athlete, I have a larger responsibility to stand up against injustice,” she said, even if her actions might hurt her chance to play soccer professionally. “It’s important to set a good example any time you are given a platform.”