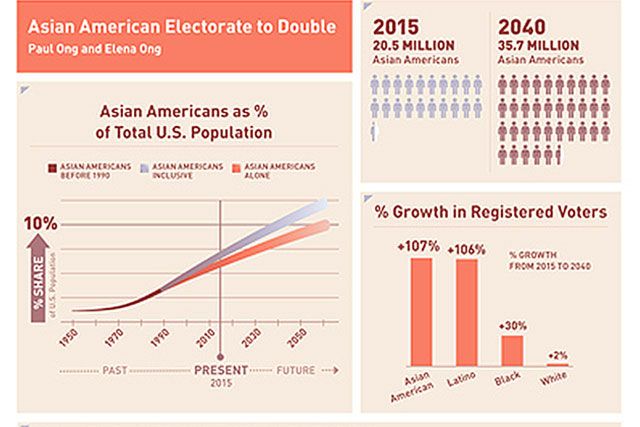 By 2040, there will be more than 6 million additional registered Asian American voters in the United States than there are today, an increase of more than 100 percent and proof that Asian Americans are one of the fastest-growing electorates.

That finding is just one of the results of a new report coauthored by Paul Ong, a UCLA professor of urban planning and public policy with a joint appointment in Asian American studies. The study explores the implications this growing segment of the population has for the U.S. electorate and upcoming political races through detailed demographic estimates.

According to the report, which augmented information from the U.S. Census Bureau, the Asian American electorate will double to 12.2 million in 2040, a 107 percent increase. Due to their growing numbers, the Asian American population will have the potential to play a key role in tight presidential elections and close political decisions. The report is the first in a series of publications that will be released throughout the year and will likely cover a broad range of topics, including culture and multigenerationalism. 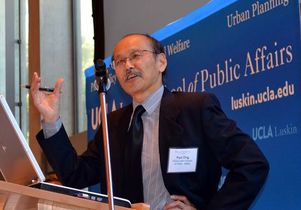 Paul Ong, coauthor of the study

“These results provide a context for understanding the relative size and potential impact of Asian American and Pacific Islanders, as well as the current and future roles of [the population’s] leaders in serving two of the fastest-growing racial populations in America,” said Paul Ong, a professor in the UCLA Luskin School of Public Affairs.

“This study shows that Asian Americans will have a growing presence and stronger voice in our national debates for years to come,” said Sen. Mazie Hirono from Hawaii, the first Asian American woman elected to the U.S. Senate. “I look forward to continuing to work to grow the pipeline of Asian American leaders who will amplify the voice of our community and continue the fight to overcome the challenges we face.”

Rep. Judy Chu, the chairwoman of the Congressional Asian Pacific American Caucus, said that as Asian Americans and Pacific Islanders “become more engaged in the political process, it is important now, more than ever, that our government both represents and responds to the needs of our diverse communities.”

According to the report, the difference in race and age may suggest that the growing population will have different needs, including more emphasis on foreign policy, international relations, trade and immigration, to accommodate the concerns of foreign-born Asian American adults.

In 2015, 44 percent of naturalized Asian American registered voters are over the age of 55, but by 2040, 53 percent will be, according to the study. As a result, the youth and middle-aged share of the political landscape will decline. Older, naturalized Asian American voters are likely to demand different needs, such as native-language registration forms, town halls, e-booklets and ballots in order to vote.

Conversely, authors suggest that populations under 34 are likely to share U.S. values and advocate for issues such as equality, and affordable health care and college costs, among others.

“Given the enormous diversity by age and nativity, along with ethnicity and nationality and socioeconomic class, there is a daunting challenge of creating a common political agenda that unites Asian Americans into an effective and cohesive voting bloc,” the report said.

Though the report focuses on political implications, the impacts of the demographic shifts can be extrapolated into other areas of governance. Among other things, these projections are important for understanding the social, cultural and economic dimensions affecting the development of public policies such as new educational programs, English as a second language programs, and occupational and social programs for Asian American citizens of all ages.

The report, titled “The Future of Asian America in 2040,” is available via the Center for the Study of Inequality, a research center headed up by Paul Ong and housed at the UCLA Luskin School of Public Affairs and the Asian Pacific American Institute for Congressional Studies. Commentaries are also hosted there from elected officials and scholars exploring the dynamics of race and politics in America today.

A version of this story was originally posted on the Luskin School of Public Affairs website.