As a homeless Vietnam veteran in the 1980s, Rick Martinez had to seek shelter nightly — sometimes at UCLA or the grounds of the West Los Angeles Veterans Affairs campus. At one point, to get out of bad weather, he stayed warm and comfortable in the staircase at the top floor of a Holiday Inn alongside the 405 freeway.

“If anyone came, I was just going to say I was looking for the bathroom,” he recalled. “That turned out to be my home for about two months.” 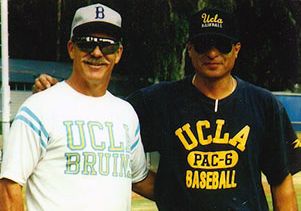 The unpredictable symmetry of life was not lost on Martinez when he found himself decades later back at UCLA, this time as a participant of the UCLA Anderson School of Management’s Entrepreneurship Bootcamp for Veterans with Disabilities that ran July 9-17. And the hotel the program put him up in during the course? The Hotel Angeleno — formerly the Holiday Inn.

Further proof to him of life's mysteries, his room number at the hotel was 1202 — the address of the Antelope Valley house where he grew up before his life was drastically changed by war, post-traumatic stress disorder, homelessness and now redemption through perseverance and an entrepreneurial spirit.

“From homeless veteran to UCLA student on campus at age 65,” Martinez noted Thursday before his graduation from boot camp. “It doesn’t get any better than this.”

Martinez, a man of faith, considered becoming a priest before he enlisted in the Marines in 1968 at age 19. His experiences in Vietnam changed his life forever — watching a boy toss a grenade into a truck that was directly in front of his vehicle; having a friend die in his arms; becoming a “tunnel rat” to clear out the maze of often booby-trapped underground passages; being exposed to Agent Orange.

When Martinez returned from the war, he was not welcomed back with open arms, and he struggled to readjust to civilian life. His first wife left him after they lost their second child in a miscarriage. His second wife left him and took their two kids.

So he withdrew from society, getting out of bed only to shower and eat a bowl of Ramen soup. Finally he was diagnosed with PTSD and was treated at the West Los Angeles VA, but after being discharged, he had no money, food or a place to live.

Many people he ran into, however, didn’t even realize he was homeless.

“I was homeless, but I was one of the best dressed homeless in Los Angeles,” he recalled.

But an unlikely relationship with UCLA began on the VA campus. Martinez started volunteering at the VA, where he received meal tickets that he used to survive. After his volunteer gig, he would walk over to nearby Jackie Robinson Stadium.

One day after watching a UCLA baseball player hit balls off a tee during practice, Martinez asked the player if he could pitch the ball to him.

One pitch led to another. After a number of practices, “I got really close with [now retired] head coach Gary Adams and the baseball team. That was my medicine, and it helped turn my direction,” said Martinez, who wrote about their relationship for Zócalo Public Square. “It helped me see the positive things in life. It was a safe zone. … I found solitude and tranquility at the stadium at night when everyone else went home.”

Martinez eventually pulled himself out of poverty and moved to San Antonio, Texas, nearly two decades ago. Today, he is married and happy, and he was recently invited to serve on the UCLA/VA advisory board for homeless veterans.

He is also a man with a future and a business plan. When he learned about the boot camp, Martinez submitted an application, and, although the program is primarily for post 9/11 veterans, organizers made a rare exception and allowed him to participate.

“The next thing you know, I’m 65 years old, and I’m doing homework,” he said with a chuckle. “I told my wife, this is not easy; these are business management classes.”

The boot camp has helped him refine his business concept and network with his younger fellow veterans, among other benefits.

“They look up to me, and I look up to them too. They are a different breed and mindset than I am, and, thankfully, some of them have even invited me into their companies,” Martinez said.

But he is anxious to start Precision Recycling, an ambitious project to help the Marine Corps Logistics Base in Barstow, among other potential clients, transition to net-zero waste. Over the next year, Martinez and his team want to work with the base to perform about $2.5 million worth of recycling, with assistance from approximately 25 veterans he’d like to hire.

“We have a project that could put veterans to work,” he said. “It’s a beautiful plan. All we need is for them to say, ‘Nice project; now try it.’”

The boot camp, first introduced by the Whitman School of Management at Syracuse University in 2007 and now hosted by a national consortium of 10 universities, is organized at UCLA by Anderson’s Harold and Pauline Price Center for Entrepreneurship and Innovation to help veterans with disabilities develop the skills and tools needed to launch and maintain successful businesses.

The program is offered at no charge to participating veterans, with contributions from foundations, corporations and individual donors covering the cost of travel, lodging, meals and instruction.

“Being in the program — you can’t put a price on it,” Martinez said. “This is one of the most amazing experiences for the business side of me. They’re giving us every tool necessary to hit the target.”

The fact that all this is happening at UCLA, close to the ball field where Martinez pulled his life together, makes it all the better, he added.

“UCLA has a certain spirit of being at the top,” he said. “They only think of the highest achievements. I feel fortunate. I feel blessed to be walking on this campus. But that’s my mentality. If you do something, do it with all of your heart.”

Read Martinez’s essays about his life at Zócalo Public Square.