As a 5-year-old boy who crossed the Mexico-U.S. border illegally into California with his mother and brother, Francisco J. López-Flores grew up living in the shadows to keep his identity as a Mexican national hidden.

Settling the family in Riverside, his mother warned her sons not to let people know where they came from. So although López-Flores spoke Spanish at home and began studying the language officially in the sixth grade, he made sure that he never spoke Spanish in public except in class.

How things have changed for him.

At a ceremony held August 28 at the Biltmore Hotel in Los Angeles, López-Flores, now a fourth-year UCLA student majoring in Chicana and Chicano studies and minoring in society and genetics, stepped proudly into the bright glare of a full media blitz as a person with binational status. He was congratulated by dignitaries from Mexico and California, among them, Mexican President Enrique Peña Nieto, First Lady of Mexico Angelica Rivera de Peña, Gov. Jerry Brown, Los Angeles Mayor Eric Garcetti and Mexican Consul General Carlos Sada. 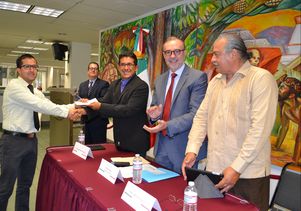 López-Flores receives a check from UCLA associate professor of sociology Rubén Hernández-León. Mexican Consul General Carlos Sada, standing next to the professor, and other consulate officials presided at a press conference at the consulate.

To his complete surprise, he had been nominated for a $1,000 education grant from the Mexican government by the director of the UCLA Center for Mexican Studies, associate professor of sociology Rubén Hernández-León.

Selected as a grant recipient and hailed as a high-achieving representative of the Dream Generation who gained temporary legal status in 2012 under President Obama’s Deferred Action for Childhood Arrivals (DACA) Program, López-Flores shook hands with President Nieto, who presented him with an award certificate.

“It’s an honor and privilege because, to me, it represents a vote of confidence by the Mexican people through their government,” said the UCLA student, reflecting on that moment a week later. “My undocumented status in this country has prevented me from benefiting from many opportunities, and one of those is realizing a binational identity due to restrictions imposed upon me, including the prohibition on travel abroad.”

The awarding of scholarships by the Mexican government was just one of the connections being made with California in the education arena. Under the direction of President Janet Napolitano, UC is also forging closer ties with Mexico. At UCLA, faculty are reaching out to scholars there as well.

The stigma of being undocumented

Despite the lack of opportunities, López-Flores will soon achieve a goal that he has pursued for 12 years. In December, he will graduate from UCLA. He then hopes to earn an M.B.A. in one of the country’s top-10 programs, even though his immigration status precludes him from applying for federally guaranteed loans and numerous scholarships. He’s aiming for a career in health care management.

His track record leaves little doubt that he will succeed.

Growing up in Riverside, López-Flores felt early on the stigma of being undocumented. When voters passed Proposition 187 in 1994 amid rising anti-immigration sentiment in California, his mother kept him and his brother home from school for a while because she feared they would be deported.

After graduating from high school, López-Flores moved to Los Angeles with the intention of attending UCLA.

“I didn’t know how I was going to pay for school, pay for rent or feed myself,” he recounted. He began by scouring the classifieds for rooms for rent, then pitching the idea of exchanging work for rent to potential landlords. He negotiated his first such arrangement with an elderly Jewish couple living on the Westside. “One of the ways I paid for my education when I first came to L.A. was by working odd jobs for different people,” he recalled.

Fortunately, he said, “I was part of the first wave of undocumented students to come to UCLA after the passage of [California] Assembly Bill 540.” That bill made education at both the University of California and California State University affordable for undocumented immigrants, who would otherwise have been required to pay the higher tuition charged to international students.

An awakening through language

During his years at UCLA, López-Flores took two upper-level sociology courses that he particularly enjoyed. One dealt with Latin American politics and the economy, while the other focused on the Mexico-U.S. migration as studied by Mexican scholars since the 1930s.

These course offerings are unique to UCLA’s sociology department, López-Flores explained. While they are not considered Spanish-language courses, they are taught in academic Spanish and use Spanish-language curricula. After having suppressed his Mexican identity and language ability for so many years, he said, “It was refreshing to discover that the language was used for research in so many fields.”

“What is most interesting and rewarding about [these courses],” said UCLA sociologist Hernández-León, “is to see how students like Francisco — heritage Spanish speakers who come from low-income, undocumented immigrant families — discover that the language of their parents and grandparents is also a language in which scientific knowledge is produced.”

This shift of perception, said the professor, “leaves them with a newly found sense of worth of their language, of their heritage and of their culture.”

One of the great contributions that UCLA makes as a public university, continued Hernández-León, is that it shows students of the Dream Generation that “their experience is something the rest of the world should know about; and that we want to study this experience in order to formulate more effective and constructive policies for a more inclusive, diverse and just United States.”

One of the costs of being undocumented, López-Flores emphasized, is the harm it does to people’s sense of self. “It makes you feel that you’re not worthy as a human being,” he explained. “Virtually everyone I’ve talked to who is undocumented has experienced some kind of depression.”

And although he considers himself privileged to have met the DACA criteria and received a work permit and Social Security number, he knows many friends who have not been so lucky.

“The investments that have been made in me by the American public, my community and now the Mexican public through their government will be returned moving forward," he said. "And I am very grateful and humbled by them all.”

Cynthia Lee contributed to this story, which was adapted from one posted on the International Institute’s website. Read the complete story there.