It's been said that if you are doing something you love, you’ll never work a day in your life.

For UCLA graduating senior Luke Vellotti, that’s the plan as he prepares to leave UCLA this week with two bachelor’s degrees — one in mathematics and one in computer science — and start his career at Google as a software developer.

The past four years, he said, have helped him take his interest in math and computer science to new heights and given him a sense of confidence in himself and his abilities.

“When I first arrived, I wasn’t really sure what I was doing,” said Vellotti, who started his freshman year at UCLA when he was just 14. His older brother, Carl, started his freshman year at UCLA at the same time. “I knew that I was interested in computer science and in math, but I didn’t know what I wanted. I’m a lot more confident, a lot more relaxed now. I feel like I know what I’m doing.”

At the time he enrolled, Vellotti was a Stamps Leadership Scholar, a top-ranked chess player in the country under age 15 and a member of the highly competitive United States of America Junior Mathematical Olympiad team.

His first quarter at UCLA was a little intimidating, he recalled, and it took him time to find his way around the 419-acre campus and get accustomed to UCLA culture. Academically, he hit the ground running, he said, and quickly made friends in class and through various extracurricular activities.

Being around older students and fitting in was not an issue, said Vellotti. He had started taking classes with kids who were several grades ahead of him when he was in primary school.

His commitment to his studies and to earning two full degrees in four years required him to take five classes most quarters, compared to three or four classes, which typically constitute a full undergraduate course load at UCLA. Because of the college-prep work he completed while in high school, Vellotti came to UCLA with enough credits for three classes. But that didn’t stop him from charging ahead.

“One quarter in my sophomore year, I took seven classes. Four of them were math classes, which I enjoyed a lot.”

Although it was a lot of work to commit to such a rigorous undergraduate schedule, it was nothing he couldn’t handle, he said.

“People who knew me knew I would be fine.”

Vellotti spent roughly 12 hours per day fulfilling his academic responsibilities, although he always made sure to get an early start on his assignments, never procrastinate, take appropriate breaks throughout the day and avoid pulling all-nighters.

“I had a different college experience, no doubt,” said Vellotti, “but I just really like focusing on school, and I like to learn — and I really like chess — so that’s what I focus on. … When I was 14, I’d taken all the computer science, science and math AP classes I could,” said Vellotti. “If I hadn’t come to UCLA when I did, I would have been really bored.” 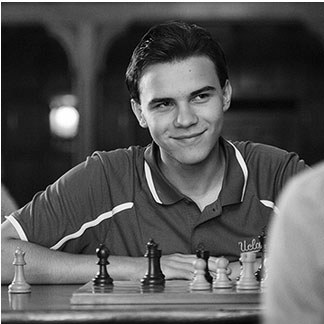 A chess player since preschool, Vellotti also came to UCLA with the goal of creating a community of chess players on campus, something he saw lacking when he arrived from his home in Boise, Idaho. He and his brother, both nationally ranked chess players with a passion for the game, launched the UCLA Chess Club in 2015.

Carl served as president while Luke was the team trainer. Their enthusiasm propelled the club to take its game on the road and compete in tournaments, including the U.S. Amateur Team West, where the club tied for first place in the two years it competed.

In January 2016, Vellotti also started working part-time as a computer engineer at Heal, which he describes as a “doctors-on-demand” service. “You get the app on your phone, and you can get a doctor to come to your home or workplace. A lot of what I did had to do with routing … figuring out which doctors should go to which visit, routing around the doctors between visits and figuring out which paths they should take.”

For the past three years, he’s also been a volunteer math teacher to children through the Los Angeles Math Circle, a weekly enrichment program operated by the UCLA Department of Mathematics for mathematically talented elementary, middle and high school students.

“Luke was a favorite instructor for many of his students,” said Olga Radko, academic administrator at the mathematics department who founded the math circle 10 years ago. “He is very patient and is able to provide detailed explanations for complex problems. Needless to say, he connected even better with the students who are chess players, although all [of the students] are big fans of Luke.”

When Radko met Vellotti for the first time, she said that her initial impressions were that he was mature for his age, respectful and knowledgeable. “He has a very quick mind,” she added.

Vellotti will soon head north to Mountain View, California, to start a job at Google in August. In the fall, he will also start an online master’s computer science program offered at Georgia Tech.

His brother, Carl, will be at UC Berkeley, about 90 minutes away, working toward a master’s degree in bioengineering.

Vellotti also hopes to finally achieve the title of grandmaster, the highest level that can be attained in chess awarded by the World Chess Federation. “I’m very close,” said Vellotti, who is currently an international master. “To become a grandmaster, you need three GM norms. I have two. I think I could get my third one this summer.”

As he prepares to pack up and move to Silicon Valley, Vellotti said UCLA was a great place to spend his teenage years, and he will miss the campus and its people a great deal.

“UCLA is very diverse, and all the people I met and the friends and the connections I made — I don’t know if I’m going to find this again,” he said. “The people here are all very talented and smart, and I think it’s just a really special place. … But I’m not going to miss the traffic.”

For more commencement news and photos, see this.