“The Romance of Gillion de Trazegnies” is a lushly illustrated tale of chivalry and romance. It follows a fictional 15th-century Burgundian knight on his adventures in medieval Egypt and Jerusalem. The prized manuscript was recently acquired by the Getty Museum and is currently on display at the Getty Center.

Stahuljak joined forces with Getty senior curator of manuscripts Elizabeth Morrison to produce a lavish large-scale commercial publication about the manuscript. The resultant book, “The Adventures of Gillion de Trazegnies: Chivalry and Romance in the Medieval East,” explores the manuscript’s cultural, historical and artistic contexts through images, translations and companion essays.

“For me it was really a new challenge,” said Stahuljak, who is a professor in the departments of French and Francophone studies and comparative literature. “It was interesting to write a serious scholarly piece, and at the same time make it as accessible as possible, and in a way that lets the vibrancy of the story and the manuscript’s history shine through. It’s a different kind of writing.”

Stahuljak provided translations for sections of the story that accompany reproductions of all the images from the manuscript as well as one of the two contextual essays.

The fictional story at the heart of Stahuljak’s and Morrison’s new project is essentially part medieval soap opera and part illustrated adventure akin to today’s graphic novels, she explained. Gillion, the western knight in the story, makes a pilgrimage to Jerusalem, becomes imprisoned in Egypt, but eventually rises to command the Sultan’s army. Married to a Christian noblewoman whom he mistakenly believes to have died, Gillion also marries a Muslim princess. The controversial situation of bigamy is resolved when he dies a hero in battle, defending Cairo. His two wives eventually retire to a convent together amicably. 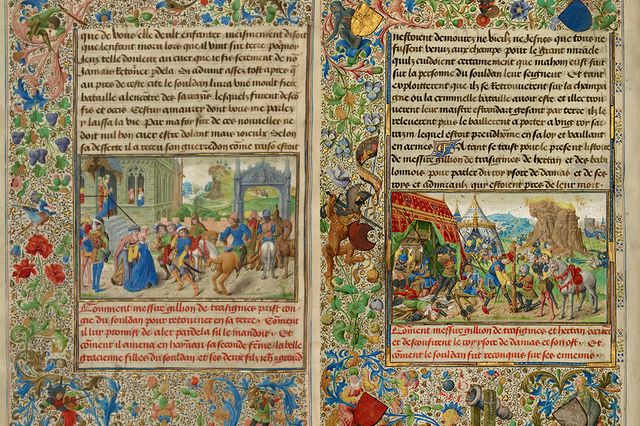 Stahuljak’s essay for the book explores how the fictional story reflects the geopolitics and culture of the time period in which it was written. The story documents the real routes and practices of many people who made pilgrimages to the Holy Land at the time. She also poses questions and theories as to the text’s unknown author, the manuscript’s patron who might have initially commissioned its creation, and traces the manuscript’s ownership through nobles of the court of Burgundy.

Morrison and Stahuljak had fun with the project. They produced an episodic Tumblr post titled “Historical Serial” in which they released parts of the story in short, digestible segments, mimicking the popular podcast “Serial.”

The text was written in Middle French, which sounds different from the French we know today, Stahuljak emphasized. She recorded a reading in the original language for a Getty blog.

The goal was to create multiple points of entry around the renowned work for the public, Morrison and Stahuljak said.

This manuscript in particular, with its intricate and elaborate illustrations by Lieven van Lathem, is an example of the sophistication of the court of Burgundy, Stahuljak said. In its time, such a piece would not only be displayed prominently by its owner, but also be a centerpiece for extravagant dinner gatherings that probably included live readings of the story.

“‘The Romance of Gillion de Trazegnies’ is a significant acquisition for the Getty, and it was important to provide a showcase for it.” Morrison said. “We also have one of the most famous devotional books that Lieven van Lathem ever painted, and now we have what is arguably his most ambitious secular object.”

Both Morrison and Stahuljak greatly enjoyed the collaborative process. Over the course of three years, they were able to meet in person, travel together and come up with a unique presentation that they hope engenders some broad crossover appeal for art lovers and history buffs.

“Scholars will get a lot out of it of course,” Morrison said, “But we are also hoping that the general public will enjoy having it for the images and the fascinating story.”

The manuscript is on display at the Getty as part of the exhibition, “Traversing the Globe through Illuminated Manuscripts,” which runs through June 26.

The book is available for purchase on Amazon and through the Getty bookstore.