UCLA professor Mike Rose of the Graduate School of Education and Information Studies (GSE&IS)  has attained stature as an expert on the cognitive, linguistic, and socio-historical factors that affect engagement with written language, reading and writing by underserved student populations, and the educational histories of non-traditional college students and the barriers and opportunities they encounter.

Recently named a member of the National Academy of Education, Rose was the son of a Los Angeles waitress and the nephew of railroad and auto workers in the Rust Belt of the northeastern United States. He skillfully mined these humble beginnings for his 2004 treatise on the intellectual accomplishments of the American worker, “The Mind at Work,” recently published in a 10th anniversary edition (New York: Penguin Books. 2nd Edition, 2014). The book was lauded by no less than the late Studs Terkel as an “eloquent tribute to our working men and women.” Howard Gardner, author of “Changing Minds,” noted that, “thanks to Mike Rose’s impressive eye, the accomplishments of these workers are now visible.”

Rose discussed the influences that shaped this seminal work in an interview published in GSE&IS news magazine Ampersand.

In a nutshell, what is “The Mind at Work” about?
I want to demonstrate the considerable cognitive demands of blue-collar and service work and what it takes to do such work well. Because of cultural and class biases, the dynamics of occupational status, and our current (understandable) enchantment with high technology, we as a society tend to underestimate and undervalue the smarts involved in such work. This undervaluing contributes to some big problems, I think, in education, in the way work is organized, in job training, and in our civic life as social class divides are exacerbated by our attitudes about work and intelligence.

How did your family’s experience inspire and inform the book?
My mother was a waitress all her working life. My uncles worked in classic Rust Belt industries, rail and auto. I grew up watching and hearing stories about blue-collar work, and that was the work that kept food on our table. So I developed a deep respect for that work, and got to see up close the thought and skills it took to do it well.

As I went through college and then graduate school, I encountered a lot of discussions of intelligence, some of which was pretty demeaning in terms of social class or physical work. I found myself comparing or testing what I heard with what I knew to be true from my experience. “The Mind at Work” is a kind of culmination, I suppose, of that reflection, an attempt to use all the methodological tools I have learned over the years to document the significant cognitive content of blue-collar and service work, and from that documentation to further explore broader issues like intelligence, the nature of work, and education and social class.

What led to a 10th anniversary edition?
Well, for starters, given the tumultuous state of book publishing, a lot of good fortune was involved. I was lucky that my editor believes that the book is as relevant today — maybe moreso — than when it was published in 2004. The topics in the book are certainly in the news today – the nature of work in our time, the skills workers possess, vocational education, and definitions of intelligence. And the whole question of social class is in the news, as we seem to have rediscovered economic inequality.

Though the book is about the cognitive demands of blue-collar and service work, it also addresses broader educational and social issues such as the nature of intelligence itself. What is your concern about the way we define intelligence?
As a country, we seem to be obsessed with intelligence, with measuring it, with boosting our kids’ intelligence via products like Baby Einstein, with getting “smarter” workers into the new “smart” workplace. But the odd thing is that we tend to rely on a fairly narrow way of determining intelligence: we identify it with a score on a standard intelligence test (an I.Q. score) and with the traditional school-based task.

If one does well on an intelligence test, or in school, that clearly indicates some kind of cognitive competence. But if one doesn’t do well — and, historically, poor performers would include low-income, working people — then the meaning of the score is much less clear. To do well tells us something about intelligence — and, usually, schooling — but not to do well provides much less information about intellectual capacity, although that poor performance may speak volumes about educational opportunity.

What struck me as I did the research for “The Mind at Work” was the number of instances of reasoning, of problem-solving and of learning that fell outside of what gets assessed in an intelligence test or the traditional school curriculum. There is the waitress at rush hour prioritizing on the fly a number of demands from customers, the kitchen and the manager. And the plumber diagnosing a problem by feeling with his hands the pipes he can’t see behind an old wall. And the hair stylist figuring out the cut a customer wants through talk and gesture. These kinds of smarts surround us, yet might not be considered when we talk about intelligence. 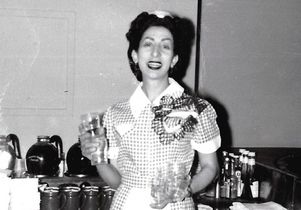 Rose's mother, Rose Meraglio Rose, worked as a waitress at Coffee Dan's in L.A. in the 1950s.

Some of the scenes in your book are from high school or community college vocational courses, and the work the students are doing is pretty impressive. How did vocational education get such a bad reputation?
This is a complicated question, for, in some ways, that bad reputation is deserved. The problem starts with the creation of the large, comprehensive high school at the beginning of the 20th century. The curriculum was divided into tracks: a track for the college-bound, a general track, and a vocational track.

Sadly, the vocational track became the place where many working-class and immigrant children were placed. The philosopher John Dewey referred to the practice as “social predestination.” The vocational track was intended to prepare students for the world of work, but overall didn’t do that very well either. One reason for the poor record was that a number of programs emphasized basic job training and didn’t address the intellectual content of occupations, the kind of content I try to reveal.

A lot has happened with vocational education, which is now called Career and Technical Education, over the past 30 or so years. There has been considerable effort to upgrade the academic content of vocational courses, and the last 10 years or so has seen some real advances, especially with attempts to fuse computer technology into design, mechanics, and manufacturing courses. Health care is another promising area. And in the more traditional trade courses I studied — carpentry, welding, that sort of thing — the instructors emphasized the thinking behind the techniques students were learning.

But I think the huge challenge that faces us is how to undo the vocational-academic divide itself. The divide institutionalized what in some cases is a pretty arbitrary separation of kinds of knowledge and skill. To develop into a good cabinetmaker, for example, you need to know about mathematics, have a historical and aesthetic sensibility about tools and cabinetry and understand things about economics and markets. The ideal occupational program would realize and build on these “academic” subjects within the context of the occupation itself. Dewey called for such an approach a century ago, and some contemporary programs are attempting it now, but such work is difficult, for so many institutional barriers and cultural biases constrain our educational imagination.

Is there any similarity between the skills you document in “The Mind at Work” and the skills it took to write the book itself?
This is a tricky question to answer, for it involves self-analysis that is hard to do and also the application of skills from one domain to a very difficult domain — a thorny issue in educational psychology. But with all those warnings, here goes.

Let me start close to home. I think I picked up from my folks a dogged determination. My mother was indomitable, worked hard as hell. Writing a book, or writing a dissertation, takes persistence, sometimes in the face of big-time ambiguity and uncertainty. I think it was Virginia Woolf who said that the hardest part of writing is putting the seat of your pants onto the seat of the chair.

If I may, let me talk a little bit more about my forebears. My folks had little formal education, but they were terrific storytellers; I grew up hearing tales about the old days and the old country, full of vivid characters, and gestures and sound effects — all that. I think my exposure to those stories influenced my writing. Finally, I was immersed in the lives of immigrant, working-class people, so I absorbed a kind of knowledge — not book-based and not theoretical, but experiential — that I know affects the way I see the world and write about it.

Some of the types of work I observed — carpentry, for example — requires planning, thinking things through, and anticipating problems. A lot of the work — from hair styling to plumbing — also requires an attention to detail and being methodical. Waitressing or working in a shop or factory requires managing the flow of work — hugely important if you want to keep from being overwhelmed and exhausting yourself.

Now let me be clear, these skills develop in particular occupations and are rooted in the knowledge and experience one gains in those occupations. But in a general sense researching and writing a book also requires planning, attending to detail and being methodical, and managing the flow of work.

Let me close by flipping the script and suggesting that some of the skills and qualities we tend to identify only within activities like writing a book are also found — again in a general sense — in the occupations I explore in “The Mind at Work.” The work I observed is laden with mathematics, written language and other symbols. Welding, for example, involves mathematical calculations, symbols for types of welds, instructions, labels, work orders, standards and codes. Words and numbers are embedded in its practice.

And welding, like so many other kinds of work, is also an aesthetic activity. An expert can tell things about the functional quality of a weld by how it looks, but also, to the expert, the look of a weld matters on its own terms as well. In a community college program I observed, students would praise a weld as “pretty” or “beautiful.” “It’s like calligraphy…or signatures,” the instructor told me. “I can show you how to do it, but you develop a style of your own.” So it is with writing a book.