At the end of this academic year, Barbara Drucker, the associate dean for community engagement and arts education, and professor of art in the UCLA School of the Arts and Architecture, will retire after nearly 50 years at UCLA.

Drucker has been a fierce and passionate advocate for students and for teaching as a profession throughout her career at UCLA. Among her many contributions to the institution, her pioneering work in arts education and community engagement stand out. Drucker transformed UCLA’s approach to arts education by developing the Visual and Performing Arts Education program — a unique and innovative schoolwide minor and community engagement initiative — and FORM Academy, a free summer arts program in which high school students from across the city, many from underserved communities, participate in a week-long studio program led by UCLA Arts faculty and recent graduates.

Throughout her career at UCLA, Drucker has unabashedly come to the leadership table as an artist with a unique vision and passion to share with her students, colleagues, collaborators, and community partners. And all during her career as an educator, she has maintained her own artistic practice, exhibiting work nationally and internationally.

This spring, Drucker sat down with UCLA Arts to reflect on her experiences across five decades on campus.

Below is an excerpt from a longer Q&A with Drucker published by UCLA Arts.

You have served in nearly every role possible at the university from student, to lecturer, to professor, to administrator. Not many can make this claim. How did your journey at UCLA begin?

I grew up in West L.A. and Woodland Hills, taking the bus to the beach and to Westwood, to UCLA. I graduated from Taft High School in the San Fernando Valley when I was 16.

I assumed I was going to college. I remember talking to my parents, and asking, “What college do you have money to send me to?” They said, "Well, we don’t have any money. You could go to UCLA."

So, I got into UCLA. I worked as an assistant in the college library to support myself.  I think my father paid my first tuition bill … it was, maybe, $80, but other than that I was independent.

Throughout my K–12 education, I had received encouragement in the arts, and had UCLA-trained art teachers in high school. I remember one of my art teachers, Mrs. Norberry, was eccentric and interesting. I remember her saying that she was painting her kitchen, and she painted right across the refrigerator and onto the wall. It impressed me that as an artist you could do that.

At UCLA, I started in the art department, and I immediately fit in. I felt like I found my place. I didn’t like high school, but I really felt comfortable at UCLA. I had great teachers, met good friends and artists, and we just had a good time. 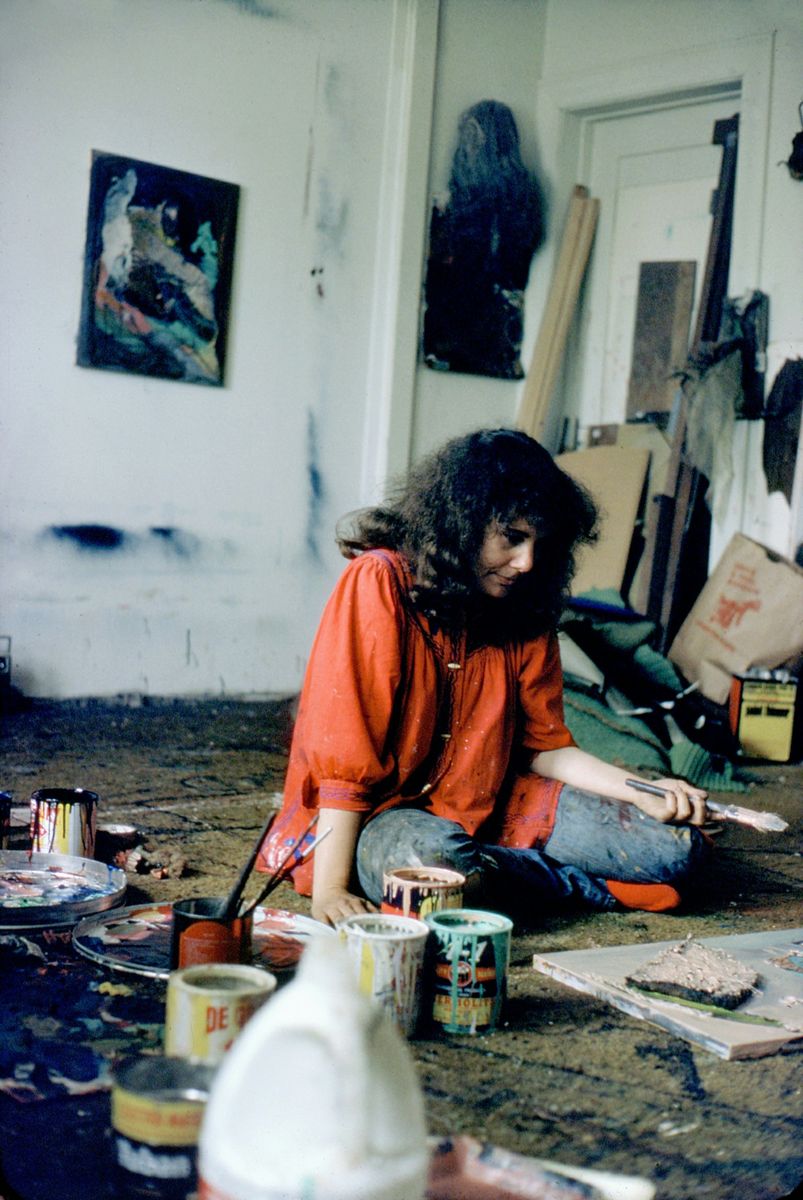 So, during your graduate education, you got your first taste for teaching. Did you know you wanted to pursue a career in teaching after you finished your M.F.A.?

I started applying for teaching positions right away. I got a job at Cal State Northridge for a couple of semesters, but I didn’t really fit in that well because I was “too intense — a UCLA person.” That’s what they told me. And that was fine with me.

I also became a teaching artist at the Los Angeles Photography Center in downtown. One of my friends was a photographer and was offered the position, but he couldn’t take it and suggested me. I said, “Sure,” because I needed a job. Then I thought, “Well, I don’t know. I’m not a photographer,” but I learned how to do it really fast, because I’d had Robert Heinecken as a professor.

Heinecken, like all the professors at UCLA, didn’t teach techniques. He taught creative process and how to approach the medium. So I was able to be flexible and teach across a variety of media. The job at the Los Angeles Photography Center, which was paid for by the city, had a kind of parks and recreation atmosphere. I was this bold new personality that came in. The guys were old style photographers. They knew technique, but they had no idea about contemporary photography, let’s just say. I brought that, and they were shocked. But they came to like me a lot, and I could see their humanity and grew to love them. So we created a way to relate to each other. I remember the director — an older man from the military — expected me to share an office with him. Women photographers in that scene were just totally ignored; it was a very male scene. These guys, all in their 40s, 50s, 60s, (and the women who weren’t squeezed out), were photographing young girls in their bikinis, and in these harem outfits and stuff. There was a closet that was filled with all of the props and costumes. So, I decided to throw out all the bikinis, harem outfits and props, and made that closet my office. I remember it was a big deal. They had to work really hard to make the desk fit through the door, but they liked me and made it work.

It sounds like you were really able to blaze your own trail and bring the organization into the present. How did you find your way back to UCLA?

After two years at the Photography Center, I moved back to Santa Monica, and was invited to teach at UCLA by Gordon Nunes. From that moment forward, I have really stayed within the department and the School of the Arts and Architecture.

A big shift came when I had to fight for tenure. I was the first woman nominated for tenure in 40 years in the art department. In the 1950s, there were women professors in the department, but not so much after the men came back from World War II. I tell people that I became an “adult” fighting for tenure, because I suddenly had to face my colleagues and convince them to vote for me, and to support me.

Eventually, I was awarded tenure, a huge moment for me. I fit within the department and believed in its philosophy. I could pull it along. I could help develop it. And I was committed to teaching. For me, UCLA has always been a protected and stimulating environment. The department has always honored art making, creative process, and intellectual development. It brought out and respected the best in me — what was most meaningful to me. Here at the school — in the art department — we can be artist philosophers. We can be artist sociologists. We can be artist ethnographers. Whatever we want, basically.

So another example of how you were able to push the envelope yet again by becoming the first female professor to be tenured in the department in decades. You were really finding your passion for teaching. What is it you love so much about teaching as a profession?

I love the kind of impact you can have as a teacher.

When I work with students, I always try to have a one-on-one conversation about their goals and their futures. I find out who they are, what they are concerned about, and what they are thinking. I help them articulate their goals.

I always tell students, “You’re going to be happiest and most successful if you pursue the path that is closest to your heart. It doesn’t matter whether your parents tell you to go into microbiology or something else. If really you want to be an artist, that’s what you should do, and besides, you’re never going to be able to compete with the other passionate microbiologists.”

I have always tried to help students figure out a logical, practical, grounded, and honest way to pursue their goals. They come back and tell me that it was super helpful, and it changed their lives. That’s why I like teaching, because you can have that kind of positive impact on people. 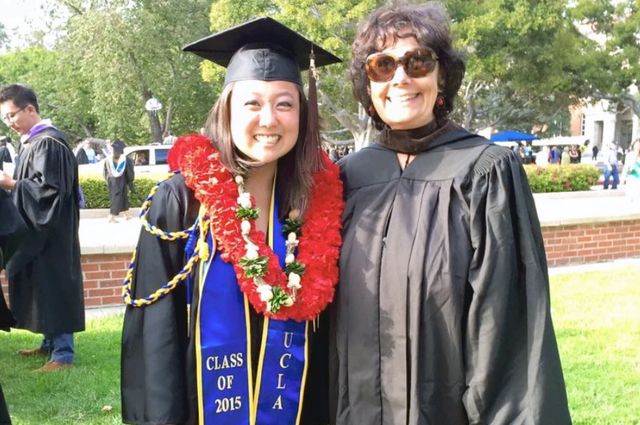 UCLA Arts
Barbara with Lindsey Kunisaki, a participant in the Visual and Performing Arts Education program, at UCLA commencement in 2015.

The Visual and Performing Arts Education program is truly unique and innovative in so many ways. It provides much-needed arts education to thousands of children each year who likely would not otherwise be exposed to that type of programming. Can you talk about why art matters and why access to arts education is so important?

Artists can envision different ways of being. Arts education produces creative human beings and independent thinkers. This makes the world richer and more diverse, and it’s also linked to survival. You have to be creative to survive and to lead. For example, I had to accept that teaching job in photography, even though I wasn’t trained in photography, but could do it because I was taught to be flexible and to think creatively. The same goes for VAPAE. I had never created an academic program within the bureaucracy of a public university, but I approached it like I approach building an artwork, and knowing and accepting that probably I would make mistakes. I did my research, I analyzed and critiqued existing programs based on my teaching experience, and I developed this new program. That’s what being an artist is. Going through experimentation, failure — and then revision — to create or express something new.

People educated in the arts are incredibly flexible and resilient because failure is inherent in our process. In our culture, people have a hard time with failure. We all try to look like we’re succeeding at all times. Artists are not surgeons. If we make mistakes, people are not going to die. We have the freedom to try new things, to experiment, and make mistakes and find new solutions. The more you experiment, and the more challenges you give yourself, the stronger artist — or employee, or citizen, or human being — you will become.