Eunice Lee, an associate professor at the UCLA School of Nursing, is the architect of a culturally sensitive, community-based educational program — named KIM-CHI — that has proven successful in inducing more Korean-American immigrant women to get mammogram screenings for breast cancer. KIM-CHI is particularly unique because it engages not just Korean-American women but also their husbands, who are traditionally the decision-makers in Korean households. Born and raised in Korea, Lee earned a Ph.D. in geriatric psychiatric nursing from Rush University in Chicago. At the University of Illinois at Chicago, she led a research team in establishing the efficacy of KIM-CHI with hundreds of Korean-American couples — research that continues to inform the design and implementation of culturally sensitive approaches to disease prevention. Earlier this year, Lee was inducted as a Fellow of the American Academy of Nursing in recognition of her sustained research and scholarship in cancer screening and early detection.

Why did you name your program for kimchi, the popular Korean fermented vegetable dish?
KIM-CHI stands for Korean Immigrants and Mammography: Culture-Specific Health Intervention. By creating an acronym based on a healthy staple that is eaten almost every day in Korea, I thought we could encourage Korean-American women to develop a habit of receiving routine mammograms, just as they have a routine habit of eating kimchi. Early detection of breast cancer is critical to reducing breast cancer-related illness and death.

What kinds of lifestyle factors figure in?
One is diet, having reduced access to healthy foods and more foods that could contain contaminants or food additives. Also, moving to a more industrialized society may increase exposure to environmental pollutants that have been implicated in an increased risk of breast cancer. 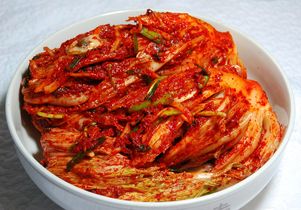 Lee wants Korean-American women to view mammograms as one of life's routines, just like eating the popular Korean dish kimchi is.

What cultural factors play a part in Korean-American women's low breast cancer screening rates?
In addition to limited English proficiency and a general reluctance to pursue preventative medicine, Korean-American women prioritize the care of family members over themselves. They have traditionally been raised to sacrifice their own needs to meet those of their husbands and children.

So in the KIM-CHI program, you essentially leverage the “put-family-first” tradition?
Yes. Korean-American wives need to hear from their family members — especially from their husbands — that maintaining their own health is important, and that using family resources such as time and money for disease prevention is important so that women can care for their family. We found early on that most Korean-American men didn’t know about the importance of breast cancer screening.

How does KIM-CHI work?
We developed a spouse-based educational intervention that we tested from 1997-2012 in a randomized clinical trial with almost 500 Korean-American couples that we recruited through Korean religious organizations. Half of the couples, the control group, took part in presentations and discussions about a healthy diet. For the intervention group, we produced a Korean-language DVD about breast cancer and screening, which included correcting common beliefs such as “No screening is needed if a woman doesn’t have symptoms.” The couples saw the film, followed by a Power Point presentation and group discussion. Each couple also had a homework assignment to write down two things they learned about breast cancer as well as two things the husband could do to be supportive of his wife getting breast cancer screenings.

And your results?
In a 15-month follow-up to the intervention, we found that women in the KIM-CHI group were twice as likely as women in the control group to get a mammogram — a very significant difference. We theorize that spousal support motivated the women in a number of ways, such as understanding that getting breast cancer screenings regularly helps women maintain wellness and, ultimately, better care for their families.

Is this approach — acknowledging and leveraging cultural beliefs instead of trying to change them — being used to promote health in other cultural groups?
We’re now preparing to test the paradigm of including spouses for cancer screening with Thai and Mexican women. There are a lot of studies that show that culturally sensitive approaches to health care improves patient care.  As health care providers, we must bridge the divide between the culture of medicine and the beliefs and practices that make up a patient’s value system.