Before a capacity crowd at the 2016 UCLA Extension certificate graduation ceremony on Friday at Royce Hall, keynote speaker and perennial Extension student Peggie Fariss recalled a time in the early '80s when her career with the Walt Disney Company was at a crossroads.

She had come a long way from her first job as a hostess at Disneyland's Storybook Land in 1965; she then was promoted to job as a meeting planner at the Walt Disney World Resort in Florida before being recruited by Walt Disney Imagineering to work on Epcot, where she ultimately led the historical research that went into the development of the Spaceship Earth attraction. 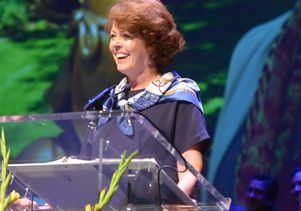 But as she moved into a more finance-oriented role, she found that the people around her at work "spoke a language I didn't understand." She knew she would have to crack that code, so "I sent away for the keys to the kingdom: the 100-page tome known as the UCLA Extension catalog."

Fariss went on to earn a certificate in business from Extension. That, she said, was when the "odyssey of learning that would engage and beguile me for the next 22 years" began. By the time she retired from the Walt Disney Company last April, Fariss had taken more than 40 Extension courses.

She exhorted her fellow certificate graduates to embark on their own educational journeys.

"I hope you will let your curiosity drive you to unknown places," she said. "Let your courage give you the strength to leave your comfort zone, to pursue your dreams, to fill your life with interesting people, and to follow your heart — even if it means scaling the Matterhorn."

As UCLA Extension heads into its 100th year in 2017 as one of the largest and most comprehensive continuing education programs in the U.S., a growing number of people are discovering the benefits of lifetime learning. This year approximately 2,000 students received their certificates in one of more than 140 certificate programs, ranging from patient advocacy to early childhood education, from feature film writing to information technology management.

Savitha Dowda, who attended the ceremony, earned her certificate in computer system analysis. "What I have learned here through the courses has really helped me with my job," she said.