Running 13.1 miles may seem like a daunting task to many people. But for heart transplant recipient Tony Flores, it was pure joy to finish the Revel Canyon City Half Marathon in Azusa on Nov.12.

It was a happy occasion that he shared with his physician, Dr. Martin Cadeiras, an assistant professor of cardiology at UCLA, and four UCLA heart-failure researchers, all of whom completed the race with Flores.

Since he had completed five Los Angeles marathons before he got sick, the 60-year-old Glendora resident started running again after his recovery as a way to exercise his new heart.

“He had a picture of him running by his hospital bed and while waiting for his transplant, and we talked about him going back to run,” said Dr. Cadeiras. “We even decided that we would run the first half-marathon together.”

While exercise post-transplant is encouraged, most patients don’t attempt long-distance running races, and advice on whether or not to attempt this varies case by case. Cadeiras says exercise is different because the nerves of the heart have been disconnected. Dehydration, muscle injury, cramping and sunburns are additional concerns.

“Patients need to be in a good condition and need to prepare by exercising regularly and progressively, ensuring appropriate hydration, avoiding the times of the day when it’s too hot and be able to rest as needed,” explained Cadeiras. 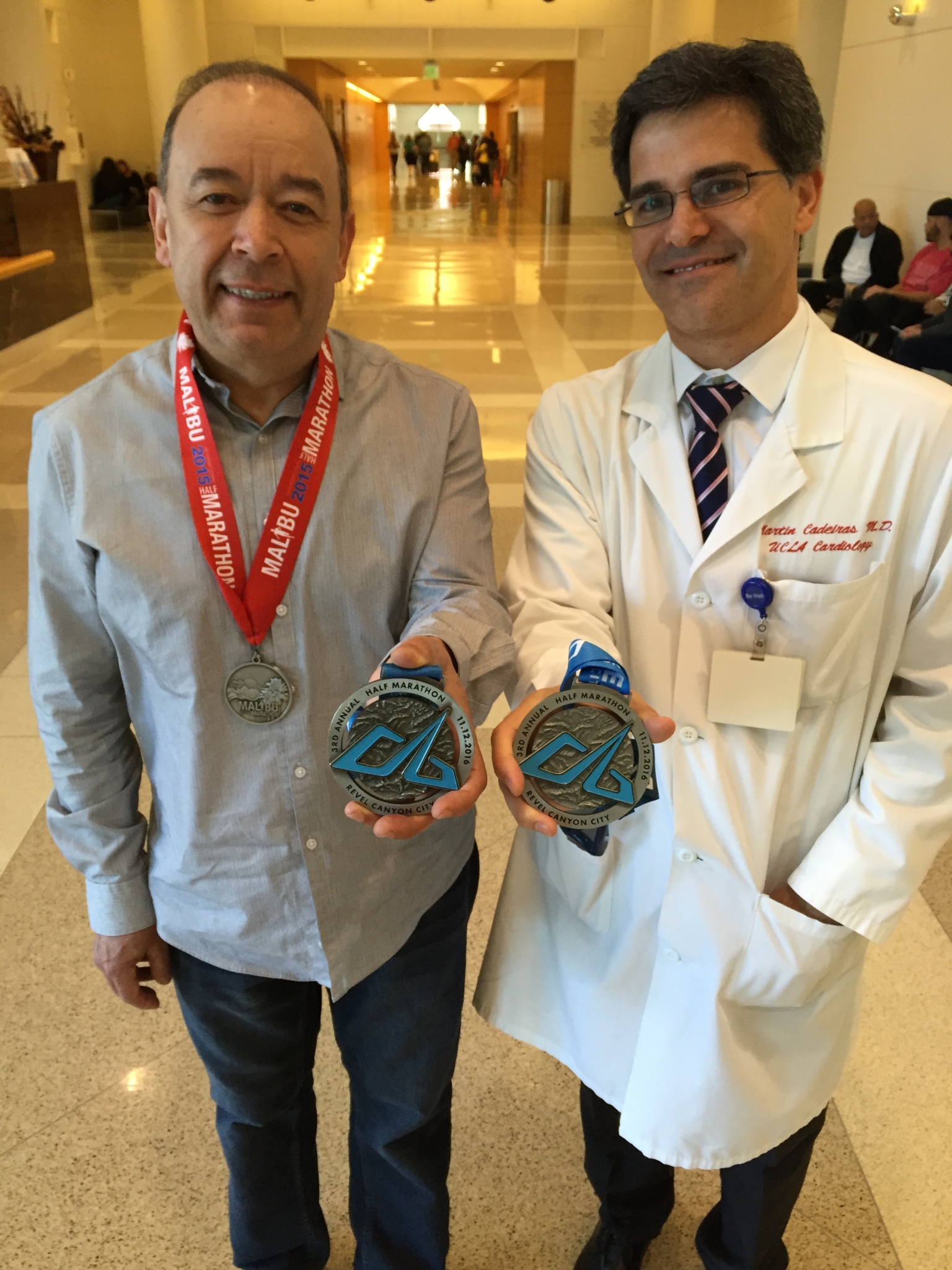 After Flores' transplant, the idea of running a race didn't come up again, but one day, Cadeiras got a text from Flores saying, "Completed my first 10 miles. Are you ready?”

Initially the plan was to run the Malibu Half Marathon in November 2015, but work duties prevented Cadeiras from running the race. Flores, nevertheless, completed it.

Then they chose to run the 2016 Azusa race together, and Cadeiras recruited four UCLA heart failure researchers to join them, along with Flores’ daughter, Stephanie.

“It was a privilege for me to run with them," Flores said. "Dr. Cadeiras is one of the doctors who saved my life.”

Flores said that since his transplant, he has not experienced any heart pain or discomfort, and his overall health seems the same, if not better, as when he was in his early 40s. He followed a training schedule for eight months and throughout his running he felt great.

“I’m thankful to all the staff at UCLA and the donor and their family. God bless them for giving me the miracle of a second life,” said Flores. “I’m thankful that I can still enjoy my family. They are part of my miracle, my new life.”

Dr. Murray Kwon, an associate professor of surgery who performed Flores’ heart transplant, added that one American dies nearly every hour waiting for a transplant; yet a single organ donor can save as many as eight lives.