Two urban planners at UCLA have taken a close look at the effects of cultural revitalization on two adjoining, but vastly different areas in downtown Los Angeles — Gallery Row and Skid Row — with one primary question is mind: Can local people intervene to shape the process of neighborhood revitalization and counteract the negative effects of gentrification?

Gallery Row is a gentrifying neighborhood in downtown Los Angeles with many new art galleries, trendy bars and restaurants. In contrast, Skid Row is a downtrodden area of dilapidated streets, buildings and cluttered sidewalks that support a temporary “city” inhabited by thousands of homeless people.

Two camps on this subject have emerged: One believes that cultural revitalization efforts accelerate growth while the other says that gentrification and displacement are the outcome. 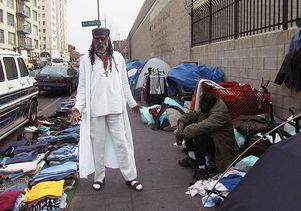 Ted Hayes/Wikimedia Commons
UCLA urban planners looked at the power of community organizers and other local residents to deal with gentrification.

“The urban growth and cultural revitalization currently taking place in the historic core of downtown Los Angeles is unprecedented, and yet downtown is also home to Skid Row, one of the largest concentrations of homeless individuals in the U.S.,” said Brady Collins, lead author of the study. Collins, who recently completed his Ph.D. in urban planning at UCLA, worked with UCLA Luskin urban planning professor Anastasia Loukaitou-Sideris on the report.

The authors describe cultural revitalization strategies as “promoting a neighborhood’s ethnic heritage, establishing a cultural or arts district or developing cultural and community centers or local museums.” Collins and Loukaitou-Sideris said the purpose of these strategies is to attract young urban professionals as well as business growth and investment.

Collins said that, after conducting nearly a year of research, “I knew I had found something big, and something I thought was important to share.” Collins, a Boston native, is currently a resident of Koreatown and has served as a member of the Wilshire Center-Koreatown Neighborhood Council.

In comparing the Gallery Row to Skid Row area of Los Angeles, Collins and Loukaitou-Sideris said they sought to answer questions such as how various groups — from local residents, advocates and community organizations to public and private developers, as well as investors and local, state and federal government — shape the process of revitalization and whether cultural revitalization actually benefits only “wealthy gentrifiers.”

“Gentrification is not always a zero-sum game where gentrifiers win,” said Collins. “By providing a snapshot of the efforts by individuals working on the ground and behind the scenes in Skid Row to shape the social and physical landscape, we show how marginalized groups can use art and culture as a means for resistance.”

In recognizing this, Collins said that the concept of “the space in between” was constructed as “a fraught space between the haves and have-nots, between revitalization and displacement, where human agency and community organizing can create real power.”

“With housing affordability at a historic low in L.A., gentrification and displacement represent real concerns for a number of neighborhoods,” Loukaitou-Sideris said. “Our study, however, demonstrates that it may be mistaken to perceive even the most disadvantaged neighborhood as a powerless victim lacking agency and determination to prevent displacement.”

Their study indicates that even in the case of Skid Row, community organizers can intervene and have the potential to mitigate some of the effects of gentrification.