Stan Paul | September 29, 2016
For three decades, Gerry Laviña has taken on the challenging job of a social worker, but the director of the Field Education Program in the Department of Social Welfare at the UCLA Luskin School of Public Affairs says that his profession has more than returned the favor.

“Every day as a social worker I have the opportunity to be inspired … by students, colleagues, our community, other social workers and others that support social justice,” Laviña said.

For his remarkable body of work, Laviña has been named the 2016 social worker of the year by the California chapter of the National Association of Social Workers. The award recognizes a social worker who has consistently demonstrated the core values of the organization's code of ethics: service, social justice, dignity and worth of the person, the importance of human relationships, and integrity and competence. He will be honored at the association's annual awards ceremony next month.

Laviña's educational and career path in social work began after he earned a B.A. in psychology at UCLA and then entered the Master of Social Welfare program at UCLA in 1986, but that path was rooted in lessons he learned early in life.

“I come from a family whose father was an immigrant from the Philippines and mother is an immigrant from Honduras,” said Laviña, a licensed clinical social worker. “My family had a strong belief in education, and they daily reminded us of the privilege and opportunities we had — relative to others in our community and the world — and that we have a great responsibility to give back.” 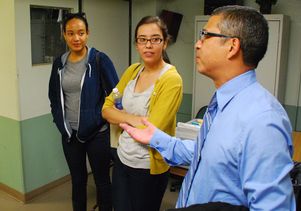 UCLA
Laviña works with second-year MSW students who are interning in the Los Angeles County Department of Mental Health and contract agencies. Outside academia, he's partnered with community organizations to promote diversity in education.

Laviña has spent his career giving back in a number of roles: as social worker, instructor, mentor and leader. His primary interests are working with children and families, particularly in the areas of school social work, mental health and multicultural issues.

“When I found social work terms like 'social justice' and 'dignity of every human being', my family’s belief system came to life,” Laviña said.

Asked what qualities every social worker should possess, Laviña said: “Openness to learning and lifelong learning; flexibility; a willingness to meet every individual/family/community where they are; a commitment to serving those with the least resources; and a belief in diversity that is actualized in our work.”

His latest honor recognizes a social worker who has broad professional experience, provides significant leadership in the field and has made a lasting impact on social policy, among other qualifications.

In UCLA Luskin’s Department of Social Welfare, Laviña is the faculty co-chair of the Diversity/Equity/Inclusion Committee; and faculty adviser for the Diversity Caucus and Latina/o Caucus. At Luskin, he also serves as the associate director of MSW education and as faculty adviser for the school’s D3 (Diversity, Differences and Disparities) Initiative. He also advises the dean on matters related to diversity, equity and inclusion.

Prior to becoming the director of field education, he served as field liaison with many local school districts, including LAUSD, developing and monitoring student internships in school social work. He also has served on the local and statewide board of the California Association of School Social Workers.

At Luskin, he has taught an advanced practice course in school social work as well as courses related to diversity. He worked for several years as a field consultant for the Inter-University Consortium program. Prior to joining the field faculty in 1993, Laviña was a social worker in the Family and Child Guidance Clinic of the Didi Hirsch Community Mental Health Center in Culver City, where he was also program coordinator and clinician in two different programs working with emotionally disturbed children and their families.

Outside academia, he has worked with community organizations that promote diversity in education, such as Los Amigos Council of Para Los Niños and Trabajadores de la Raza. He has received numerous awards, including being named the Field Faculty of the Year by the UCLA MSW student body, and the UCLA Faculty-Staff Partnership Award.

“I am energized by the dialogue in [the social welfare department], Luskin, UCLA and our community around diversity, equity and inclusion issues,” Laviña said. “My family has discussed these issues throughout my life, and I have professionally been working on this directly and indirectly for 30 years. While I know the struggle continues, I feel realistically optimistic about what is happening.”