Hitler was marching across Europe. Both families were Austrian, and they were Jewish. “My grandparents conveyed their desperation about whether they could get out,” Waldinger remembered. “This phenomenon is personally meaningful to me.”

The two teenagers went to high school and college in the United States. They met as graduate students at Columbia University. They married, and Roger Waldinger, their son, has dedicated his life to studying migration. “I’m the first American born on both sides of my family. It was deeply implanted in me as a child that both my parents and grandparents were recent immigrants.” More than anything, that fact had the biggest impact upon his future. “That was probably the most powerful influence.”

In a series of interviews around a book-strewn table in his office and at Lu Valle Commons, Waldinger, distinguished professor of sociology at UCLA and director of the UCLA Center for the Study of International Migration, spoke of the relocation of people among nations as a global phenomenon with political, economic and sociological implications. He said the strength of America’s core belief in immigration is evident from the difficulty President Trump has encountered in temporarily closing the nation’s doors to people from several predominantly Muslim countries as well as to refugees from around the world. 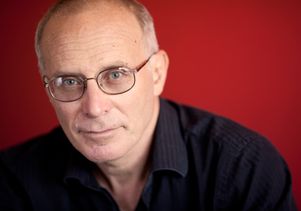 “Immediately, lawyers mobilized against his efforts,” Waldinger said, “and it wasn’t just the American Civil Liberties Union; it was a broad range of groups. The states of Washington and Hawaii took his entry ban to court, joined by many others, including Microsoft, Facebook and Google.”

Waldinger focused his concern, however, on unauthorized immigrants already within the United States, many of whom are feeling the lash of Trump’s aggressive deportation policies. The sociologist, who has recently finished his ninth book, which studies the American-born or -raised children of immigrants, said the undocumented face immense uncertainties in the era of Donald Trump.

In the immigration debate, Waldinger is a welcome rarity: an intellectually honest analyst who sees both the benefits of immigration and the dangers of open borders, a scholar willing to acknowledge that the evidence in this divisive conversation sometimes favors one side and sometimes the other.

Research shows that American public opinion supports legalization — even citizenship — for the unauthorized, Waldinger said. “If you look at polls, what’s striking is that people are much more strongly in favor of controlling immigration — having fewer immigrants, or not increasing their number. But there’s no question that the public is open to legalization [for migrants who are already here] — and if not legalization, then long-term authorization and a route to citizenship. Inside our borders, in effect, it’s one people. Whether they have citizenship or not, they’re part of the community. They’re part of the social fabric.

“There is an undocumented students program at UCLA,” Waldinger said. “There is one at every UC campus.” In the main hallway of the sociology department, near Waldinger’s door, is a rack where copies are available of a “Statement of Principles in Support of Undocumented Members of the UC Community.” It says: “The University of California welcomes and supports students without regard to their immigration status.” Short of a court order or other judicial demand, the university says, “we will not release immigration status or related information in confidential student records, without permission from a student, to federal agencies …

Not only polls or policies, but ethical considerations, as well, distinguish between immigrants already in the United States, regardless of status, and migrants seeking to enter, Waldinger said. “There’s a difference between the outside and the inside, which relates to the books I’ve been working on. Outside is different. In other words, ‘Who should we let in? They’re not our neighbors. They’re not our friends. They’re not our coworkers.’ The ethics of ‘who should we let in’ is a big mess. But on the inside, the ethical solution is easier. The ethical solution on the inside is to give unauthorized migrants a route to citizenship.”

It is also ethically right, Waldinger said, to facilitate their access. “It costs more than $675 to file for naturalization, and that’s going to go up. This is a significant sum for a family of four. And you have to put together a tremendous amount of paperwork. If we want these people to become Americans, why are we putting roadblocks in their way?”

His goal: creating a community of migration scholars

Roger Waldinger was born in New York City. He is 63 years old, tall, serious but easy-going, with a self-deprecating sense of humor. (‘You can’t hear it? I’m a New Yorker.”) He grew up in Washington Heights, surrounded by immigrants. “Everybody’s parents spoke with an ac-cent.” He attended Brown University, then worked three years for labor unions, including the International Ladies Garment Workers Union, which was built by immigrants.

During graduate work at Harvard, he took a course from an MIT professor writing a book about migration, who offered him a job as a researcher. Waldinger’s work grew into a dissertation for a Harvard doctorate.

For eight years, he taught at City College of New York in West Harlem, where many students were immigrants or the children of immigrants. He came to UCLA in 1991, where he directed the Lewis Center for Regional Policy Studies, then became chair of the sociology department. He has served as interim associate vice provost for International Studies. For the past 10 years, he has been instrumental in creating the Center for the Study of International Migration.

“Our goal is to generate an interdisciplinary community of migration scholars,” he said. Interest is high. “The rooms for our talks are filled to capacity. I think we connect with a significant audience.”

Read the entire story in the spring 2017 issue of UCLA Blueprint.