The final leg of the 2015 Law Enforcement Torch Run for Special Olympics hit Westwood Thursday afternoon. Nearly 30 runners, representing law enforcement agencies from around the world, including Australia, Hong Kong, Holland, Canada and the United States, made their way down Westwood Boulevard, stopping at Broxton Avenue where they were greeted by an enthusiastic contingent of Bruins, including the UCLA pep band, the UCLA Spirit Squad and Joe and Josephine Bruin.

“This week, over 6,500 athletes from 165 countries have descended upon Los Angeles to show the true meaning of courage and joy and determination,” said Bill Roth, UCLA’s new play-by-play announcer for football and basketball, in his opening remarks to an audience of roughly 200 people. 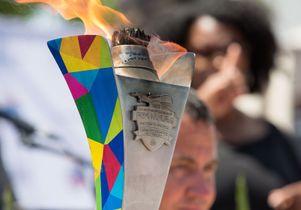 From July 25 to Aug. 2, athletes ranging in age from 8 to 71 will be competing in 25 different sporting events at venues throughout the city. Eight of those events are being held at UCLA, which is housing roughly half of the athletes and coaches on campus.

The Special Olympics were founded in 1968 by Eunice Kennedy Shriver and have since become a global movement that uses sports to foster acceptance and inclusion of people with intellectual disabilities. UCLA was the main venue for the third international Special Olympics in 1972. The Special Olympics World Games beginning Saturday is the largest event held in Los Angeles since the 1984 Olympic Games and is this year’s largest humanitarian and sports event in the world.

The Flame of Hope, which was lit by the sun in Athens, Greece, in mid-May before traveling by air to the United States, has moved across the country as part of the law enforcement run. From Westwood, it will make its way to the Los Angeles Memorial Coliseum, where it will be used to light the cauldron at the Special Olympics World Games Opening Ceremony on Saturday. The star-studded event will feature performances by Stevie Wonder, Avril Lavigne, O.A.R., Cody Simpson and Nicole Scherzinger, with special appearances by First Lady Michelle Obama, late-night television host Jimmy Kimmel, actresses Eva Longoria and Lauren Potter, and Olympians Michael Phelps and Greg Louganis. Tickets are required.

“I think that this intersection means more than just us being here today,” said Rafer Johnson, a Special Olympics co-founder, UCLA alumnus and Olympic gold-medal decathlete. “It means that our arms are out and open to welcome the athletes that are going to be here, and we’re as spectators going to be able to see these athletes reach a point and may even hear them say ‘I was the best I can be.’”

Also among the runners and speakers was Brett Laza, 23, a Special Olympics global messenger from Phelan, CA. Laza, who has been involved with Special Olympics for 12 years competing in track and field, floor hockey and tennis, traveled to Greece for the lighting of the torch. “This was a huge honor and an amazing experience for me.”

He thanked the audience, the special guests in attendance and the law enforcement community for their ongoing support of Special Olympics and its athletes.

“With Special Olympics I am able to meet lots of people and make lifelong friends. It gives me self-confidence and courage without being judged.” 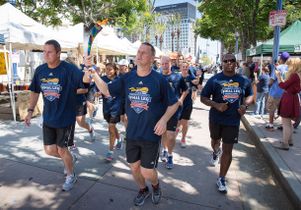 Tracy James, a part-time fitness instructor at UCLA Recreation, was one of several members of the UCLA community who came out to welcome the torch run team.

“I’m really excited for the events this weekend,” James said. “I work on campus so I thought it would be a fantastic way to catapult the whole experience. I’m really inspired by the athletes.” She plans to come to campus on Sunday to check out some of the competitions.

Sporting events at UCLA start Saturday at 9 a.m. with 11-a-side soccer at Drake Stadium and on the North Athletic Field; five-a-side soccer at the Intramural Field; and tennis at the Los Angeles Tennis Center. Sunday features tennis, softball, soccer and gymnastics.