Seated in the center of the Royce Hall stage, Marvel Comics legend Stan Lee regaled the sold-out crowd at the 2017 UCLA Extension certificate graduation ceremony with the story of how Spider-Man was born.

Tasked with creating a new hero back in the early 60s, Lee recalled seeing a fly crawling on the wall, and thinking, “Hey, if I could get a superhero that could stick to walls, man, that would be cool,” he said. “No, I’m lying to you: I don’t think the word ‘cool’ was in use then. I probably said, ‘It’ll be groovy.’”

Unfortunately, his publisher hated the idea — but Lee was able to introduce Spider-Man in the final issue of a title that was slated for cancelation, he said.

When that issue sold unexpectedly well, Lee said, his publisher came back to him saying, “Stan, Stan! Remember that character we both loved so much? We’re going to do him as a series!” 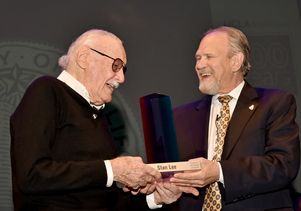 When the laughter died down, the 94-year-old Lee told the graduates the moral of the story: “If you’ve got an idea that you genuinely think is good, don’t let some idiot talk you out of it,” said Lee during the ceremonies held June 30. “You can only do your best work if you’re doing what you want to do, and if you’re doing it in the way that you think it should be done.”

Extension Dean Wayne Smutz presented Lee with the new Icons of L.A. Award, which honors members of the Los Angeles community whose accomplishments reinforce UCLA Extension’s belief that lifelong learning is the key to personal growth and societal impact.

Christine Simmons, president and chief operating officer of the WNBA’s Los Angeles Sparks, and president of the board of directors for the UCLA Alumni Association, also spoke at the event, welcoming the certificate graduates into the association.

UCLA Extension celebrates its 100th anniversary in 2017 as one of the largest and most comprehensive continuing education programs in the United States. This year, approximately 2,000 students received their certificates in one of UCLA Extension’s more than 180 certificate programs, ranging from early childhood education to accounting and from feature film writing to information technology management.

“Gardening was a passion of mine, but I was also looking to make a career change,” said Tanya Bartels, who earned a certificate in horticulture. “My next step will be interning with a teacher of mine part time, and from there I’ll look to grow my own business.”

Tiffany Tan, who earned a paralegal certificate, had always been interested in the law, “but right now I wasn’t sure if I wanted to jump straight into being an attorney, because law school is quite something,” she said. Tan added that she was incredibly inspired by the ceremony. “I loved that we got to hear Stan Lee speak. When I saw that he was the keynote speaker, I was like, ‘All right, I’m coming.’”