UCLA has established the Pourdavoud Center for the Study of the Iranian World, the first center in the Western Hemisphere that aims to advance the knowledge of ancient Iranian languages, history and religions.

The center is named for the late Ebrahim Pourdavoud, a pioneering scholar of ancient Persia and a professor in Europe, Iran and Iraq. The center was made possible by a gift from his granddaughter, Anahita Naficy Lovelace, and her husband, James Lovelace.

“My grandfather devoted a lifetime to the study of the history, languages, religions and culture of ancient Iran. I am so grateful that Jim and I have the good fortune to be able to honor and extend the impact of his important contributions,” Anahita Lovelace said. 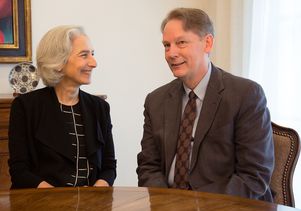 The mission of the Pourdavoud center is to engage in transformative research on all aspects of Iranian antiquity — including its reception in the medieval and modern periods — by expanding on the traditional domains of Old Iranian studies and promoting cross-cultural and interdisciplinary scholarship. The center will complement UCLA’s well-established doctoral program in Iranian studies — founded half a century ago in 1963 — which attracts 1,000 students from all over campus to its courses each year.

“At UCLA, we recognize that the study of ancient cultures is more important today than ever,” said David Schaberg, dean of humanities in the UCLA College. “It reveals the rich tapestry of human history and identity, and allows us to understand and uphold the highest values our forebears espoused.”

The complete story is posted on this UCLA College website.