Music and movies have been the main components of David Leaf’s 30-plus-year career as an award-winning filmmaker-biographer. His projects have opened up the lives of the greatest music makers of the 20th century to millions of people through such acclaimed feature-length documentaries as “The Night James Brown Saved Boston” (2008), “The U.S. vs. John Lennon” (2006), “Beautiful Dreamer: Brian Wilson and the Story of ‘SMiLE’” (2004) and “Bee Gees: This Is Where I Came In” (2001).

Now an adjunct professor at UCLA Herb Alpert School of Music in its program on the music industry, technology and science, Leaf has drawn on his vast knowledge of popular music and his industry relationships to create an online course, “Songwriters on Songwriting: Killer Hooks, Essential Songs and Songwriters of the Rock Era … and Those They’ve influenced.”  “It’s the only course of its kind in the UC system, and possibly the planet,” Leaf said. Among his classroom guests are seven members of the Songwriters Hall of Fame, three Rock and Roll Hall of Fame inductees, Grammy Award winners, and other legendary and contemporary songwriters.

His students have described his class as inspiring, motivational and “a truly unique contribution to American cultural history.” UCLA Herb Alpert School of Music communications director Ariane Bicho caught up with Leaf to find out more about the class for this edited Q&A.

First of all, congratulations on creating such a popular class. What makes a great song great?

Whether we’re talking about the best of Bach, Mozart, Beethoven or Gershwin, for me a great piece of music or a song evokes feeling. Does the music make me feel strongly?  It doesn’t matter so much what the emotion is. But does a chord, guitar lick or piano line, or a two-, four- or eight-bar musical phrase bypass your brain and go straight to your heart? Does it stick with you and demand that you search out the song, buy it, download it or add it to your Spotify list right now?

What’s also essential to me is that the melody is so strong that you listen repeatedly so you also "get" the lyric. Otherwise, to me, the words are more like a rhyme scheme with a beat. Which, ironically, is what separates my favorite era of songwriting — the rock era — from the most important music of the past 25 years — hip-hop — where rhythm and rhyme are typically far more prominent than melody.

How can looking back at the great songs of the past serve as a guidepost for aspiring songwriters today?

The more you know about music and music history, the better prepared you will be to write great music. As one guest told my class, “If you want to write a song that Beyoncé will sing, it’s not enough to write a song that sounds like something she would sing. You have to understand and absorb her influences, so that your song will have the kind of depth that will connect with her.”

Your guests are multigenerational. What does songwriting legend Burt Bacharach, who ruled the charts for three decades beginning in the 1960s, have in common with Mike Posner, the 29-year-old Grammy-nominated singer-songwriter, poet and rapper?

My guests all have completely different origin stories but many things in common. They have spent what I call a “life in song,” devoted to making music that will reach people. What unites them is what I call “the four Ds”… devotion, dedication, discipline and determination. That is what turns somebody who loves music into somebody who makes music professionally.

What can students gain by examining the work and lives of people like Bacharach, Posner, Rock and Roll Hall of Famers Barry Mann and Cynthia Weil,  and Jon Platt, the CEO of Warner/Chappell Music?

One of the guiding principles of the course is that my guests are “modeling” success for the students. The goal is for the students to learn that people of enormously different backgrounds achieved their dreams by never giving up on them.  And regardless of what field one is going to pursue, these same principles apply. Music is both “fun” and a truly universal language of emotion; it allows the students to enjoy the journeys of my guests and almost subconsciously absorb life lessons. 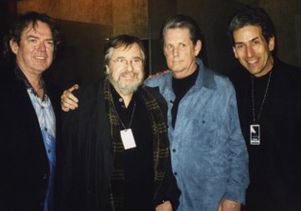 There are quite a few universal themes that emerge from the guests; by the end of the quarter, the students have heard a dozen or more successful people talk about what it took for them to stay on their path.

Rejection, for example, makes some people give up. Our guests come to accept rejection as part of their daily lives. They learn from their failures, grow from them and become better and more successful artists. I encourage my students, especially the songwriters, to make rejection part of their daily lives. And because I’m still a working writer who gets rejected regularly, they understand that this isn’t just teaching or preaching, but shared experience.

Overall, there are so many great lessons.  Jon Platt speaks to just the pure work ethic it takes to succeed. He says it clearly: “Nobody is going to outwork me.”  When he said that to himself 20-plus years ago, he had just gotten his first job in music publishing in L.A.  Now he’s CEO of Warner/Chappell Music.

Imagine I’m a student songwriter. What will it take to get my songs out in front of the public these days?

Getting songs in front of the public today is so easy — just post them online at any number of easily accessible sites.  Or your own site.  The bigger challenge is how to get the public and the industry’s attention. In that sense, nothing has changed: The way songwriters get their songs heard today is to play them. Or find a peer who wants to sing or perform them. Everybody begins with an audience of one — himself or herself.

Whether it’s on campus, in a small club where there are showcases, or at parties, play your music. If you can double your audience of one every month, within three years you will have an audience of millions. Songwriters should be obsessively submitting their songs to music publishers, artist managers and anyone else who books music. Nobody will hear your songs if you keep them in your computer. Students today know how to brand and market themselves through social media. Using those same skills to get your songs heard is the next step.

Will taking this class make me a better songwriter?

Yes.  Learning from successful songwriters will help you, inspire you, motivate you. But ironically, that’s not the primary goal of the course. Or maybe not even the secondary one.

But the goal of my course is to inspire students to devote themselves to their individual dreams, whatever they might be — medicine, law, engineering, architecture, writing computer code. Finding and pursuing your passion is what turns dreams into life.