Depression affects one in four women and one in six men. It is the cause of more than $200 billion in lost productivity, work absenteeism, and disability and health care costs annually, and is believed to contribute to roughly a million suicides worldwide each year.

These were among the statistics experts shared at a Zócalo/UCLA discussion on depression and the efforts UCLA is undertaking to better diagnose and treat it. The event, which was held Dec. 11, drew a packed house to the National Center for the Preservation of Democracy in downtown Los Angeles.

“It’s multifaceted, the issues of depression, and so it certainly has immersed our school from a research perspective,” said Block, adding that although UCLA is a research institution it is also an employer and home to students. “So we really feel that not only can we learn about this and hopefully provide some cures more broadly, but we also help our own community as well.”

In 2015, UCLA announced its plan to raise the profile of depression on national and international research agendas by launching the Depression Grand Challenge, an effort that brings together 100 researchers from 25 departments with a common goal to cut the health and economic implications of depression in half by 2050.

The core of the Depression Grand Challenge is a 100,000-person study, led by Flint, which will be the largest ever genetic study of a single disorder.

In support of this effort, UCLA began providing free voluntary screenings for depression to all incoming students this fall. To date, 3,000 students have been screened, Block said, noting that if mental health issues like depression can be identified early the outcomes tend to be better and remedies less complex.

In response to the screenings, several hundred students were provided with online training to combat mild depression and sadness, Block said. Others with more serious symptoms were guided to different forms of treatment. Plans are in the works to eventually extend these screenings to the entire UCLA community.

Flint, who previously worked at the University of Oxford where he led a study of 10,000 Chinese women and was the first to report a link between depression and particular genes, explained that the severity and longevity of depression varies among individuals, but that understanding the genetic underpinnings of the condition may help experts design better therapies.

“The big advantage with the genetics approach that we are developing is that … rather than throwing darts at a dartboard we can actually hit the target directly each time,” Flint said. 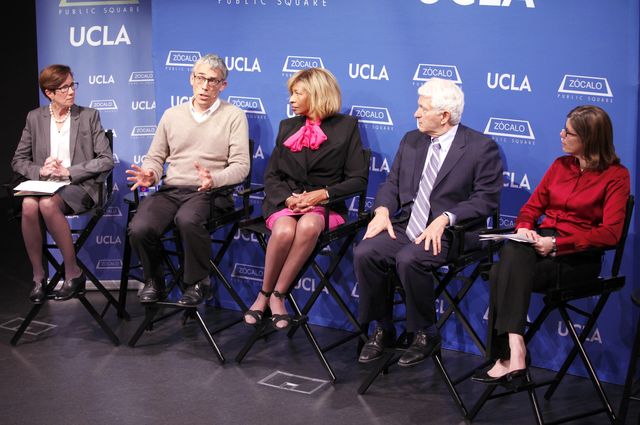 When asked about what therapies and lifestyle factors might alleviate the symptoms of depression, Robinson Beale of Blue Cross of Idaho, acknowledged that different people respond differently to treatment and it can be challenging to find solutions. For example, she said that medication is a common treatment but is effective in only 37 percent of people on the first trial. Subsequently medication may be changed. She also spoke about research into transcranial magnetic stimulation and electroencephalography.

“There is nothing that tells you, when a patient walks through the door, which of these treatments are going to be powerful or effective with them,” she said.

“It’s really trial and error and I think that’s the most unfortunate part about it, so we hope you hurry up and find it,” Robinson Beale continued as she looked to Flint and Block.

Sadly, less than half of people with depression actually get treatment, said Gruttadaro, who responded to questions about why people don’t seek help and the role social stigma may play in that choice.

“They may just write it off and say ‘oh this is just something that I’m going through, I’m going to get through it,’” Gruttadaro said. “They don’t know when they start to have these experiences over a long period of time that they need to get help, so they wait.”

She said that early diagnosis and early treatment can lead to better result as it does for any health condition, and that screenings and reducing stigma associated with depression are important ways to support that.

“I think we need to work at it. I think what UCLA is doing with the screening helps to normalize it,” Gruttadaro said.

In addition, technology is taking an increasing role in the battle against depression through telepsychiatry and mobile applications designed to help with diagnosis and treatment.

“It’s a little bit of a wild wild west out there right now because there’s not really a process for evaluating some of this technology that’s being developed, and there’s been studies around that as well, but I think technology, especially when it comes to depression, will continue to play a big role in the future,” Gruttadaro said.

UCLA currently has a researcher using sensors to explore the possible correlation between sleep, social media activity, level of physical activity and the first signs of depression, said Block, who spoke about how system’s similar to Amazon’s Alexa could one day be used to help monitor a person’s mental health by noting changes in a person’s voice.

“I think technology is going to play a huge role, including artificial intelligence,” he said.