Five years ago, a group of UCLA undergrads came together with a common goal — to build a small satellite and launch it into space. In the years since, more than 250 students — many of whom are now UCLA graduate students and alumni — have been the mechanical engineers, software developers, thermal and power testers, electronics technicians, mission planners and fabricators of the twin Electron Losses and Fields Investigation CubeSats, known as ELFIN.

Although UCLA has been building space instruments for NASA and other international space missions for more than 40 years, and members of its faculty have been critical contributors to space science, ELFIN is the first satellite mission built, managed and operated entirely at UCLA. And even more impressive, just about all of it has been done by the students.

This week, dozens of ELFINers (a nickname earned by those who’ve worked on the satellites), will drive about 150 miles up the California coast from Los Angeles to Vandenberg Air Force Base near Lompoc, to watch the product of their effort ascend into orbit.

“Just seeing all the hundreds of hours of work, that not just myself but others too, have put into this project, the many sleepless nights, the stressing out that you’re not going to make a deadline — just seeing it go up there … I’m probably going to cry,” said Jessica Artinger, an astrophysics major and geophysics and planetary science minor who will begin her fifth year this fall.

The two micro-satellites, each weighing about eight pounds and roughly the size of a loaf of bread, will help scientists better understand magnetic storms in near-Earth space. These storms are a typical form of “space weather” that is induced by solar activity, including flares and violent solar eruptions. Some solar outbursts can impact Earth, generating large amounts of invisible electromagnetic energy that transforms our local space environment.

“Magnetic storms are not just interesting space phenomena. They can energize electrons to high energies that can damage or even destroy orbiting satellites we depend on for GPS, communications and weather monitoring,” said Margaret Kivelson, UCLA professor emeritus of space physics. “They can also enhance space electrical currents which flow onto Earth, and could damage the power grid. Space weather research is also crucial for space tourism and space exploration.”

Currently, scientists’ ability to accurately model and predict space weather is in its infancy, just like meteorology was at the turn of the last century. ELFIN will make headway toward better understanding these phenomena.

ELFIN will go up as a secondary payload with the ICESat-2 mission at dawn on Saturday, Sept. 15, aboard the trusted Delta II, the final and hopefully 100th consecutive successful launch of this type of rocket. The launch will be streamed live on NASA TV’s YouTube channel, as well as on UCLA social media (follow #uclaELFIN).

Following the launch, many ELFINers at Vandenberg will come back to the campus command center to eagerly await the first Bruin transmissions from space, which are expected about 10 hours after blast-off. UCLA students will be directly involved in day-to-day mission activities and will have privileged access to ELFIN’s data. They will track and command the satellite via a custom-built antenna atop Knudsen Hall and will download data directly to the mission operations center located in the Earth, planetary and space sciences department. The ELFIN website will have interactive tools so the public can track and listen to the spacecraft as it passes overhead twice a day. The CubeSats are expected to remain in space for two years, after which they will gradually fall out of orbit and burn up in the atmosphere like shooting stars.

In fall 2017, as head of ELFIN’s fabrication team, Artinger led a small team that worked tirelessly in the EPSS prototyping lab using band saws, drill presses and a CNC machine (which is used to carve and smooth metal parts) to meticulously craft tightly toleranced components to meet their completion deadline.

“There was a lot of working things out in your head before machining it, especially for safety reasons,” said Artinger, who gave a final inspection by painstakingly sanding each part and then re-measuring each and every hole, comparing them to the technical drawings for accuracy before sending them upstairs to the mechanical team for assembly. The aerospace-grade tolerance requirement across the 13.5-inch long spacecraft, she said, was two thousandths of an inch — about half the thickness of a standard sheet of paper. The team also had to machine the sensitive energetic particle detector frames to an incredibly precise 1/10,000 of an inch, she said. 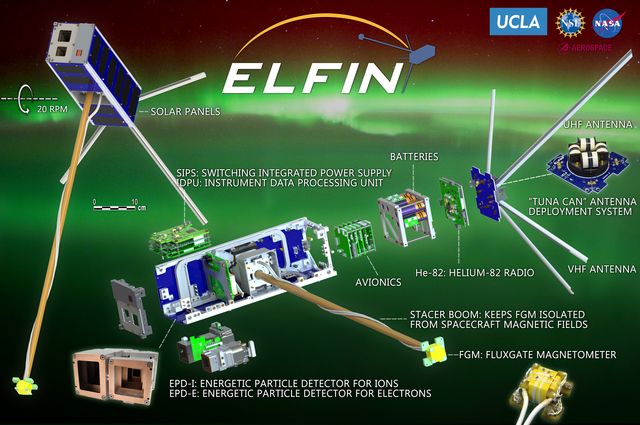 Artinger, a transfer student who graduated from Orange Coast College in 2016, plans to become a community college professor and can’t wait to use her ELFIN experience to inspire a new generation of students. She says ELFIN really opened her eyes to the power of mentoring through research and further solidified her commitment to teaching topics related to space science.

“Maybe we can discover something at the community college I’ll be working at using the actual data from the satellite that I helped build,” she said. “That would be really cool.”

Ethan Tsai learned about ELFIN when he was a UCLA sophomore. Despite having no background in space science, the former physics major started to work on simple tasks and gained the necessary skills to become the project’s attitude determination and control subsystem lead. Now studying for his master’s in electrical engineering, Tsai is ELFIN’s project manager.

“I was pretty honored to be able to work on a mission like this,” he said, adding that he never imagined being involved in a NASA mission as an undergraduate. “It wasn’t until about two years into the project that I started to understand and appreciate the quality of the work we were doing and how it’s going to actually affect not just our mission and the students around us but the scientific community as a whole.”

Tsai said he’s excited about the infrastructure he has helped create to make UCLA a “space campus,” supporting students who will work on future satellite missions.

The project has been supported with funding from the National Science Foundation and NASA, with technical assistance from the Aerospace Corporation among other industry partners and universities.

Those who have witnessed the aurora borealis and australis illuminate the skies, also known as the northern and southern lights, have experienced the beauty and power of space weather, likely without even knowing it.

“The aurora is sort of a TV screen that shows us what happens out in space.” said Vassilis Angelopoulos, a UCLA space physicist who got his doctorate at UCLA and serves as ELFIN’s principal investigator. “Space physicists can tell if something interesting or important is going on in space by looking at the aurora.”

ELFIN aims to observe the complex sequence whereby magnetic storms form waves near Earth, accelerating and forcing electrons to fall into the atmosphere, while a network of all-sky cameras across North America captures the resulting brightening of the auroral lights. The field of space science benefits from multi-satellite missions like ELFIN because of the ever-growing need to know about the dynamic conditions in space.

“Just like with atmospheric weather,” Angelopoulos said, “you need multiple space weather buoys to feed their data into our space weather models and be able to make predictions of conditions in the future.” 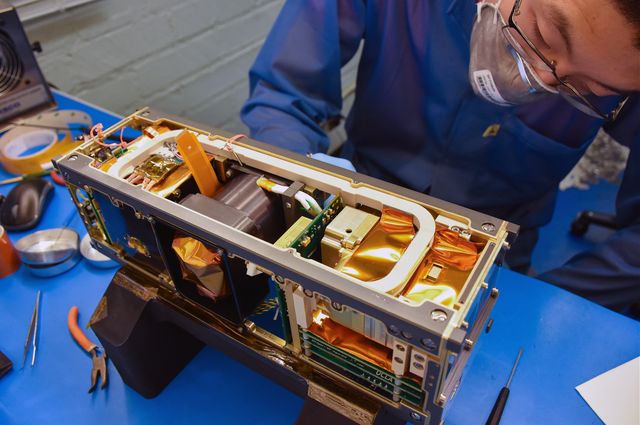 UCLA
Ethan Tsai works on the flight model assembly for the CubeSat ELFIN.

CubeSats fill this need because of their compact size, relative affordability ($300,000 compared to several hundred million dollars for a typical research satellite), and how quickly a team can go from prototyping to launch compared to standard-sized satellites. CubeSats uniquely allow students to witness end-to-end satellite mission development, testing and operations all within the span of their undergraduate studies.

For ELFINers, being part of an endeavor of this magnitude is reward enough, but working on this project also has professional and scientific benefits, Angelopoulos said. In addition to the leadership, interpersonal, problem-solving and technical skills they’ve developed, ELFINers are also contributing to the production of knowledge, something that is incredibly valuable to society and to their careers as scientists and engineers.

“As a researcher it’s important to not just analyze data that others collect, but to be involved in designing your own unique experiments to explore new key science questions. This is how space science started, with experiments on small rockets where students were involved in the nuts and bolts of them, and similarly with CubeSats, this is where the future of space science education is headed now,” Angelopoulos said.

Building on the opportunities that exist here at UCLA, and knowing the impact that experiential learning can have on a student’s academic life, Angelopoulos wanted to find a way to bring CubeSat development into the undergraduate experience.

“CubeSats are ideal because they create an environment where students from all walks of life, from all disciplines, can come together and practice what they’ve learned during their formal education in the context of a realistic environment,” Angelopoulos said. “This is exactly what academia, industry and research organizations around the country need — and they tell us that. This is the kind of experience they want in people who are applying to graduate school or who are applying to work in industrial firms because these are people who think on their feet and innovate.”