In a studio in the east side Los Angeles neighborhood of Lincoln Heights, sits one of Oscar Magallanes’ latest paintings called “Blaxican.”

Magallanes painted it as a present for his sister, Iesha, for her graduation from the University of Notre Dame. His sister’s face, in profile, is surrounded by icons that reflect their upbringing east of downtown L.A.: a prickly pear tree, a Chihuahua, a helicopter shining a search beam, the silhouette of downtown skyscrapers amid the San Gabriel Mountains. In one corner is an eagle eating a snake, an Aztec symbol that appears on the Mexican flag. The interlocked letters LA sit above the interlocked letters ND, for Notre Dame. The word “Blaxican” appears below his sister, in cutout gold letters hanging from a chain.

“She would often say that she was a Blaxican, because she’s adopted and she’s African American, but she grew up with Mexicans. So, she often identifies culturally as being Mexican,” Magallanes said. The painting appeared in a 2019 group exhibition called “Black, Brown and Beige” at Self Help Graphics & Art, an arts education organization in Boyle Heights.

The painting is indicative of Magallanes’ work, which is often autobiographical and incorporates symbols of his Chicano upbringing and his ancestry. One of his sculptures is of a street vendor in a Dodgers cap pushing a paletas cart. His mixed-media pieces combine consumerist symbols, like Mickey Mouse ears and the McDonald’s golden arches, with Aztec and Mexican figures, animal skulls and riot police. Through his artwork, Magallanes examines the locus where iconography tips into propaganda, and activism into nostalgia.

Shaped by his upbringing

Magallanes, who graduated in 2017 with his bachelor’s degree in art from UCLA, is the son of migrant farm workers and grew up in Azusa, in the San Gabriel Valley. “Back in that time, it was 100% Mexican,” he said. Instead of galleries and museums, his early exposure to art came in the form of the elaborate block lettering of cholo writing and the meticulous airbrushing on lowriders.

As a teenager Magallanes was arrested several times and was briefly expelled from school when he was 15. He credits Ryman Arts, a studio art instruction program, with setting him on a different path. He turned to making art that addresses the criminalization of young people of color, and how certain communities are afforded access to art. And he does it in a style rooted in the aesthetics of his culture.

“We did have our own art all the time, but it was always looked down upon. It was always just seen as craft or folk art, but that was always our art,” Magallanes said. “And then I think of how highly produced lowriders are. I mean, how was that not an art form?”

While participating in the Ryman program helped Magallanes find an outlet for his voice, it was at UCLA that he began to find fellow artists he could join with in community. Among his classmates were Adrian Alfaro, Alfredo Diaz, Aaron Estrada and Gustavo Martinez. They all bonded in their desire to see their curriculum include non-white and non-European artists, and in their mutual appreciation for the traditions of muralism and public work. 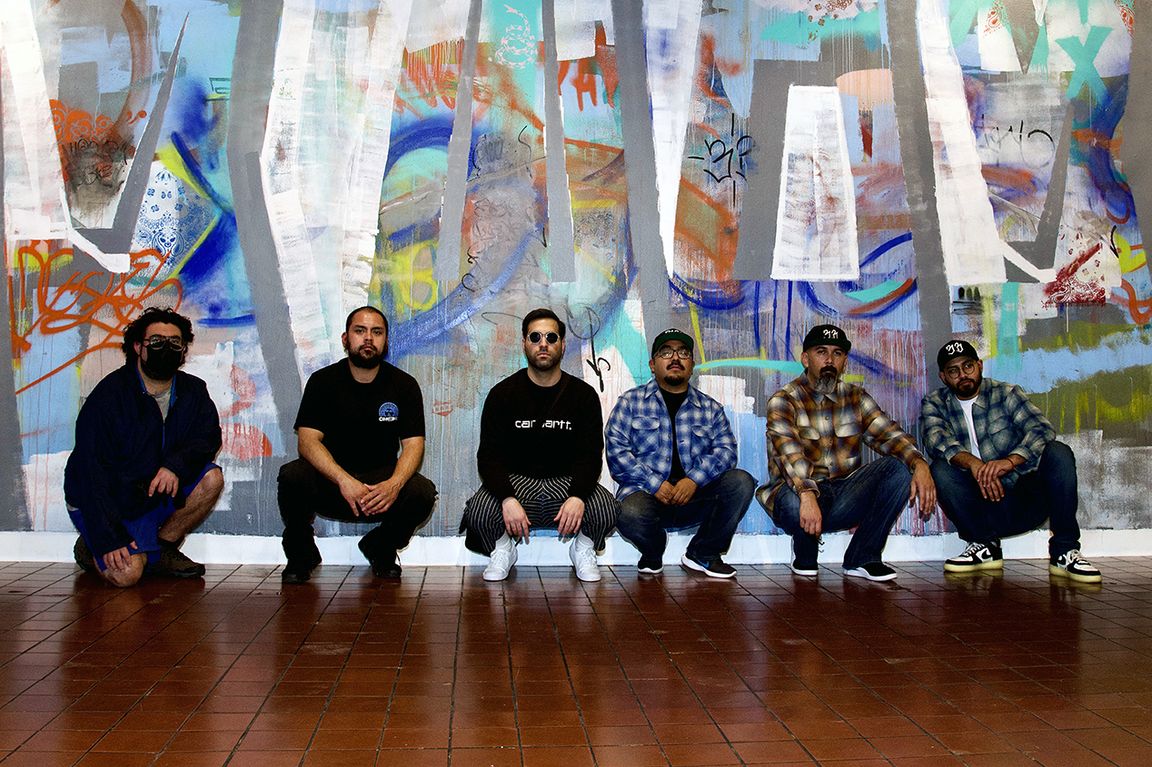 “We quickly saw that we all had something in common, not just in the way we look, but definitely the work we make, and how we address what we address in our work, and realizing that it’s part of Chicano history in art,” said Diaz, who like Magallanes, has a deep appreciation for lowriders.

“They are literally vehicles that we placed ourselves into to navigate the world we exist in,” he said.

Today, Alfaro, Diaz, Estrada, Magallanes, Martinez and a sixth member, Michael Khosravifarb (who did not attend UCLA) make up the 3B Collective.

After graduating, the collective began work on installations at local art spaces LAXART, LACE (Los Angeles Contemporary Exhibitions), and The Mistake Room, and collaborated with artists including Barbara Kruger, a distinguished professor emerita of art in the UCLA School of the Arts and Architecture, and Emory Douglas.

‘Our history is not baggage’

The collective’s work is unapologetically Chicano, with an embrace of the bright colors and folkloric symbols of their Indigenous and Mexican heritage, and the look of their childhood neighborhoods.

“It's difficult to find local histories, because so many times the history of many regions are told through ranchers,” Magallanes said. “So we have to go back and think about who was here before colonization, and who was here before this was the United States.”

The history of the San Joaquin Valley comes to life in their mural at Cal State Stanislaus. It spans two floors of the staircase of a newly remodeled library, and combines images of Yokuts dwellings made of woven reeds, patterned baskets, workers picking sweet potatoes and a map of the nearby rivers. 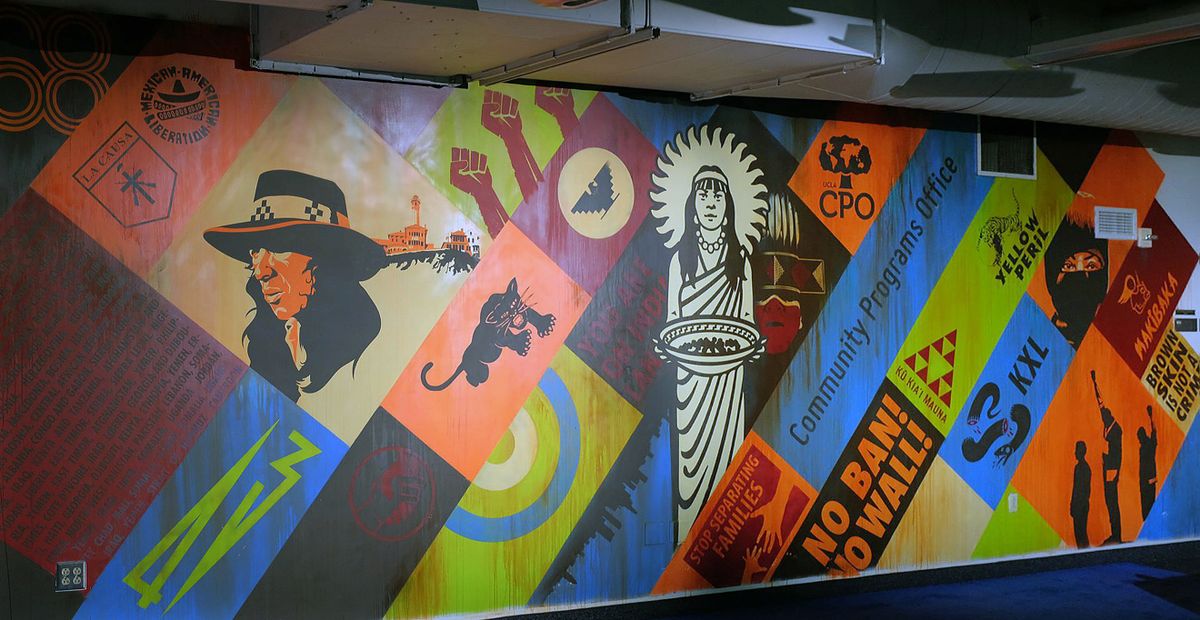 Courtesy of 3B Collective
“50 Years of Resistance” mural in the UCLA Student Activities Center.

The collective created two murals for UCLA. In the Student Activities Center, “50 Years of Resistance” includes iconography from liberation struggles and solidarity movements dating back to 1968. UCLA’s Community Programs Office commissioned the mural, and various student organizations consulted with them on the historical movements that they felt needed to be included. The group also made a mural at the Wilson-Jennings-Bloomfield UCLA Venice Dental Center with abstract geometric shapes in warm oranges and cool blues that reflect the mountains and ocean.

They also recently completed a mural on Whittier Boulevard in East Los Angeles that commemorates the 50th anniversary of the Chicano Moratorium. It includes phrases like “La Raza Unida,” “Brown Power!” and “Ruben Salazar ¡Presente!” Salazar was the city’s leading Latino journalist when he was killed in 1970 by a sheriff’s deputy who shot a tear gas canister into the Silver Dollar Café, located a block from the new mural.

In the column “Who is a Chicano?” published in 1970, Salazar wrote: “A Chicano is a Mexican-American with a non-Anglo image of himself.”

“I’m a Chicano, which already signals a political view. It moves away from race and centers itself around a different experience, a different world view,” Magallanes said.

Diaz says he’s been warned against pigeonholing himself by making his work “too Chicano.”

“Thinking about it now, it was kind of a way for them to tell me, if you want to participate in spaces that matter, then you have to stay away from who you really are,” Diaz said.

Magallanes, too, says he’s been turned away by galleries who have found his art too political.

“I don’t have the privilege to not think about race in my daily life, and so that's woven into the work,” he said. 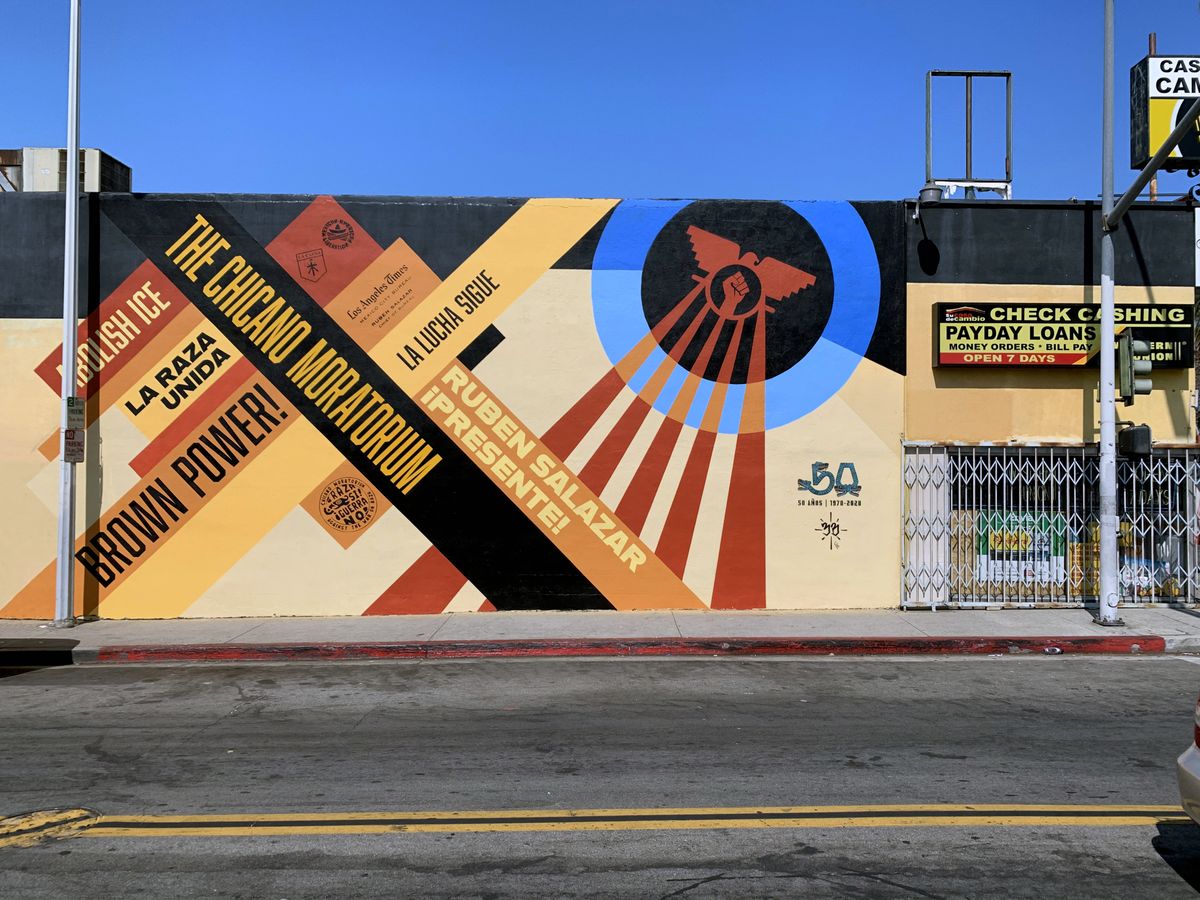 Courtesy of 3B Collective
50th Anniversary of the Chicano Moratorium mural on Whittier Boulevard in East Los Angeles.

Mentorship and giving back

As the oldest member of the crew and the one who is most established, Magallanes has helped guide the careers of younger artists, while emphasizing the importance of giving back to the community.

As he became more established, Magallanes joined the boards of Ryman Arts, Inner City Arts, and Self Help Graphics & Art to support the organizations that helped give him the access and confidence he needed to become a professional artist.

His work often questions the hierarchy and value systems that underlie contemporary art, both in higher education and in the marketplace. For his M.F.A. thesis at UC San Diego, he fully restored a lowrider (a 1951 Chevrolet pickup, the first car his parents purchased as newlyweds) and installed it in the gallery space.

At UCLA, he learned how to situate his work within a larger context and lineage. He saw connections between his gritty, social realist work and the Mexican muralists that were politically outspoken and influenced the post-World War II abstract expressionists.

Times have changed in just the last few years, he says, and now he sees many artists embracing conversations about racism, colorism and privilege.

“The conversation has now caught up to the work that we're doing,” he said.

3B Collective will open its first Los Angeles group exhibition on Oct. 23 at Residency Art Gallery in Inglewood. A work by Magallanes, along with a window display made by the collective, will also be featured in the exhibition “Patriotism in Conflict: Fighting for Country and Comunidad,” which will open on Nov. 4 at LA Plaza de Cultura y Artes.