If you're a lover of jazz and are curious about the west coast jazz scene that once dominated some of L.A.’s most famous nightclubs in the 1960s and 70s, then get ready to be transported back to that era.

Thanks to the UCLA Ethnomusicology Archive, more than 60 recordings of performances by trumpeter, composer and bandleader Don Ellis (1934-1978) were recently made available for your online listening pleasure through the California Light and Sound Collection on the Internet Archive. California Light and Sound is part of the California Audiovisual Preservation Project, which aims to preserve the state’s rich audiovisual heritage by partnering with 127 libraries, archives and museums. 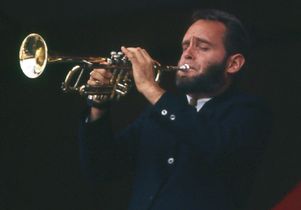 UCLA
Don Ellis at the Monterey Jazz Festival in 1966

Ellis, an enduring presence on L.A.'s Sunset Strip and other avenues where legendary jazz clubs drew in fans from everywhere, won a Grammy in 1972 for best instrumental arrangement for the “Theme from the French Connection.” He is probably best known for his extensive musical experimentation, said Maureen Russell, UCLA ethnomusicology archivist. Ellis’ rhythmic innovations, according to the archivist, came largely as a result of his studies in non-Western musical cultures when he was a graduate student at UCLA’s Institute of Ethnomusicology, which later became the only department of ethnomusicology in the country. The archive is now part of the UCLA Herb Alpert School of Music.

Ellis’ California concert performances, now a click away on the internet, offer listeners a front-row seat at the club scene — Bonesville in Hollywood where he began to gain a significant following in the 1960s; Donte's on Lankershim Boulevard in North Hollywood; the iconic Baked Potato in North Hollywood, which provided live jazz seven nights a week; and the Great American Music Hall, San Francisco’s oldest and grandest nightclub.

Ellis was also a familiar performer on the college circuit, which included a variety of concerts at UCLA.

Here are just some of the audio offerings, curated by Russell, featuring Ellis and his band.

Take a peek at one of the most-watched videos featuring Ellis. "It's very evocative of the California club scene," said Russell. In the opening sequence, the camera captures the vibrance of the Sunset Strip, a destination for crowds streaming into Dino's Lounge, Sneeky Pete's, The Galaxy, The Whisky, Shelly's Manne Hole and Ellis Island.