While Shane Campbell-Staton was working on his dissertation at Harvard in 2013, he walked into a comic book store in Cambridge, Massachusetts, and saw a comic in which Superman fought Muhammad Ali. That was the first comic book he ever bought.

An evolutionary biologist, he spent his days writing about the evolution of a small green lizard that adapted from a warm, sub-tropical environment to the cold winters of Tennessee, North Carolina and Oklahoma. Before going to sleep, he read the comic book as a guilty pleasure.

“Pitting the peak of human performance in Muhammad Ali against the peak of science fiction performance in the Man of Steel, in a ring with gloves on, I had to see how that fight ended,” Campbell-Staton said. (He refuses to spoil the ending by saying who won.)

Campbell-Staton became curious about other comic book universes, and returned to buy a couple of other superhero comics, which he also read before falling asleep. He started to have strange dreams that combined the biology he was thinking about with the comic books he was reading. He had a dream about the Flash – the fastest person in the world whose super speed is coupled with superhuman reflexes – running faster than a bullet. Campbell-Staton woke up thinking about muscle fiber, friction and metabolism — things that fuel a body.

“Science fiction and comic books are a really good way of approaching classic questions in biology from a different angle,” said Campbell-Staton, a UCLA assistant professor of ecology and evolutionary biology, whose research focuses on how reptiles and other animal species adapt to extreme environments, and the physiology, biology and evolution behind that process. “Comic books offer a fantastical look at the same concepts.”

Campbell-Staton started his popular Biology of Superheroes podcast in late 2017, which was a top 20 iTunes science and medicine podcast this January.

This quarter he is teaching a new “Biology of Superheroes” course for juniors and seniors in the life sciences. He uses superheroes such as Batman, Captain America, Black Panther and Wonder Woman, as well as Jurassic Park and zombies, to teach his students the biology of aging, genetics, evolution, genetic engineering, biotechnology, artificial intelligence, the ethics of reviving extinct species, parallel universes, intelligent alien life and how biology shapes modern society. 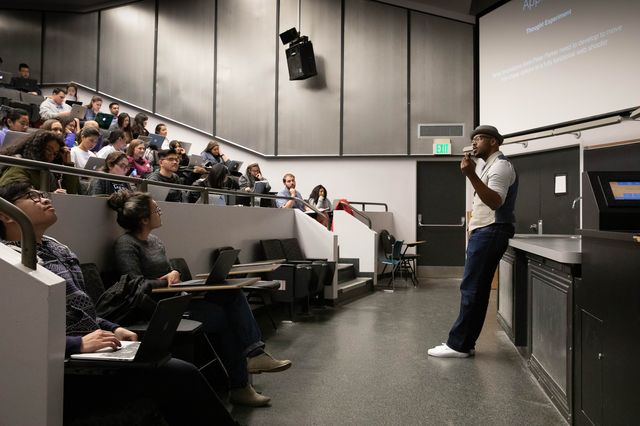 Students read peer-reviewed research journal articles, chapters from science books and comic books. They can create their own science fiction or superhero podcast for their final project, or write a paper or a superhero short novel. Campbell-Staton said he would like to include some of their podcast material on his podcast.

Campbell-Staton said he wants to push students to think about biology in ways they typically would not.

“Regardless of whether these students go into medicine, research, politics, or other fields, my job is to help them sift fact from fiction,” Campbell-Staton said. “If you can sift fact from fiction in Spider-Man, that is a training ground for asking questions about what is true, what is not, and how to tell one from the other when it comes to complex ideas they will confront later in their lives.”

“Usually, we learn the biology of plants and animals. This class is refreshing and cool,” Fayt Sarreal said.

In a recent class session, Campbell-Staton raised a question posed by Harvard biologist Stephen Jay Gould (who died in 2002): If you replay the tape of evolution, will you repeatedly get the same results or different results?

The consensus among the students was the results would be different. One said the six-mile-wide asteroid that crashed to Earth 66 million years ago, wiping out the dinosaurs and approximately 75 percent of the world’s animal and plant species, might miss the Earth in an alternate scenario, and if so, the dinosaurs likely would still roam the Earth.

The 2018 movie, “Spider-Man: Into the Spider-Verse,” addresses this question with alternate universes. The character Peter Parker is Spider-Man in one universe, while Gwen Stacy is Spider-Woman in another universe. The same characters appear in different universes, but as a superhero in one universe, a normal person in a different universe, and a supervillain in another universe. The role of determinism in evolution is a lively, ongoing debate in evolutionary biology — one this movie explores through the lens of the multiverse, Campbell-Staton said. Gould argued that replaying the tape of life repeatedly would yield different results, likely not including humans.

An earlier class session covered whether elite athletes have to be extraordinarily gifted genetically. Campbell-Staton discussed specific gene mutations that influence endurance and muscle strength. He plans to teach the “Biology of Superheroes” each year in winter quarter.

When Campbell-Staton was in high school, he took a memorable course on myths and legends that delved into broader issues. “That always stuck with me as a unique and enjoyable learning experience that forced me to push myself,” he said.