As the crowded Metro Rapid 720 bus heads east on Wilshire Boulevard, the 20 UCLA undergraduates on board are captivated as they pass the marble and travertine Scottish Rite Masonic Temple with its 14-foot tall figures adorning the building’s façade.

Moments later, Teo Ruiz, UCLA distinguished professor of history, starts his first impromptu lesson of the day with a brief discussion about Freemasonry in Los Angeles.

During the 12-mile journey, Ruiz launches into mini-lectures about communities like Century City and Beverly Hills, points out popular local attractions such as Rodeo Drive and the La Brea Tar Pits, and when the bus passes sections of the Berlin Wall, which are part of the collection of the Wende Museum, he tells students these are part of the largest collection of pieces of the wall outside of Germany.

Every fall through the Fiat Lux seminar, “History 19: UCLA Centennial Initiative: UCLA in Los Angeles,” the city becomes the classroom as Ruiz transforms the sights, smells and sounds of Los Angeles into lessons on urban life, architectural eclecticism and social inequality.

“I’ve lived in L.A. my entire life and I didn’t even know part of the Berlin Wall was there. That was pretty crazy!” said Michael Quicho, a first-year biology major and first-time bus rider who added that at first he felt confused and overwhelmed about riding the bus but ultimately the transit experience taught him a valuable skill.

Quicho’s comment is music to the ears of Beserat Hagos, director of Fiat Lux, who said that experiential learning is one of the highlights of the program.

“We break the rules of a traditional college class by giving students access to senior faculty in a small interactive setting with 20 of their peers,” Hagos said. 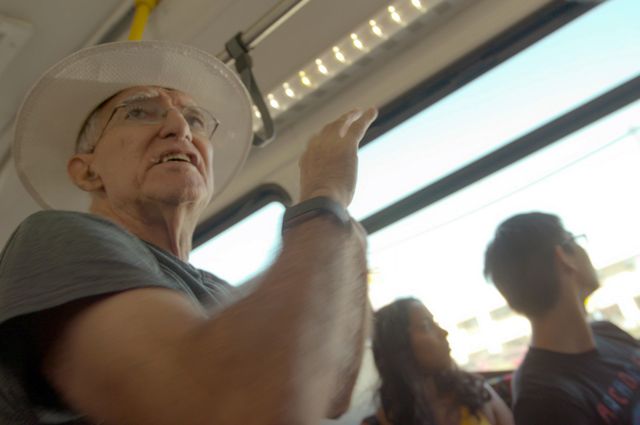 UCLA
UCLA history professor Teo Ruiz leads students on a tour of Los Angeles that starts and ends on a city bus.

As the bus makes its way east past Hancock Park and Koreatown, Ruiz takes the opportunity to point out neighborhoods featuring Los Angeles’ “co-mingling of cultures.”

When the students look out the windows, they see malls with signs in Spanish and Korean. Ruiz tells them that Los Angeles is the second largest “Hispanic City” in the world outside of Mexico City and boasts the largest Korean population in the United States.

An hour after departing Westwood, the bus arrives downtown and the UCLA group piles off at the corner of 6th and San Pedro streets. The five-hour walking tour is about to begin. Ruiz readies them for their day of “discovery” about the city they live in and explains that for many of them it will be the first time seeing first-hand “the segregation and gentrification that occurs in neighborhoods.”

To illustrate this lesson, Ruiz tells students that they are about to head toward the edge of Skid Row.

The students had been told this would be a part of their day and after just a few steps, the sidewalks are impossible to walk because of the tents and shelters set up by the people living there. Led by Ruiz, the students start walking in the street.

Students begin to hear shouts from people occupying the tents.

“You think you’re better than us!” one person yells.

“Don’t drop out! Stay in school or this is where you might end up,” another says.

The students walk only about three blocks and just as suddenly as the tent city appeared, it disappears. Immediately Ruiz shares the history of Skid Row and notes how Los Angeles became the capital of homelessness in the United States.

“Seeing it in person made the homeless epidemic more real and tangible,” said Emily Pham, a first-year psychobiology major from Los Angeles, who said she hadn’t previously given much thought to the city’s homelessness problem.

While most of the students said Skid Row was the most memorable part of their tour, some were ambivalent about going there.

“It felt wrong partly because it does feel invasive walking through people’s homes,” said Stephanie Robles a fourth-year English major and Los Angeles native. “I can see why some people were very defensive and yelling and shouting warnings. [But going there] taught me to check my privilege. I’ve always thought of myself as part of the lower socio-economic spectrum of society, but it makes me re-think all my blessings and privileges and this taught me not to take anything for granted.” 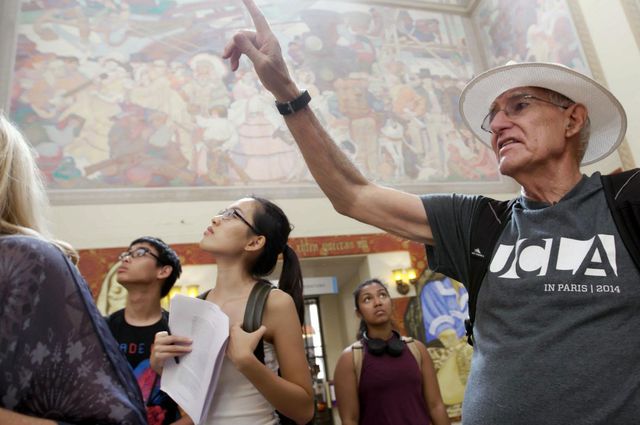 UCLA
Teo Ruiz takes his Fiat Lux students to the Central Library and shares the history of the frescoes.

As an educator, Ruiz said that part of his responsibility is to allow students to not only observe the architecture and culture of the city, but the realities of homelessness, poverty and gentrification as well.

“UCLA is a very isolated campus and I do try to instill a little bit of the sense that even as students they have a social duty to be cognizant of these issues and to try to do something about it,” Ruiz said. “I think that some of the freshmen come with social conscience while others do not. These are themes I review with them again and again, before and after the tour.”

Ruiz’s lesson hit home with Gabriel Garcia, a first-year psychobiology major from Paramount, California. “Skid Row fueled me so much more to try to help people. It made me realize why I am at UCLA, to give back to the community.”

Seeing a different side of Los Angeles

Next Ruiz leads the students at a fast pace north toward Union Station. Along the mile-and-a-half walk the group passes through Little Tokyo and Ruiz points out the Japanese American National Museum.

The group soon arrives at the largest passenger railroad station in the West. With the students gathered around him, Ruiz highlights the building’s history and points out its heterogeneous design, which is comprised of Art Deco, Mission Revival and Streamline Moderne styles.

The next step on Ruiz’s tour is historic Olvera Street. He takes the students through Avila Adobe, which was built in 1818 and the students learn that it’s the oldest standing residence in Los Angeles. 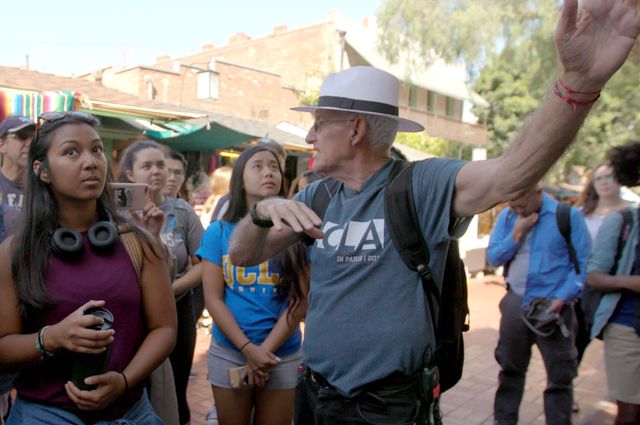 They all continue toward Our Lady Queen of Angels Catholic Church and are soon enveloped by families. Ruiz later explains that the little boys and girls in white were preparing to enter the church to get baptized.

For Garcia, who felt like he missed out on many cultural opportunities growing up, seeing the pueblos, different foods and churches was “the coolest thing ever.”

“I’ve always wanted to feel connected to my culture and my people,” Garcia said. “And here, it felt like as if I was getting a small piece of who I am — a Mexican-American.”

The students are now halfway through the tour and Ruiz has yet to take students to sights like the Cathedral of Our Lady of the Angels, where students sit in on a traditional Catholic wedding performed in Spanish.

They visit iconic downtown locations such as One California Plaza, The Broad art museum, Walt Disney Concert Hall, the Museum of Contemporary Art and the Grand Central Market. After sampling various cuisines at the 100-year-old food emporium, the tour culminates by visiting architectural and historical gems such as the Oviatt Penthouse, the Bradbury Building, the Millennium Biltmore Hotel and the Los Angeles Central Public Library.

After five hours of walking around and learning about the history of Los Angeles, Ruiz still has his energy but he can tell the students are getting tired. The group heads to the nearest 720 bus stop to go back to Westwood.

“Professor Ruiz explains the little niches, nuances and cultural backgrounds on things and it makes you think, ‘Wow! If L.A. has this rich of a culture, what do other places have to offer?’” Garcia said. “And it makes you really see the different parts of what goes into surrounding UCLA and why it’s such a great university.”