Ever since she was little, Joselyne Franco wanted to go into medicine like her mother, who had been a nurse before emigrating from Guatemala. Growing up in a Los Angeles neighborhood where few students went to college and in a family that sometimes couldn’t afford the basics like notebooks, Franco saw her dream as out of reach.

But thanks in part to her middle school and high school teachers at the Robert F. Kennedy UCLA Community School located in Koreatown, Franco, now a UCLA junior, is preparing to take exams for medical school so she can become a doctor.

She’s not RFK UCLA’s only success story. Although 92% of the school’s K-12 students are low income — higher than the statewide and districtwide averages — 86% of its graduates go on to pursue higher education. 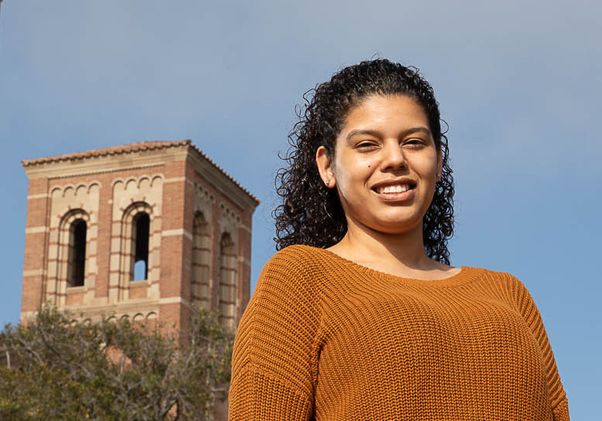 “We provide a place where everyone belongs,” said Karen Hunter Quartz, director of the Center for Community Schooling, which supports and shares the community school’s work, in the UCLA Graduate School of Education and Information Studies. “Young people feel welcome, validated, strong, and ready to take on a society that is stacked against them.”

RFK UCLA was launched in 2009 as a partnership between UCLA and the Los Angeles Unified School District. The school serves Koreatown and Pico-Union, some of the city’s most densely populated neighborhoods. Residents are primarily from Mexico, Central America and South Korea — about two-thirds are foreign-born. RFK UCLA students are 81% Latino, 10% Asian, and 5% Filipino, and 29% are classified as English language learners, according to 2018-19 LAUSD records.

Recognizing education’s critical role in driving social mobility, UCLA determined that a community school was exactly the type of bold venture it should undertake to fulfill its civic responsibility to help narrow the city’s growing equity gap.

“Every young person — no matter her ZIP code or family income — should have the tools she needs to develop her talents and realize her dreams,” Los Angeles Mayor Eric Garcetti said. “The Robert F. Kennedy UCLA Community School has placed countless young Angelenos on the path to a higher education and has made our city even stronger by educating the leaders of today and tomorrow.”

“The Robert F. Kennedy UCLA Community School has placed countless young Angelenos on the path to a higher education and has made our city even stronger by educating the leaders of today and tomorrow.”

That social justice mission was a founding principle of UCLA, stemming from its precursor, the State Normal School, which provided teacher training for Los Angeles schools going back to 1882. Most of the teachers went on to work at schools in Los Angeles, and were in high demand because of the school’s excellent reputation, according to the book, “A History of the Normal School.” The faculty were enthusiastic about the school’s role in improving public education, the history notes. When the Normal School was closed in 1919 and its grounds were transferred to the UC regents, the then-new Southern Branch of the University of California retained its public service mission and goal of bringing education to all, not just the elite.

The UCLA professors and researchers who worked to build RFK UCLA, which is nine miles from Westwood, leveraged their decades of expertise to bring UCLA’s intellectual resources into the city it has called home for a century and, more importantly, obliterate the myth that the children of immigrants can’t go to college.

They did this by transforming a characteristic that has been stereotyped as a disadvantage into a signature resource.

“Our biggest asset is language and culture,” Quartz said. “Community schools build on the strengths of their communities, and one of our biggest strengths is that we have students who speak many languages and who understand the world from the perspective of many cultures.”

With roughly 1,000 students, the RFK UCLA Community School is one of six public schools occupying the former site of the historic Ambassador Hotel. The only admission requirement is living in the neighborhood. UCLA faculty, staff and students provide the community school with more than 16,000 hours annually of mentoring, tutoring, after-school classes and curriculum development each year, and that commitment has paid off.

Right before the community school opened in 2009, only 13% of graduating seniors in the surrounding neighborhoods were enrolled in a four-year public college. In 2017, RFK UCLA’s graduating seniors shattered that statistic when 61% of them were enrolled in a four-year college and a total of 86% went on to some type of post-secondary education. Popular choices each year are Cal State Northridge and Cal State Los Angeles, but in addition to attending UCLA, UC Berkeley and other University of California campuses, graduates have gone to Yale University, Columbia University, Wellesley College and other highly regarded institutions.

“RFK UCLA is a model for other schools because of the learning children are experiencing,” said Roberto Martinez, LAUSD’s district superintendent for the area the community school serves. “Personalization and teaching with heart are key to learning, and that is something you find at RFK UCLA.”

Franco, the UCLA junior, knows better than most that it’s not enough to want to go to college — her older sister started working immediately after high school to earn money for the family, giving up her chance at college to improve Joselyne’s chances of affording college. That sacrifice inspired RFK UCLA’s college counselor, Beth Trinchero, to redouble her support, Franco said.

“I was so scared, because I’m the first in my family to go to college,” Franco said. “I was going for the safety schools, and she was like, ‘No, you deserve UCLA. Apply to UCLA.’”

Everyone has a voice

The personal attention from Trinchero and teachers is a huge part of what makes RFK UCLA special, Franco said. All students have a regular advisory class, in which 20 to 25 students meet with the same teacher three times a week for two years — not to study an academic subject, but to ensure they have a trusted adult in their lives. On-campus college-application pizza parties are a regular feature of senior year, so students — and crucially, their parents — get help decoding the language of application forms and financial aid documents.

Last year, Franco worked on a research project with UCLA faculty to interview families at RFK UCLA in Spanish about their experiences in the school’s Multigenerational After School Arts Program. Families she’s known since childhood saw her returning to the community as a UCLA researcher. She also visits the school to speak to current students about her experiences as a Latina studying science and medicine, showing students from families like hers what they can accomplish. 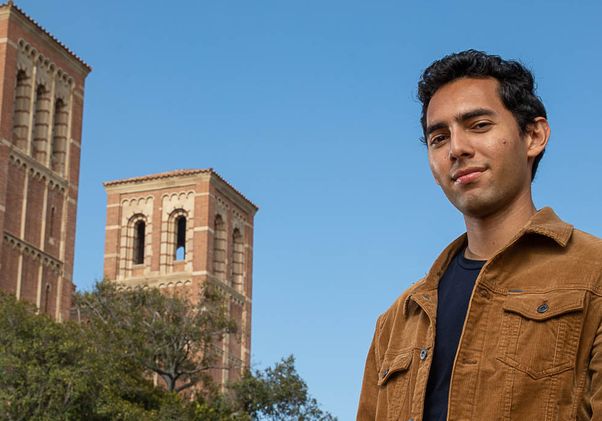 Jeffrey Hayes, a UCLA senior who graduated from the community school, also wants to inspire the next generation of students. An immigrant from Honduras, he plans to become a teacher in part to help other immigrant children see what’s possible.

“I feel it’s important for first-generation students to learn that there are students like them in higher education,” Hayes said, noting that his Spanish teacher, Suyapa Salinas-Hurtt, filled that role for him. “She also migrated from Honduras, and it was very inspiring to me. I thought, ‘Wow, she has this effect on me. I can have that effect on other students.’”

Now, he’s a teaching assistant for the first and second grade classes, which gives him a chance to visit with his old teachers. Hayes said they’re excited to hear that he plans to become a teacher. He recently decided to attend USC for graduate school to become a teacher.

“A lot of them recently went through teacher-education programs,” Hayes said. “Now they’re sharing their personal insights with me, their stories and their tips, so the relationship has evolved from student and teachers to almost colleagues.”

Hayes didn’t always know he was going to college. It wasn’t until he was in 11th grade that he considered the idea seriously, thanks to teachers who sounded a steady drumbeat about college. The school also keeps handy a supply of fee waiver applications to help minimize the barriers related to the SAT and college applications. But what really clinched it for him was an internship he and other students completed at UCLA the summer before their senior year.

“We were in classes with professors, and I worked with Ph.D. students in a lab,” Hayes said. “When I presented my final research at a symposium, I walked out of there feeling very accomplished. I had just finished 11th grade, and I was working with college students doing college work.”

A community school for South L.A.

RFK UCLA’s many student success stories prompted UCLA to form a second community school. In 2017, UCLA partnered with Horace Mann Middle School in South Los Angeles, where only 6% of local residents have four-year college degrees. In 2000, Mann enrolled 1,737 students. By 2016, enrollment had dropped to 330 students, as the number of charter schools within a two-and-a-half-mile radius of the campus jumped to 37.

“This disinvestment in neighborhood public schools serving vulnerable youth is a pattern you see across the nation,” Quartz said. “Mann is a beautiful school that’s been there since 1926. Our UCLA partnership is committed to reimagining Mann as the social center of its neighborhood.” 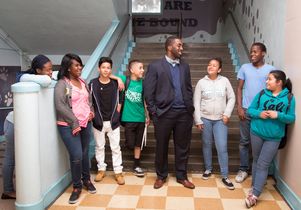 The fall that Mann UCLA opened as a community school, the enrollment declines began to reverse. Now, it has expanded to add ninth and 10th grades, and in fall 2020, its first class of seniors will apply to college.

Brenda Benitez, who started at RFK UCLA as a fourth grader the year the school opened, didn’t realize until she got to Wellesley College in Massachusetts how special some of the community school’s programs were. When her college classmates were discussing the lack of parent participation in high school, she learned how unusual it is that RFK UCLA has an on-campus parent center and that RFK UCLA includes parents in the school’s governing council, which also is made up of students, teachers, administrators, counselors and UCLA staff.

Benitez traces her family’s decision to send her to college all the way back to the sixth grade, when she and her parents attended a bilingual workshop.

“That was really important, because my parents speak only Spanish, and it was important for me that they were able to learn about college, too,” said Benitez, who plans to become a math teacher, like her mentor and math teacher for four years, Maria Nakis. “That was when my family and I realized that college was something we all wanted for me.”

In the end, the school doesn’t measure its success solely by how many students go on to thrive in college. RFK UCLA teachers and leaders strive to instill in their students a willingness to lift each other up, as students have done by returning to the school to help the next generation, becoming a teacher or doctor, or in the big personal sacrifice Franco’s sister made for her. These days, Franco’s dad drives her to UCLA on his way to work, and Franco takes the bus to meet her sister at the office at the end of the day.

“My sister helped support our family so I didn’t have to worry about a job in high school,” Franco said. “My sister helped me do well enough to get into college, and it inspires me to work even harder because I want to give back to her all she gave to me.”