As UCLA's liaison to the UCLA Community School, Sarah Bang was there from the beginning in 2009, helping the revolutionary LAUSD pilot school grow into a hallmark K-12 with a solid reputation for increasing the college-going rate in the Koreatown-Pico-Union area.

Now, like some of the accomplished graduates of the school, Bang has moved on — to the Westwood campus. After winding up her successful tenure at the UCLA Community School, Bang is devoting her energy to a new venture that she has created: UCLA Squared, a support system for the community school’s growing roster of alumni now attending UCLA.

“If the UCLA Community School motto is ‘Where we grow together,’ it shouldn’t stop just because you’ve graduated,” said Bang, who also serves as the director of TIE-INS (Together in Education in Neighboring Schools) Program, also managed by the Graduate School of Education and Information Studies. “UCLA Community School was [created] here. We should be supporting [students] and welcoming them home.” 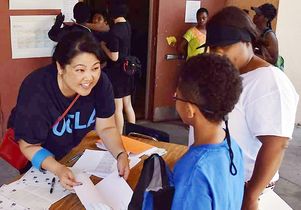 UCLA Squared provides mentoring from faculty and staff, as well as from student peers, for the 16 UCLA undergraduates who came from the UCLA Community School. To support them, there are quarterly gatherings and a Facebook page that Bang oversees. She’s also planning to create a place in Moore Hall where students can study, relax and network.

“First and foremost, we want students to know that … Moore Hall is their home away from home, and introduce them to people within the [Graduate School of Education and Information Studies] so they can come and say hi. We want them to put a face to a name, and then later, when they bump into them in the hallway, they can feel connected. They had that at the community school, so we want them to have it as long as they need it.”

Bang says that peer-to-peer mentoring, which was also an integral part of UCLA Community School culture, flourishes at both the Westwood and Koreatown-Pico-Union campuses.

“Several graduates have gone back to UCLA Community School to help with alumni panels,” she said. “We have a lot of alumni in general that come back for College Kickoff or helping [students] with FAFSA (the application form for financial support). So there’s a lot of desire to come back and give back to the school.

Recently, Bang met with the first community school graduate who transferred to UCLA from a community college. “He told me how he felt really compelled to go back to the neighborhood and the community and help widen this pathway of access to college, to places like UCLA. He said it was his duty to give back. … To have a young person go through the pipeline and look back … you can’t create that.”

Bang, who recently was presented with the 2016 Staff Innovation Award by the graduate school, is a two-time UCLA graduate, having earned a B.A. in sociology and an M.A. from the Teacher Education Program based at UCLA Center X. She briefly taught in an LAUSD school before returning to Center X, a nationally renowned education research center. It’s “pretty incredible when you think about how many departments, people, support staff, directors, teacher coaches and advisers” are there, she said. “The thing about Center X that’s super-impressive is the diversity in the people and programs, but how they’re all really focused on changing the face of education,” Bang said.

Having been at UCLA Community School since its inception in 2009, Bang says that the early days of creating a research-based pilot school in LAUSD was “the scariest, best time in all of our lives.”

“It was like we were doing something really amazing, but we didn’t always know what we were doing,” she recalled, laughing. “The thing that makes the school amazing is its pilot school autonomy” … “that made us unique, like finding our own curriculum or having different ways of assessing [success].

“For me, it was being part of a community — not just with the teachers and students, but with the families — and feeling like a part of something groundbreaking,” noted Bang, “something bigger than me, bigger than all of us, and being able to do it with people who were not just my colleagues, but my friends. That’s like a dream come true — you don’t get that in most jobs.”