UCLA’s Intramural Field reopens June 10 after a six-month makeover transformed it from grass to artificial turf, a change that will save an estimated 6.4 million gallons of water per year.

The 8 acres of turf on the IM Field mark the largest and latest of UCLA’s water-wise, grass-replacement projects, and a key part of the university’s response to California’s historic drought. With a combination of artificial lawn and drought-tolerant landscaping from five large projects, UCLA anticipates saving 11.3 million gallons annually.

“Grass is much more water intensive, and while we don’t want to get rid of all of it, we’re systematically moving away from it for ornamental areas,” said Nurit Katz, UCLA’s chief sustainability officer. “It’s part of our response to the drought, and part of our long-term water action plan.”

A 45,500 square-foot lawn in front of Murphy Hall was recently revamped with drought-tolerant landscaping, and is expected to save 3 million gallons of water annually. Other large projects are coming soon to replace long strips of grass between the campus’ Humanities Building and Powell Library (11,500 square feet), between the IM Field and the soccer field (3,000 square feet) and on Veteran Avenue between Sunset Boulevard and Gayley Avenue (13,000 square feet).

UCLA hopes to save money not only on water, but also by applying for rebates for switching away from lawns, Katz said. 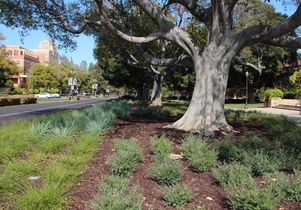 Alison Hewitt/UCLA
Drought-resistant vegetation planted on a median between Murphy Hall and the UCLA School of Law.

Around newer buildings, such as the Court of Sciences Student Center, the Edie & Lew Wasserman Building, and the under-construction Teaching and Learning Center for Health Sciences, drought-tolerant landscaping is baked into the plans from the start. A bioswale outside the molecular sciences building features low-water plants and reduces run-off after a storm. All these initiatives align with UCLA’s Sustainable L.A. Grand Challenge a university-wide research initiative to transition the Los Angeles region to 100 percent renewable energy, 100 percent local water and enhanced ecosystem health by 2050.

“For the campus, we’re focusing most on drought-tolerant landscaping, but depending on the area, artificial turf can be a good option,” Katz said. “Real plants provide an important habitat, but if the area is for people to walk or play on, artificial turf is the better option.”

The university is identifying and evaluating other patches of lawn, especially in strips or other ornamental areas, for future projects.

The Ronald Reagan UCLA Medical Center is also installing turf outside their dining commons, and the UCLA Medical Center, Santa Monica is in the process of replacing a large area with artificial turf, said Teresa Hildebrand, a sustainability coordinator for the UCLA Health System.

On the Hill, a handful of high-traffic patches of lawn that are cast in shadow by the surrounding tall residential buildings have also increasingly become a target for discreet pockets of artificial turf, said Emma Sorrell, the sustainability manager for UCLA Housing and Hospitality Services. With little sun and lots of treading, the grass took a beating — now, where turf has already been installed the area stays green and saves water, she said.

Drought-tolerant plants are also sprouting up on the Hill, including alongside the Northwest Campus Auditorium and in front of the Courtside Residential Suites, and in a project planned for this summer and fall, behind Covel dining hall. An additional 25,300 square feet of lawn were replaced with artificial turf at the off-campus University Apartments, with anticipated savings of 630,000 gallons annually, Sorrell said. 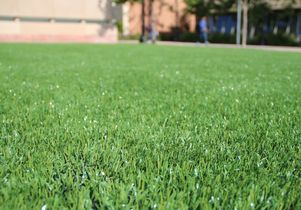 The new IM field not only saves water, but also gives students more playing time, said Rich Mylin, the director of recreation sports venues and event operations for UCLA Recreation. The grass took such a pounding from recreation activities and weather that the field closed for up to four months every year to regrow the lawn, he explained. The new field, using exclusively American-sourced materials, and selected after being thoroughly studied for safety, can remain open year-round, Mylin said.

“With real grass, the field was only green and perfect for a few weeks at a time before getting choppy,” Mylin said. “The artificial turf is always uniform, and we’re really proud of it. We opened half of the field early to some of our IM teams and club sports, and we’ve gotten positive feedback.”

And although even artificial turf can require watering to combat excessive heat, UCLA Recreation predicts that they’ll need to water the new field only under rare and extreme circumstances, Mylin said.

UCLA’s water conservation efforts predate the drought, and the campus has already reduced its water use by 7.6 percent per capita since 2000, almost halfway to the 2020 target of reducing per capita potable water use by 20 percent. That’s more than 100 million gallons annual savings so far.