For Sidrah Shah, attending Sunday’s UCLA and Westwood Village Block Party was all she could have hoped for.

The just-moved-in freshman had been worried that in-person events would be moved online, making it difficult to find community at UCLA.

“I lost my entire senior year: prom, graduation and everything,” said Shah, who joined several thousand students for the Westwood Wander. The walk down from the Hill through campus and then south to Westwood Village for the block party is an important UCLA tradition that helps new Bruins connect to the nearby neighborhood filled with restaurants, stores and movie theaters.

In what felt similar to a first day of summer camp, students closely followed as their resident assistants led them in their dozens of groups as they wound through the still-unfamiliar territory of campus. Most students (Shah included) stuck even closer to their roommates as they advanced toward the village for an evening of mingling, music, entertainment and food.

With the low buzz of voices and smiles peeking out from under the edges of their masks, the excitement in the air was thick.

The block party is one of the headline events of True Bruin Welcome, a week-plus tradition of activities and events for new students to get acclimated to campus. This year’s block party was especially meaningful as first- and second-year students, as well as transfers, experienced a large-scale, UCLA in-person event for the first time.

To heighten the anticipation for Westwood-bound students, Bruin Walk was lined with activity. As the students walked between Pauley Pavilion and the intramural field, there were bubbles, cheerleaders, the Spirit Squad and Joe and Josephine Bruin. Then members of the marching band. And to make sure no one went astray, sign spinners twirled their giant blue and yellow arrows over their heads pointing people toward Westwood Village. Their high-speed moves looked as much like dancing as assistance directing people where to go.

In the glow of the late afternoon sun, Weilen Tang, an aerospace engineering major, walked a steady pace with his group.

“It will be nice to meet people,” the freshman said. “I also have not gone to Westwood Village so this is my introduction.”

Once students turned the corner of Le Conte Avenue the block party came into view, as did something else. A notably long line for Diddy Riese, the coveted cookie and ice cream shop.

Sami Siddiqui, a molecular cell and developmental biology major, had finally gotten his ice cream after standing in line for 30 minutes. “Honestly, I didn’t think $3.50 in Los Angeles would get you one of the best ice cream sundaes in town. It’s worth a try.”

Across from Diddy Riese, organizers set up a roller rink near the Ferris wheel, which was at the intersection of Broxton and Weyburn. Heading south on Broxton, the smell of food from restaurants beckoned everyone into eateries, where doors were swung open to receive the groups of students. There was also a DJ booth and dance floor.

Some campus and community groups and vendors set up tables radiating from the intersection to introduce themselves to students. Among the most popular was the table handing out free movie posters, which some students stood in line for up to an hour for.

One of those students was Ashley Ma, who picked a poster for the Marvel film “The Eternals.” Will the new poster adorn the walls in her new residence hall room?

Ma laughed with her roommate. “If we have space for it,” she said. 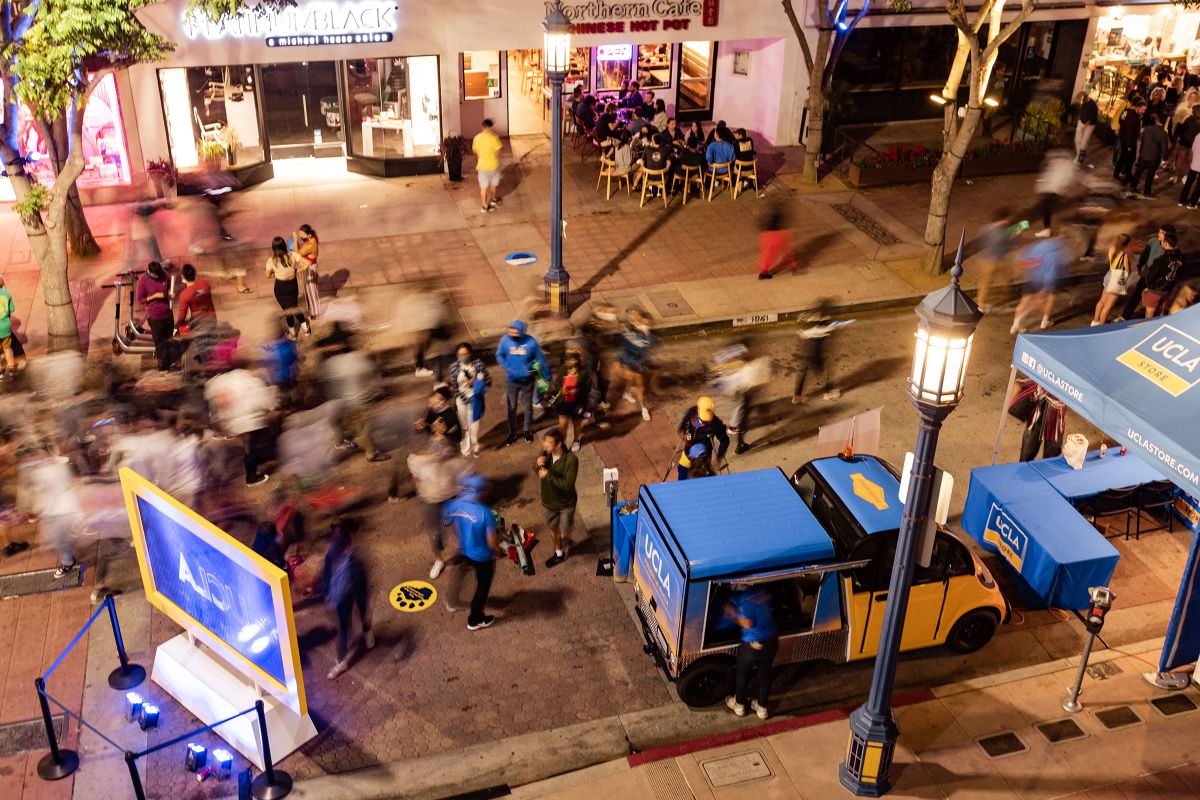 UCLA
The Bruin Buggy and selfie station were magnets for students looking to pick up free UCLA swag and capture their memories of the the block party.

By 6 p.m., the once discernible groups of students from different residence halls had turned into a larger crowd, lining up for swag at the UCLA Bookstore tent or at the Bruin Buggy, a new UCLA popup offering campus coupons and pins.

“I am having lots of fun. I’ve been here for two days and it’s felt like I’ve been here a month. It’s awesome,” said Amy Leang, a microbiology, immunology and molecular genetics major, who clung to all her swag as her eyes flashed back and forth, keeping her two roommates within view.

Their focus was quickly diverted to a blue and gold selfie station at the south end of the block, where students lined up with one another to take photos. Standing in front of the sign and decked out in UCLA gear was Sami Brielle, a second-year student making short-form videos.

“This is officially my first time on campus as an official UCLA student,” said Brielle as she finished interviewing another student for her channel. “I’m having fun today.”

A little up the street and marking the south entrance of block party stood another DJ booth and dance floor, as well as more signs for the event that spelled out the safety precautions. To enter, students had to complete a daily symptom monitoring survey, wear a mask and check in using a special QR code.

The combination of safety and fun made Shah confident that she’ll find her Bruin community because campus is equipped to host the hundreds of welcome-to-UCLA events and open houses planned for the weeks ahead.

“Since they’re taking into account safety as well, I feel much more comfortable,” Shah said. “It’s very heart-warming and comforting.”