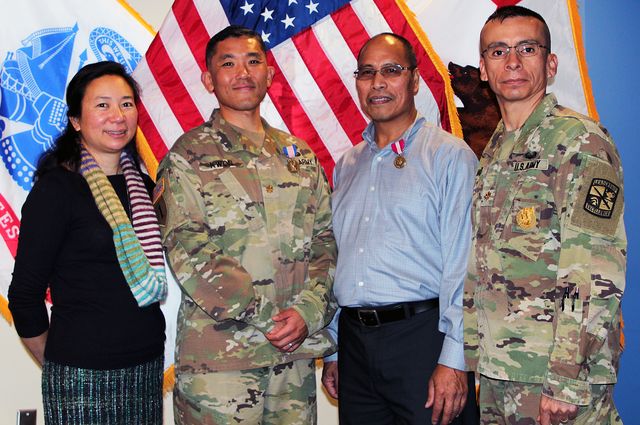 Four members of the UCLA community were honored today for their heroic actions to save two people from a horrific crash on the 405 freeway last April.

On April 30, 2018, a group of staff and faculty from UCLA’s ROTC program were driving south toward the UCLA campus when they witnessed a northbound big rig crash into the center median. The accident, which sent debris flying into the southbound lanes, left the truck overturned with a crumpled Honda wedged between it and the median. As seconds passed amid smoke and flames, the group directed traffic, collected water bottles and fire extinguishers, and secured the safety of both the truck driver and the individual trapped in the car.

“It’s pretty amazing when you’ve got people within our own society who will step up and put their lives at risk for others,” said Maj. Gen. John Evans, commander of U.S. Army Cadet Command. “In a society that continues to be fractious and divided sometimes, it’s great to see that when Americans need help from one another they come together and they help each other out.”

At a ceremony held at the J.D. Morgan Center on campus, Evans presented Maj. Steve Kwon, chair of UCLA’s ROTC program, with the Soldier’s Medal, the Army’s highest honor given for heroism that occurs outside of the scope of battle.

Maj. Tyrone Vargas, an Army ROTC assistant adjunct professor, was recognized for his contributions with an Army Commendation Medal. 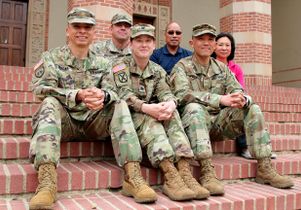 “Nobody does these things looking to get a medal,” Vargas said. “I guess any one of us in the position would have done the same. I’m just glad to be with a group of people that were willing to work together.”

Romeo Miguel, the recruiting operations officer, was presented with the Civilian Superior Service Award and Victoria Sanelli, manager of UCLA Army ROTC, was honored with a letter of commendation.

“It was a team effort and we were able to rescue an individual and we are extremely thankful and extremely humbled by this experience,” Kwon said to the audience filled with members of the armed forces, ROTC members, UC police officers and others. “We stand before you not as heroes, but equals... We don’t have to look far to find that there are heroes everywhere in this room.”

Lt. Col. Shannon Stambersky, the department’s former chair, and Sgt. 1st Class Rhu Maggio, former ROTC military science instructor, were also involved with the rescue efforts on April 30, and will be recognized for their contributions. Maggio, who now works at Fort Gordon, Georgia, will be presented with the Soldier’s Medal. Stambersky, who now works at the Pentagon, will receive an Army Commendation Medal.