On the second Saturday of every month, about a dozen students in UCLA School of Law’s Reentry Legal Clinic gather early in the morning to travel from Westwood to Watts. They come prepared but leave their books behind. There will be no school credit for them to earn in the important work ahead.

When they arrive at a space rented by the community-based nonprofit organization A New Way of Life Rentry Project, the students conduct a brief training session with their coworkers for the day, fresh volunteers from other law schools, colleges and even corporate law firms. Then they meet their clients, who include many of Los Angeles’ most challenged individuals: people who have served criminal penalties but still struggle to find stable jobs, education or housing because their convictions appear in background checks run by employers, landlords, loan providers or licensing agencies.

For each case, the students comb through piles of documents, discuss the client’s improvement and prepare a narrative report that attorneys from A New Way of Life, or ANWOL, will eventually present to a judge as part of a so-called expungement petition. In doing so, the students sharpen their skills as interviewers, counselors and legal writers, all while building cases for their clients’ criminal records to be wiped clean — the most consequential step in moving forward with their lives.

For this vital work, the Los Angeles County Board of Supervisors honored the Reentry Legal Clinic on Oct. 9 by passing a resolution commending its decade of public service.

Founded 10 years ago by UCLA Law’s Critical Race Studies program and ANWOL, the clinic is the largest in the law school’s student-run El Centro Legal Clinics network. The extent of its impact is remarkable. In one decade, the clinic has trained 400-plus volunteers, helped more than 2,800 individuals, filed more than 8,400 post-conviction relief petitions and won successful outcomes in 85 percent of those cases. In addition, the clinic has assisted more than 120 people in obtaining occupational licenses for careers including nursing and security, and contributed to efforts to reform post-conviction relief and enforce background-check laws.

“It’s a great experience if you’re attempting to get into this work in the future or if you’re interested in criminal defense,” said Daniel Silberman, who will graduate from UCLA Law in May and is one of the clinic’s co-chairs. “Even folks who are interested in becoming prosecutors have come out to help with the clinic. It’s a super powerful perspective for them to have.” 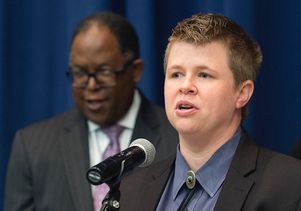 Several UCLA Law graduates who participated in the clinic have gone on to prominent positions as public interest attorneys, including many in ANWOL’s in-house legal department.

CT Turney-Lewis, ANWOL’s supervising staff attorney who graduated from UCLA Law in 2011, got involved in the clinic as a first-year student at UCLA Law. “I never miss the opportunity to tell our new student volunteers that I started out exactly where they are: roughly three weeks into law school, sitting across from a client who assumed I knew what I was doing,” Turney-Lewis said.

“I grew up in a largely white suburb of Ohio, and I was very out of touch with issues involving race when I was younger,” adds Turney-Lewis, who joined the clinic because of an interest in critical race studies. “The criminal justice system disproportionately convicts poor people and people of color for things that, when done by affluent and white people, are viewed differently: as a cry for help, a youthful indiscretion or something that merits a stern talking to. I work every day helping people get expungements for things that I and people I grew up with did but would never have been arrested for.”

That vivid glimpse into how the system impacts people in resource-poor neighborhoods, as well as the chance for students to help turn lives around, makes the clinic a triumph for all involved.

“The Reentry Legal Clinic is UCLA Law at its absolute best — students take it upon themselves to organize a substantial service to the greater community, putting in hours of pro bono work to help others when they could be studying or relaxing,” said Joannna Schwartz, UCLA Law professor and vice dean and faculty adviser for the El Centro legal clinics. “It was so gratifying that the board of supervisors recognized the group which, with deep thanks to the Critical Race Studies program and A New Way of Life, has spent a decade making a real difference in the city and in the lives of so many.”

A few Saturdays ago, reentry clinic students took a break from studying or writing the first major papers for their legal research and writing classes to head back to South Los Angeles. Along the way, Silberman stopped at Winchell’s to pick up plenty of coffee and donuts — fuel enough for his dedicated crew of Bruins, as well as for some of the clients, and the clients’ kids, whom they would soon meet.

He hoped to connect with clients like one of his very first, a man who had been struggling to find work as a security guard because employers were deterred by his criminal record. After they met at the clinic and a judge expunged the man’s record based in part on Silberman’s efforts, the pair remained in touch and eventually shared a special cheer when the man landed a part as an extra on the hit HBO series “Westworld” — a virtually impossible turn of events only a short time earlier.

“The best part is getting to ask clients: ‘What are the best things about yourself?’” Silberman says. “That’s the really cool part — to have people who have been told for a long portion of their lives, ‘You’re a screw-up.’ Instead, we sit there and say, ‘No, no, no. Let’s do this the other way around.’”