UCLA celebrated the official grand opening this week of the UCLA Meyer and Renee Luskin Conference Center, built in the heart of campus to bring people together to share knowledge and address some of society’s most vexing problems.

The Luskin Conference Center, which has been open since August, provides new meeting space for members of the campus community to host academic summits and events. The center features 25,000 square feet of conference space, 254 guest rooms, a restaurant and underground parking to accommodate 125 vehicles.

“The UCLA Meyer and Renee Luskin Conference Center is a place built expressly for leading experts in their respective fields to gather and create the future,” Chancellor Gene Block said. “The conference center will be an incubator for fresh thinking, deliberation and discovery that will lead to scientific and social progress. It will also serve as a gateway for first-time visitors to experience our campus and its vibrant community.” 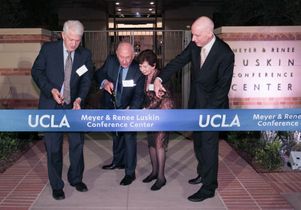 “Meyer and Renee, we’re deeply grateful for your visionary leadership and your unwavering dedication to UCLA. You’ve been extraordinary friends of this institution,” Block said at the event. “Your leadership in philanthropy helped us fund this dazzling center and brought us to this day.”

The Luskin Center’s role in fostering engagement among students, faculty members, government leaders, members of the Los Angeles community and visitors from around the world in the spirit of UCLA’s mission will make the facility a critical piece of UCLA’s future, Block explained.

That spirit was present Friday as guests came together in the center’s grand ballroom to hear UCLA political science professors Lynn Vavreck and Matt Barreto, who is also a professor of Chican and Chicano studies, discuss the significance of the 2016 presidential campaign for America. The lively conversation was moderated by former CNN political analyst Bill Schneider, now a visiting professor in the UCLA Department of Communication Studies.

The participants commented on key issues that have surfaced in the election, including the sharp divisiveness between those identifying as Democrats and Republicans, the expectations people have of their elected representatives, the accuracy of polls and the question of whether social media has changed or “coarsened the tone” of American politics.

At the forefront of the stand-off between Hillary Clinton and Donald Trump are issues of immigration and race relations and questions of how we will move forward as a country, said Vavreck.

“This is the issue of our time right now, the way the Cold War was the issue … in the ’50s and ’60s,” she said. “It won’t be forever, but it will be for this [election] cycle, and maybe for one or two more that, as a country, we have to have this conversation about community and inclusiveness. It’s more uncomfortable because of the way that Donald Trump is doing it, but it was probably going to happen in some way.”

In a second on-stage discussion, two more UCLA experts — Vivian Sobchack, a UCLA alumna, professor emerita in the UCLA School of Theater, Film and Television, and a leading authority on science fiction in film, and Andrea Ghez, a renowned astronomer and professor in UCLA’s Department of Physics and Astronomy — talked about where society is in its quest to better understand our planetary universe and how our fascination with space is expressed through literature and film. UCLA alumnus Saul Gonzalez, an Emmy award-winning producer and correspondent for KCRW-FM, served as moderator.

“There’s so much we didn’t know 20 years ago,“ said Ghez, adding that much of what was taught about the universe back then was wrong, based on what we know today. “Back then, we thought the solar system was it. Today, we know about 3,000 other planets that are out there in our galaxy.”

Ghez said that much of what we know now about the universe will be further eclipsed by what we will learn in the decades to come. With every discovery comes the realization that there is still so much more we can learn. “We live in the Golden Age of astronomy right now, and it’s because technology is driving it," she said. "There are so many new ways of exploring and understanding the universe.”

Ghez and Sobchack also discussed why science fiction tends to be bleak in tone, whether humans might one day reside on other planets and whether we will ever discover advanced extraterrestrial life.

► Watch the sessions on Facebook: 2016 Election and Future of space.

The Luskin celebration also featured an opportunity for guests to learn more about UCLA’s research expertise in an enlightening science-fair style environment. Professor Dennis Hong’s RoMeLa (Robotics and Mechanisms Laboratory) showed off its break-dancing robots and THOR, a robot designed to be deployed in emergency and rescue situations. In another room, guests played with creating mountains and lakes in UCLA’s virtual reality sandbox, an augmented reality teaching tool that simulates topography.

By visiting different exhibits, visitors learned about professor Darnell Hunt’s groundbreaking research into the state of diversity in Hollywood; the UCLA Game Lab, where students learn how to use game development to explore social and political issues; professors Victoria Vesna’s and Mark Cohen’s interactive art and science exhibit that involves the reading and visualization of people’s brain activity as they are immersed in a space filled with sound, light and color; and the UCLA Healthy Campus Initiative, an effort that promotes complete mind and body health and wellness throughout UCLA.

The seven-story, 295,000-square-foot Luskin Conference Center is one of just a handful of university-operated, on-campus conference centers in the United States.

On Oct. 18-20, the inaugural UCLA College Luskin Endowment Symposium: Earth Now: Earth 2050 will feature as its keynote speaker Kathryn D. Sullivan, undersecretary of the National Oceanic and Atmospheric Administration and the first woman to walk in space.

Guest rooms at the Luskin Center are reserved exclusively for those attending or participating in events and conferences held at the center; those doing business with UCLA entities; and UC faculty, students, staff and other university affiliates. Those booking venue space must demonstrate that their event has academic or educational value and is aligned with the university’s mission of education, research and service.

No tuition dollars or state funding were used to construct the conference center. The self-sustaining facility was privately funded, utilizing $40 million from a previously announced gift from Meyer and Renee Luskin, both of whom are UCLA graduates, and $112 million in financing to be paid off over time.

Take a brief video tour of the new conference center below.