Caley Versfelt is many things, but timid certainly isn’t on that list. That hasn’t always been the case for the 24-year-old who’s been designated a 2015 Special Olympics World Games global messenger. She’s gained a lot of self-confidence and developed important skills through Special Olympics and several UCLA programs geared to people with intellectual and developmental disabilities.

“Special Olympics helped me to overcome my shyness and be positive, and not be afraid to try new things,” said the Manhattan Beach resident, who worked the blue carpet Saturday evening at a pre-party for the world games opening ceremonies, held at the Los Angeles Memorial Coliseum. Like a pro, she interviewed some of the event’s celebrity guests, including Rafer Johnson, Special Olympics co-founder, Olympic gold medalist and a UCLA alumnus; actor Ben Vereen; and NBA Hall of Famers James Worthy and Dikembe Mutombo.

“Without UCLA and Special Olympics, Caley would not be who she is today,” said Shail Versfelt, Caley’s mother.

Versfelt’s job as a global messenger is to spread excitement about the much-anticipated games, now being held at UCLA and other venues through Aug. 2, and to be an advocate for people with intellectual disabilities through speaking engagements, media interviews and attendance at special events. For today and tomorrow she will serve as on-camera talent for interviews at UCLA. 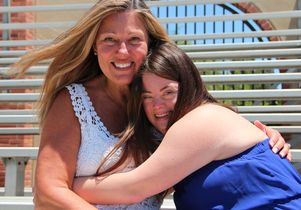 Rebecca Kendall/UCLA
Shail Versfelt, shown with Caley, credits Special Olympics and UCLA with helping her daughter become the confident woman she is today.

Versfelt was born with Down syndrome. As a 7-month-old infant, she was enrolled in an early intervention program at UCLA until she was 3. When she was 9, she joined Special Olympics Southern California and became a medal-winning swimmer and basketball player in regional games.

“Caley is an amazing spokesperson for people with intellectual disabilities. ... Her compassion and love of every person shines through all that she says and does,” said Shannon Mora, the foundation’s co-founder and vice president. Shannon and Jim Mora, who is head coach for UCLA’s football team, have been involved with Special Olympics for decades.

Together, the Moras and Caley Versfelt have been supporting the 2015 Host Town Manhattan Beach program, with the Moras serving as honorary co-chairs of the citywide effort to host athletes from Hungary and Nepal before the games started. Caley, who welcomed the Manhattan Beach guests to her hometown, was named honorary mayor of Manhattan Beach for the duration of the Special Olympics World Games.

Versfelt’s advocacy goes beyond the sports arena. On July 24 on the UCLA campus, she participated in discussions with Eric Latham, executive director of Pathway at UCLA Extension; Ulla Schmidt, the vice president of the German parliament; and members of her delegation.

Schmidt and her colleagues are interested in designing a college program, modeled after Pathway at UCLA Extension, for students with intellectual disabilities in Germany.

Versfelt shared her positive experience with them as one of the first graduates of Pathway Generation NeXt, a one-year transitional program at UCLA that provides a residential college experience for students with intellectual and other disabilities. The program offers academic programs, life skills training, internship opportunities and participation in community service projects.

The Pathway alumna voiced her support for working to improve the lives of people with disabilities. “We are alike, with a desire for independence, to build self-confidence, develop friendships, have success in college and build a career,” she told the delegation. ”We want to be treated with dignity and be included.”

Shail Versfelt said that Generation NeXt helped her daughter gain the skills and self-esteem needed to take on her role with Special Olympics. As a Generation NeXt student, Caley joined the UCLA student-run Hooligan Theater company and had a part in a production of “How to Succeed in Business without Really Trying.” Having already been an extra on the television show “Glee” and in the short film “Guest Room,” she said she would like to act professionally one day.

Additionally, Caley’s participated in UCLA’s Project SEARCH, a program for adults with developmental disabilities, which led her to a full-time internship at the Ronald Reagan UCLA Medical Center, and California Employment Consortium for Youth and Young Adults with Intellectual and Developmental Disabilities at UCLA’s Tarjan Center, which recommends ideas to the state to help people with disabilities pursue higher education and employment.

“All of this gave me confidence that I can be successful in a work environment,” Caley said.

“What I like most is that Caley has the conviction that she can do anything, and that’s because UCLA has believed in her. ... Special Olympics believed she could do things,” said Shail Versfelt. “Rather than look at disabilities, they looked at abilities first. That’s huge in impacting our kids’ lives.”