To share his favorite subject broadly, Vinokur leads a dual life as complex as some of the enzymes he is studying. When he’s not looking deep into the structural analysis of mevalonate-3-kinase in the quiet of his lab, he’s a nationally known chemist-meets-hip-hop dancer named the Dancing Scientist, running a one-man-show that automatically converts every stage into a classroom for zany science experiments.

With a mission to infuse a “wow” factor into the teaching of science, Vinokur has entertained TV audiences with lessons on acids and bases on the daytime talk show circuit, with stops on ABC’s “The View” and NBC’s “Today Show,” among others.

By dehydrating sugar with sulfuric acid and creating a tower of pitch black goo or bursting lead pipes open with only a few tablespoonfuls of water, Vinokur takes audiences far beyond their middle-school experiments in basic chemistry.

When he isn’t configuring a flamethrower out of flour and a plastic tube on national television, Vinokur is bringing his one-man stand to counter boredom in science education to elementary schools across the country — he’s performed at 250 schools on three nationwide tours so far. 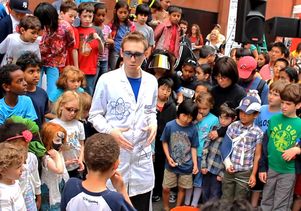 “You really can influence kids,” said Vinokur, who is careful to warn students not to try some of these experiments on their own. “They come up to me after the show and tell me how much they love science … I hope that one out of 1,000 of these kids will become a scientist because of my show.”

He enlivens mundane lessons on acids and bases by using solutions that change color; in his hands, the dull purple of cabbage juices becomes a highlighter pink with a splash of acidic lemon juice. The higher up the pH scale, the louder the colors. Explosions triggered by chemical reactions set Vinokur in hip-hop motion.

But do dancing and chemistry truly mix well together? Vinokur believes so. It’s really all about showing young people that science is awesome and can be done by just-as-awesome scientists, he explained.

“I’m trying to dispel a negative stereotype about scientists. If you ask a kid to draw a scientist, they’ll draw an old guy with crazy white hair,” he said. “That discourages kids from being interested in science. I’m trying to disprove that — by being a normal person who can dance.”

Vinokur began turning science education into a performance art when he was an undergraduate at the University of Wisconsin-Madison. He found his first audiences in libraries.

But he swiftly left the stacks for the national spotlight when he competed for a spot on “America’s Got Talent” and landed in the top 100 out of 70,000 contestants. With a performance on that show and more than 20 million YouTube cumulative views of his hip-hop dance videos and experiments, Vinokur decided it was time to take the Dancing Scientist on the road to schools around the country and eventually daytime TV shows.

Donning his signature bejeweled lab coat and blessed with charisma to spare, Vinokur can fill a five-minute segment in a TV show or a 50-minute time slot at schools.

“When I get only four minutes on TV, it feels more like a magic show,” he said. At schools, he has time to explain chemical reactions, making sure that a proper science lesson isn’t eclipsed by thumping rap beats.

While Vinokur has to occasionally cram 11 performances into a single week, he is still very much a real Ph.D. candidate. He is currently researching the 3-D structures of enzymes with the goal of redesigning them to produce biofuels.

Vinokur said he is grateful for UCLA’s support in allowing him to pursue both his research — he publishes scientific papers as well — and a life on stage.

The Dancing Scientist said the Department of Chemistry and Biochemistry, as well as his advisor, has shown support for his efforts to make science fun. “The department often puts me in the departmental newsletter,” Vinokur said. “I wouldn’t be able to take a week off to perform if I wasn’t supported by faculty.”

With a flourishing fan base and a growing YouTube presence, it’s clear to him that the dancing won’t stop after he gets the degree. Vinokur does someday hope to be a professor and researcher while keeping the Dancing Scientist hip-hopping around the country.

“I love research and discovery — being the first person to discover something. But I also love inspiring and teaching kids. With basic research, chances are my research won’t produce anything until someone else builds on it. But with the kids, within an hour they’re giving me high fives, and I’m seeing the impact.”