While Americans prepare to celebrate Independence Day this weekend, 68 UCLA political science students are traveling through Europe and witnessing first-hand the dramatic results of Britain’s referendum to leave the European Union.

The trip began in London the week of June 20 where classes focused on the history and function of Britain’s parliamentary system.

The students and professors quickly realized the impending Brexit vote would dominate conversation and add perspective to all their activities, whether that was attending class, or a play, or watching soccer in a local pub. 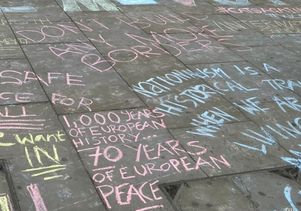 Barry O’Neill/UCLA
These chalk messages written by opponents of the Brexit were ultimately unpersuasive.

“What made this especially relevant to the students’ experience was that a major feature of the vote was the deep and deeply disturbing generational divide,” he said. “Young British people were overwhelmingly pro ‘remain.’ They are very multi-cultural in perspective, often have friends and acquaintances from a wide variety of cultures, both European and the rest of the world and, perhaps most importantly, they see their economic and professional futures as Europeans.”

UCLA students and professors witnessed and interacted with Londoners at a “Remain” rally and after the June 23 vote were first-hand witnesses to the immediate financial repercussions in the city and public tension around what will happen to Britons working in other E.U. countries.

The second stop on the multi-national course was in Brussels where the students attended a lecture from an E.U. official that outlined the European reaction to Brexit.

In the coming weeks, the students travel to Amsterdam where they will study the political system of The Netherlands and delve into such topics as the sustainability of the Netherlands welfare state and rising anti-immigrant sentiments.  They end their trip on Paris, after a focus on the history of political instability in France from 1789 to the present, and the cultural factors that help explain France’s political process.