The first time UCLA student Nick Gunnett visited the Veterans Garden on the VA campus near the university, his friends had convinced him to tag along for a monthly get-together and garden cleanup.

After a couple of hours gardening with veterans from both campuses, Gunnett was hooked. That was in spring. Now, the Navy veteran is one of the organizers.

Gunnett knew that UCLA’s student veterans hosted a monthly volunteer project to revive the abandoned garden, but he had no idea how much the project would speak to him. Between weeding, constructing planter beds, and harvesting vegetables, he described it as a great opportunity to build things, relax, and socialize with veterans from different backgrounds.

“For a couple of hours each week, I’m forced away from my phone and my computer and my textbooks, and I’m just there, out in the open,” Gunnett said. “Some of the VA vets are transitioning from homelessness, or treatment for serious illness, but they don’t seem like a bunch of sick people or homeless people. The garden, it’s an equalizer, it’s a link, it’s a place we can meet. It gives people a break from their problems, but not a break to do nothing. We’re creating.”

The project started in January 2017 when the Student Veterans of America had their national conference in Southern California. They partnered with UCLA and the west L.A. branch of the Veterans Affairs of Greater Los Angeles Healthcare System for a one-day volunteer project to spruce up the overgrown garden, said Emily Ives, director of UCLA’s Veteran Resource Center.

“Our students said, ‘This can’t be a one-time deal, we have to continue,’” Ives said. “They wanted to make this a place where veterans can have a community, and where they can come for picnics, reflection, gardening and other wellness activities.” 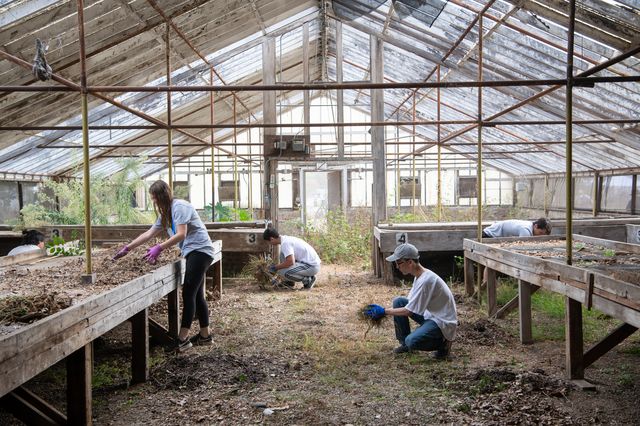 Michael Baker/UCLA
For UCLA’s 10th Volunteer Day, hundreds of volunteers came to the Veterans Garden at the nearby Veteran Affairs campus.

For almost two years, UCLA’s student veterans have volunteered at the 15-acre Veterans Garden once a month, with organizers going nearly every week, beating back the weeds and coordinating with the VA on long-term ideas. The volunteers began with frequent support from the VA and UCLA groups like the Veteran Resource Center, the campus’s chapter of Student Veterans of America, and UCLA Campus Life.

With the garden overlooking the Jackie Robinson Stadium, which is used by the UCLA baseball team and veterans, the monthly projects often end with lunch and a free game.

“With these monthly work parties, our student vets are coming together with veterans at the VA,” said Mick Deluca, assistant vice chancellor of campus life. “There have been some tear-jerking connections between them, and they’re figuratively and literally bringing back to life a garden that had completely died.”

Today, UCLA’s student veterans went to the garden again for their monthly volunteer project and lunch. This time, they’re also partnering with UCLA’s transfer students, who organized a donation drive and made hundreds of hygiene kits to provide to veterans living in transitional housing at the VA and to homeless veterans, Ives said.

The hygiene kit donations were managed by Jessica Kim, the transfer student representative in UCLA’s Undergraduate Students Association Council, which is helping fund Friday’s work. Kim is also a transfer student and, as the daughter of a veteran, a member of the Veteran Resource Center where Gunnett and Ives work.

“I’d say a majority of veterans are transfers, too, so I’m really excited to increase the connection between the two groups of students,” Kim said. The donation drive to help homeless veterans is a good fit for transfers, she added. “We had our own careers and life stories that maybe didn’t emphasize education, and that leads to a better awareness of the different paths life can take.” 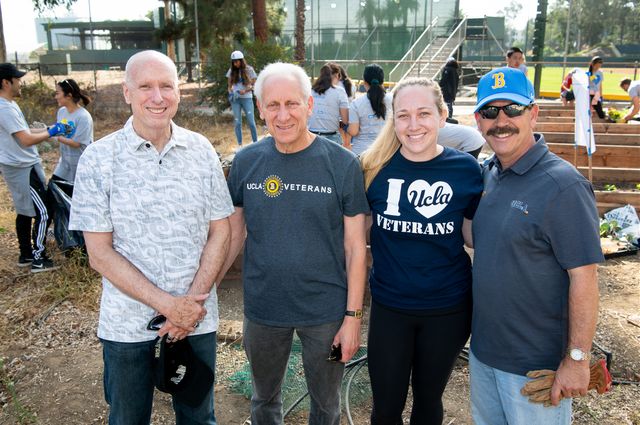 This morning, volunteers harvested leafy greens like kale, spinach and chard for a demonstration kitchen at the VA, spread mulch, and sanded down boards from piles of abandoned pallets left by the garden’s previous tenants, said Jesse Flores, who is getting his master’s in urban planning at UCLA and, like Gunnett, works as a program assistant for the garden.

“I’ve seen the potential that urban agriculture has, and here at the VA, I’m seeing how it can tie in with addressing homelessness, substance abuse and mental health,” Flores said. “This garden can be used not just to unite people but to really organize people to address these issues.”

Gunnett said he hopes that someday the project will expand to create a farmers market with employment opportunities for the VA vets, and meanwhile, he’s finding ways to turn broken-down planter beds and abandoned pallets into new planters.

“I feel like a kid with a Lego kit — we can build whatever we want at the garden,” Gunnett said.

And sometimes, he added, talking to people who aren’t students is as much a change of pace as being out in nature.

“I was pulling weeds with this one guy, a Desert Storm veteran, and it turns out we’re both heavily into music, so we ended up in this in-depth conversation about rock music,” Gunnett said. “Not exams. Not the military. These vets, they’re doing the same thing as me. In 20 or 30 years, I’ll be the old vet telling stories to UCLA students.”