As you travel around Westwood’s North Village this time of year, you can’t help but notice discarded couches, tables, mini-fridges and other bulky household items left behind by UCLA students who moved out.

As residents of the neighborhood, it didn’t take students Amir Hakimi and his friends Sam Asanad and Kian Asanad long to identify a problem.

“Seeing all of this senseless waste frustrated us because a lot of the furniture is really good quality,” said Hakimi, a neuroscience major who will begin his senior year this fall. “We thought it was a shame that it was just being wasted and thrown onto the streets when something good could be made out of it.”

It also didn’t take them long to develop a solution.

Their organization, Furnish the Homeless, which was founded in 2012, curbs the dumping by scheduling pickups of discarded items from students and others who live within a five-mile radius of UCLA. From there, student volunteers deliver these items to formerly homeless Angelenos who are living in transitional housing throughout the city. Drives are held at the end of spring, fall and winter quarters, with spring being the busiest season.

“These are people who need help,” said Hakimi. “We’re all on this earth together, and we should all be helping each other.”

To date, the volunteers have helped furnish 29 homes with more than 145 donated items.

“Our ultimate goal is that people won’t even think about dumping their furniture onto the streets anymore,” said Hakimi, adding that his group is working with students at UC Berkeley and UC Irvine to establish chapters of Furnish the Homeless on those campuses. “The second they want to get rid of an item, they’ll think of Furnish the Homeless, and we’ll be there. We’ll be there to collect those items and give them to individuals who could really use them. " 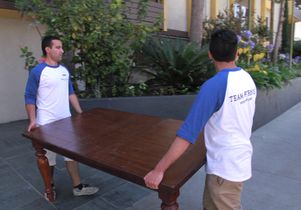 Although a piece of furniture or an appliance may seem like a small gesture, the impact can be enormous for the person on the receiving end.

“It means a lot to us vets to see that we can be embraced and accommodated in this manner … because we all put our lives on the line and fought for this country,” said Dan Walton, who had been eating his meals and sleeping on a mattress on the floor of his Inglewood apartment before Furnish the Homeless brought him a much-needed couch, bedframe and desk. “I owe you guys a boatload of gratitude, and I thank people like you.”

Walton is one of nine individuals who received donations during this quarter’s drive, which ends June 20.

Hakimi recalls the first individual they assisted, a man named Reuben who had lived on the streets for nearly two decades and was finally getting on his feet.

“He was about 6-foot, 7-inches tall,” said Hakimi, who was able to give him a queen-sized bed. “After we finished setting everything up, he said ‘Not only is this the first bed that fits me, it’s also the first bed I’ve had in 17 years.’ That was incredible.”

It’s these kinds of interactions that add value to the experience for the volunteers and for the donors, who are invited to come along for the delivery and to see where their donations are going. Additionally, Furnish the Homeless often posts pictures and videos of the items in their new homes to its Facebook and Instagram sites so that donors can share the good news with others.

“I have collaborated with many CEOs and founders of organizations, but Amir is the youngest and most efficient one I have had the pleasure of working with,” said David Haverim, of World Unity Organization, a local organization that donated a truck to Furnish the Homeless as well as some financial assistance to offset the cost of gas. “His humanitarian efforts at such a young age are outstanding, and his ability to induce a passion for community service among his peers is inspiring.”

Earlier this year, Furnish the Homeless was recognized with a certificate of appreciation from Los Angeles Mayor Eric Garcetti.

“Your service has been a great benefit to the City of Los Angeles,” the certificate reads. “Your community spirit and interest have helped make our city a better place to live and work.”

A history of community service

Hakimi said he was inspired to start giving back to the community after coming to campus when he was 17 to help transport patients from the old UCLA hospital into the newly opened Ronald Reagan UCLA Medical Center. He said that experience, coupled with UCLA’s commitment to community service, has challenged him to think beyond himself and help improve the lives of others.

In addition to Furnish the Homeless, Hakimi is involved with a variety of other campus organizations, including Swipes for the Homeless, which encourages students to donate excess meal plan points that can be turned into food donations. Hakimi has also volunteered at book and toy drives sponsored by the UCLA chapter of School on Wheels, which benefits homeless children in Los Angeles.

After completing his undergraduate degree, Hakimi has his sights set on enrolling in medical school and becoming a doctor so that he can continue to care for underserved populations, specifically the homeless in L.A.

This will be in addition to his continued work with Furnish the Homeless. “This is my baby,” Hakimi said. “This is an organization that I want to spend the rest of my life with.”