Off the coast of Long Beach, California, are four tiny islands. Decorated with palm trees and buildings, they look like just the place for a sunny getaway.

UCLA senior Valeree Catangay grew up a few miles away. She knew from her parents that the islands are a façade, built by oil companies to camouflage offshore rigs. But the reality of how those rigs affected her own life didn’t sink in until she took a “toxic tour” of the harbor earlier this year.

While traveling by bus, the group watched as a monitor measured pollution levels in real time, showing how air is less healthy in low-income neighborhoods of Long Beach, which, along with Los Angeles, is already ranked the fourth-worst city in terms of air quality in the United States. As the group visited the islands and other hazardous environmental facilities, such as a waste incinerator, she said “the air felt thick and smelled like gasoline” at certain times.

“That was a pivotal moment for me,” Catangay said. “I was already interested in environmental justice, but I didn’t connect it to my own community until that tour.”

The tour was part of a program from East Yard Communities for Environmental Justice, a local nonprofit that seeks to make the fossil fuel industry’s health impacts on low-income communities and communities of color more tangible. Catangay suffered from asthma and other respiratory problems as a child, living near the oil rigs, the Port of Long Beach and the 710 and 110 freeways.

Now she’s finishing a bachelor’s degree in environmental science from the UCLA Institute of the Environment and Sustainability. Her mission for the environment and social justice is just getting started, but she’s already built an impressive resume.

On Oct. 16, Catangay received a Brower Youth Award, one of six given each year to “outstanding youth leaders who are making strides in the environmental movement” from across the United States, according to the award website.

In September, she was of 200 young environmentalists invited to join top climate policymakers, researchers, activists and business leaders at the Global Climate Action Summit in San Francisco. There, she won a #YouthStepUp award as a representative of the California Allegory Youth Fellowship, a Bay Area collective of artists, poets and other creative activists who tell stories of environmental injustice and hope. As a winner, she was invited to speak at the summit, and talked about how art can stimulate immersive and inclusive experiences to inspire youth to take leadership roles on environmental action.

Catangay is also a UC Carbon Neutrality Fellow, spreading awareness about a University of California initiative to make all UC campuses carbon-neutral (releasing no net greenhouse gas emissions) by 2025. 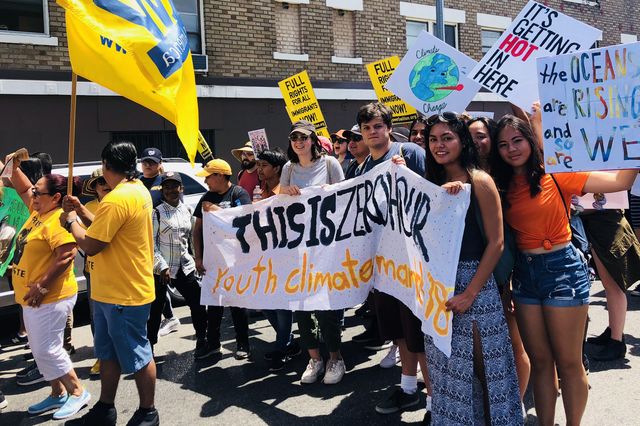 Here at UCLA, she plays a role in sustainability groups across campus, activism sparked by lifelong curiosity.

“I was always interested in learning more about nature and the environment,” Catangay said. “I joined a lot of clubs in high school and camped out as much as I could.”

Earlier this year, after realizing that there were no environmental justice clubs on campus, she co-founded the Environmentalists of Color Collective with another UCLA student, Emma Finn. The student organization builds community and sparks conversations on topics such as environmental racism and diversity in green science.

With the Environmentalists of Color Collective, Catangay works to inspire and empower communities that disproportionately feel the effects of environmental degradation. The group recently held a climate justice forum, where a panel of activists of diverse backgrounds related personal stories to a capacity crowd of 150.

“That wasn’t previously present at UCLA,” Catangay said. “Just having those dialogues can make an impact on students.”

The biggest news from the climate summit she attended last month was California Gov. Jerry Brown signing Senate Bill 100, which committed California to 100 percent renewable energy by 2045. Catangay said environmentalists need to go even further and do a better job of protecting all communities.

“Most of the speeches were stating accomplishments and goals of companies and organizations,” Catangay said. “I would have liked to see more ‘how can we improve the movement? and ‘how can we critique mistakes we made in the past?’”

One of those mistakes is failing to bring everyone to the table. Environmental professional and academic fields have long been criticized as white and male, especially in positions of leadership. Although ethnic minorities will make up half of the U.S. population by 2046, currently 86 percent of the workforce in environmental science and geoscience is white, with only 3.9 percent Hispanic, and only 2.7 percent black.

Last year, UCLA climate professor Aradhna Tripati launched the first university center for diversity in environmental science — the Center for Diverse Leadership in Science — to support women, people of color and other marginalized groups at every stage of their education and careers: from “K to gray.” With the Environmentalists of Color Collective, Catangay works collaboratively with Tripati and the center.

In addition to official summit sessions, Catangay attended protests and alternative events that provided critique and community-based solutions. Some of the criticism was leveled at Brown, widely seen as a leader on climate change, for failing to curb the oil industry. He approved more than 20,000 new wells during his time in office — 77 percent of which were in low-income communities or communities of color.

Catangay’s mission of inclusion applies to businesses, too, even ones from industries with bad environmental track records. She spent this summer working for a plastic bottle manufacturer, and envisions a future in private-sector sustainability.

For now, she’s looking forward to continuing her work at UCLA and the senior practicum, a yearlong project that pairs students with nonprofit organizations, government agencies and businesses to tackle real-world problems.

Somehow, she also finds time for fun, riding her longboard down empty parking lots, playing with Koda, her Australian shepherd, and drawing or illustrating on her computer. The images she comes up with fit nicely with her inclusive approach to sustainability: “You can tell stories without even knowing someone else’s language.”

In a field full of difficult news, she remains positive by looking to the future.

“What gives me hope is young people,” Catangay said. “My little brother and sister are still in middle school and high school. I know I have an impact on them and their perspective on the environment. They see how much I care about it.”

Editor’s note: This story was corrected on Oct. 25 to indicate that Senate Bill 100 committed California to 100 percent renewable energy by 2045.