Tyler Milles reunited with a former high school teacher in an unusual way — face-to-face in a soundproof studio at radio station KPFK in North Hollywood. Milles, then a second-year UCLA student, was there to interview D.J. Cook about his struggle to survive on a teacher’s salary.

Milles developed the radio segment from concept to final production as part of his job on a half-hour radio storytelling show called Re:Work Radio, produced by the UCLA Labor Center. The show, currently the only storytelling show in the country that focuses on worker issues, airs weekly on Fridays at 6:30 p.m. on KPFK, the Southern California Pacifica affiliate.

“It felt like my job actually helped someone that I knew, and I really wanted to help,” Milles said. “It was the first time I felt like I wasn’t just working a job for the money — it connected to my life in a real way. That’s not something that most people can say about their jobs, especially in college.”

Re:Work Radio trains UCLA students and people from the community in the art of storytelling and multimedia story production to bring to the forefront stories of workers who rarely catch the attention of mainstream media. Currently three UCLA students are working on the show alongside volunteers, including two recent graduates and a graduate student.

The show draws out real stories about individuals across the country — a taxi driver, a restaurant worker and a doula, among others — that redefine how most people think about work. Rather than relying on soundbites or technical economic jargon, the show dives deep into workplace issues by offering intimate first-hand narratives about how workers got where they are and how they are getting by.

“Our goal is to challenge stereotypes and transform the way people think about work,” said UCLA Labor Center research director Saba Waheed who co-produces the show with Stefanie Ritoper. “Work is becoming increasingly low-pay, temporary and scarce. Yet coverage of this work in major media outlets is often sparse and even negative. We believe that one of the best ways to open people’s minds is through stories of real people.”

Like other storytelling shows that have been gaining popularity in recent years, Re:Work begins with a live interview that producers then script and edit with music and voiceover. By participating in the show’s entire production process — interviewing, transcribing, script-writing, editing and promotion — students gain hands-on experience, Ritoper said. 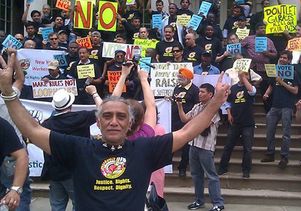 UCLA
Javaid Tariq, who grew up in Pakistan, became a DJ in Germany and now drives a cab, told his story on the Re:Work:Radio show.

Milles, for example, discovered that his former high school teacher Cook had written a piece for the Huffington Post entitled, “Living in a Converted Garage With a Master's Degree,” about his struggles to live above the poverty line while trying to pay off a crushing student loan. The piece spread like wildfire among Milles’ former high school classmates, many of whom considered Cook to be one of the most popular and engaging teachers at their school.

Milles, who had been working with Re:Work radio for several months, immediately pitched the story idea. He then worked through the entire production process to create a show that aired on KPFK. The experience was gratifying for Milles, and he’s not alone.

“I remember listening for the first time to the ‘Get Up, Stand Up’ story and tearing up,” said Clarine Ovando-LaCroux, a graduate of UCLA’s urban planning program who volunteered with Re:Work. “It was if I was watching a movie.”

“What I loved most was that Javaid’s story showed the suffering and struggle he felt while working as a taxi driver, but it also brought out plenty of hope and beauty,” Ovando-LaCroux said.

Ovando-LaCroux also had the opportunity to produce her own episode. She interviewed a friend and mentor, Mac, who had lived on the streets for many years. Airing earlier this year, the episode, called “A Hand Up,” lent some insight on the problem of homelessness, but also spoke to the remarkable friendship that she and Mac developed.

Many of the ideas for stories come from the UCLA Labor Center’s broad network of community and labor groups. Past shows have featured stories from the Los Angeles Black Worker Center, the Koreatown Immigrant Workers Alliance.and other.

Re:Work recently received a Cal Humanities “California Stories” grant and is using the funding to produce an upcoming episode on garment workers. Part of the production process will include working with the Garment Worker Center in Los Angeles to host storytelling workshops with garment workers.

“We don’t have to go far to find stories because our center partners so closely with community organizations in all of our work,” said Ritoper. “It's rare to find a radio show that has compelling stories and also a deep understanding of the issues.”

You can listen to past Re:Work episodes at www.reworkradio.org. Click “Episodes.”