UCLA senior Christian Green had high expectations when he traveled to Washington, D.C., with Chancellor Gene Block and student leaders to examine race, immigration and other important issues with leaders from Congress, the White House, and cultural and advocacy groups.

“I left in hopes of gaining an understanding of what this ideal of diversity really meant to the people on Capitol Hill, and to our chancellor, the faculty and my fellow student leaders on this trip,” said Green, a fourth-year sociology and African-American studies major who is external relations director for the pre-law fraternity Kappa Alpha Phi. “I wanted to leave D.C. feeling empowered as a leader here at UCLA … and that we, as a campus, could create this ideal of solidarity here at UCLA.”

Green, active with a student group that supports African-American transfer students like him, said this week that his “expectations were far surpassed.” 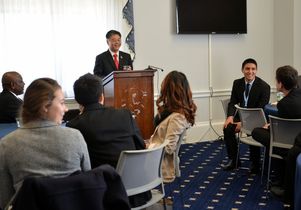 The Dec. 15-18 trip was organized by the chancellor’s office. Fifteen undergraduate students representing a range of campus organizations were selected from among 150 applicants for the trip intended to facilitate frank conversations about race, diversity and immigration in America. Faculty members also joined the trip.

“This was an opportunity for our students to learn about the history and the current realities of various populations, have some difficult discussions, and reflect on their own attitudes and beliefs,” Block said. He said he hopes the students will use what they learned to help build stronger relationships and better inter-group cooperation at UCLA.

The delegation also visited the Human Rights Campaign office, the U.S. Holocaust Memorial Museum, the Martin Luther King, Jr. Memorial, the Lincoln Memorial, the Washington Monument, the National Museum of the American Indian and the Newseum.

Second-year student Stephanie Gonzalez said she wanted to make the trip to better understand how some can be uninformed about the perspectives of others. Gonzalez, an undergraduate researcher at the UCLA Center of Educational Assessments and a member of a student organization that supports college-going among Latinas/os, said it comes down to communication.

“It sounds so simple and natural, but it is something that people can lack," Gonzalez said. "I realized that it was something that I, at times, had lacked. At UCLA, we have students from all over the world and from different walks of life, but even though I sit next to them in class or pass them in the hallway, a dialogue as beautiful as the one I had on this trip is not being had.”

After learning more about President Obama’s White House Initiative on Educational Excellence for African Americans, Green said he plans to become a more active advocate for higher education among those living in under-resourced communities, including the Antelope Valley, where he works as a youth pastor. He also is working to produce a video promoting solidarity among various campus communities and collaborating with other students in the delegation on a separate video that will chronicle their visit to D.C.

“I learned so much from my colleagues, the faculty and the chancellor,” Green said. “UCLA is serious about changing and improving our campus climate. ... D.C. taught me change does not happen overnight, but it is possible.”

The students and the chancellor are scheduled to meet Feb. 1 to reflect on what was learned during the visit to Washington.