Raquel Sanchez knows what it’s like to work day after day under the sweltering sun. Originally from Michoacán, Mexico, Sanchez spent her first seven years in the United States picking grapes, cherries and tomatoes for some of the largest growers in California’s Central Valley.

“I saw many of my coworkers get sick because of the heat,” she said, including one coworker who was so seriously affected that Sanchez had to perform first aid on her. “I always protected myself and tried to help my coworkers.”

When outdoor temperatures climb, workers who harvest food, build homes, deliver mail, tend gardens, or distribute goods may suffer serious health consequences. According to the federal Occupational Safety and Health Administration, nationwide exposure to environmental heat led to 37 work-related deaths and an estimated 2,830 injuries and illnesses that forced people to miss work in 2015, the latest year for which these statistics are available. And as climate change brings more frequent and severe heat events, the risks for people who work outdoors are only expected to increase.

So when Sanchez, who now works as a community health promoter with Campesinas Unidas del Valle de San Joaquin, heard that she could attend a class sponsored by UCLA’s Labor Occupational Safety and Health Program, which goes by UCLA-LOSH, to learn to teach others to prevent heat illness, she jumped at the chance to participate.

In response to several heat-related deaths among California agricultural workers and pressure from worker advocates, California enacted a standard in 2006 to prevent heat illness among outdoor workers. The regulation requires employers to provide drinking water, breaks, shaded cool-down areas and other resources, with additional requirements when temperatures exceed 95 degrees. Only two other states offer similar protections. (A campaign is currently underway to advance a heat illness prevention standard at the national level.)

“This training initiative was a response to the continuing need for community-level education and capacity building to ensure workers have adequate heat protections,” said Linda Delp, director of UCLA-LOSH and adjunct associate professor in the UCLA Fielding School of Public Health.

Part of UCLA’s Center for Occupational and Environmental Health and its Institute for Research on Labor and Employment, UCLA-LOSH is well-qualified to lead these efforts. The program has served as a safety and health resource for California workers since 1978, and it participated in a statewide heat illness prevention initiative from 2010–12, sponsored by the California Department of Industrial Relations.

This summer’s courses, funded by grants from the National Institute of Environmental Health Sciences’ Worker Training Program and the California Commission on Health and Safety and Workers’ Compensation, were designed as training-of-trainers for community health promoters and worker-leaders like Sanchez. UCLA-LOSH staff partnered with colleagues at the UC Berkeley Labor Occupational Health Program and with local community-based organizations to host four day-long training sessions in Los Angeles, Santa Rosa, Porterville and Lindsay. 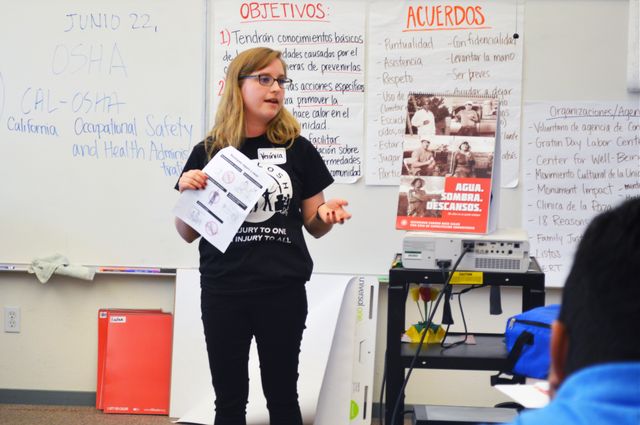 The curriculum was designed to both raise awareness of heat as a hazard that particularly affects low-wage workers and vulnerable communities, and to develop participants’ education and advocacy skills, according to Deogracia Cornelio, UCLA-LOSH associate director of education who led the Los Angeles training session. Trainees learned about common signs and symptoms of heat illness, recommended preventive steps, and requirements of the California heat standard. They were then expected to carry out short education sessions with other members of their communities.

The training sessions enrolled about 100 people who in turn have reached close to 600 others, including workers in agriculture, landscaping, construction, garment manufacturing, warehousing and other industries. While the four classes were conducted in Spanish, some participants have gone on to lead education activities in other languages, such as the indigenous Mexican languages of Mixteco and Triqui.

“I didn’t know that heat could have such serious consequences as death,” said Adriana Lúa, a grape packer who participated in the training held in Lindsay in California’s Central Valley. “I’ve been able to share this information with my team members at work as well as my family at home.”

Another participant, Jose Rojas, reflected on the importance of workers knowing the California requirements that employers provide water, shade and rest.

“I used to go under the vineyards to seek shade, or we had to make our own shade,” Rojas recalled of the days before enforcement of the California standard. “Breaks were very short, and we had to go searching for water. I saw many people suffer because of the heat.”

Veronica Ponce de Leon, who facilitated three of the heat trainings for UCLA-LOSH, said that even though the conditions are getting hotter each year, the dangers of heat aren’t discussed enough.

“The participants appreciated how we presented heat as a topic that everyone could relate to and that they could teach to others,” Ponce de Leon said. The people taking each class received handouts, training guides and other materials they could use in their education efforts, and they had the chance to practice their teaching skills throughout the day.

Ponce de Leon marveled at the creative ways these trainers are now reaching others. “I’ve seen pictures of trainers doing heat education not only at work sites but in their homes, at Tupperware gatherings, in Zumba classes, and in many other places where you wouldn’t expect people to take the opportunity to spread the message.”

Beyond educating workers about heat, Cornelio noted the importance of this initiative in providing individuals with the knowledge, skills and confidence to become leaders their communities. Many training session participants concurred. “The course made me relive past experiences working in heat but also to learn about workers’ rights,” Sanchez said. “We learned valuable techniques for sharing this information with the public and to develop our leadership skills.”

Asked what message she now has for outdoor workers, Sanchez didn’t hesitate to respond: “Your health comes before everything else. You have to be healthy to work and feed your family.”